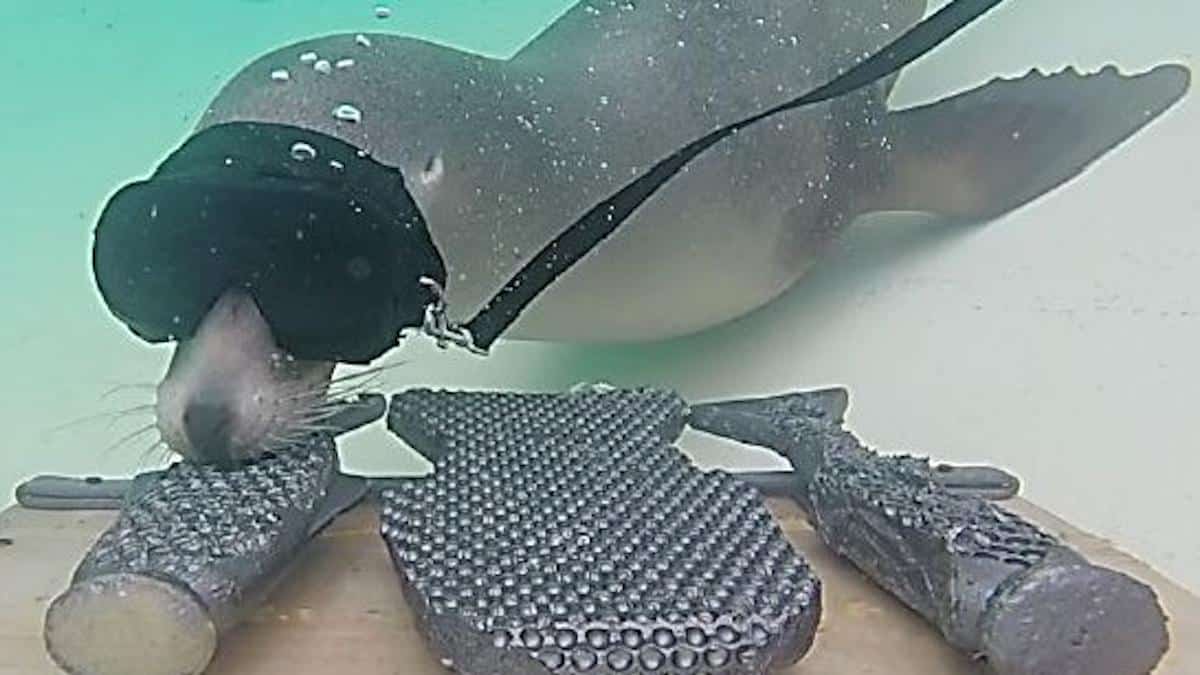 The answer is that both humans and sea lions use their appendages in a “task specific” way. That is, both species move our fingertips or whiskers differently depending on what we want to feel about a particular object. At least that’s what a team of scientists discovered after working with a sea lion named Lo.

“Not only are whiskers touch sensors, much like our fingertips, but the specific movement strategies that we see Lo make with her whiskers are also the same that humans make with our fingertips, which is super interesting,” study coauthor Robyn Grant, a senior lecturer in comparative physiology & behaviour at Manchester Metropolitan University, told EcoWatch in an email. “So they are probably common and important movement strategies for active touch sensing.”

If humans want to know if something is soft or hard, we give it a squeeze. If we want to know the texture of a fabric, we run our fingertips over its surface. These are both examples of “task specific” movements, as Grant explained in The Conversation.

While we are used to using our fingertips to make sense of the world in this way, these movements are actually pretty unique. For most other mammals, fingertips are not the most sensitive and mobile bodypart. That honor goes to whiskers, which are touch sensitive and help animals find food, get a feel for objects and guide their movements.

The new research published in the Journal of Experimental Biology this month proves that at least one mammal can and does.

In order to study whether mammals could use their whiskers in a touch-specific way, the scientists first had to pick a mammal to study. They chose a California sea lion named Lo.

Pinnipeds, which include sea lions, seals and walruses are particularly helpful to study because their whiskers are thick and long and therefore easier to measure. The research team settled on California sea lions specifically for a number of reasons.

Study coauthor Alyx Milne, who works at Manchester Metropolitan University and Blackpool Zoo in the UK, trained Lo along with fellow Blackpool Zoo trainers Charlie Black and Gary Jones. It is common to work with only one animal in marine mammal studies, Grant explained in The Conversation, but it does mean that researchers need to collect a lot of good data.

Luckily, that wasn’t a problem with the animal they chose.

“Lo was an absolute dream to work with,” Grant told EcoWatch. “She seemed to really enjoy the study, and always worked really hard and professionally.”

The scientists taught Lo how to perform three different kinds of tasks:

They then recorded video footage of Lo performing the tasks thousands of times and discovered that she did indeed move her whiskers in different ways for different tasks.

“[S]he strokes her whiskers over an object’s surface to feel texture, and feels around the edges of an object to judge size,” Grant told EcoWatch.

These are the same kinds of motions that humans make with our fingertips when we want to feel the texture or size of an object.

While the study focused on Lo, the researchers also caught other California sea lions on camera making similar movements, which means this might be a common behavior for the species.

Why Does This Matter?

While it’s fun to think about what we might have in common with a marine mammal, why is it important that sea lions can use their whiskers in a task specific way?

“Being able to adopt different touch sensing movement strategies shows that mammals can precisely control their whiskers’ movements and draw on their past experiences in order to pay attention to important aspects of an object – the edges of shapes and the surfaces of textures, for example,” Grant explained to EcoWatch. “This means that they have a high level of control over their sensory perception, and is an excellent step in understanding more about mammalian sensing, perception and cognition.”

The next step is indeed to see if other mammals use their whiskers in the same way. Milne has received a Biotechnology and Biological Sciences Research Council fellowship to study this behavior in harbour seals and South African fur seals and Grant has secured Royal Society funding to study whisker movements in other pinnipeds as well as otters and foxes.