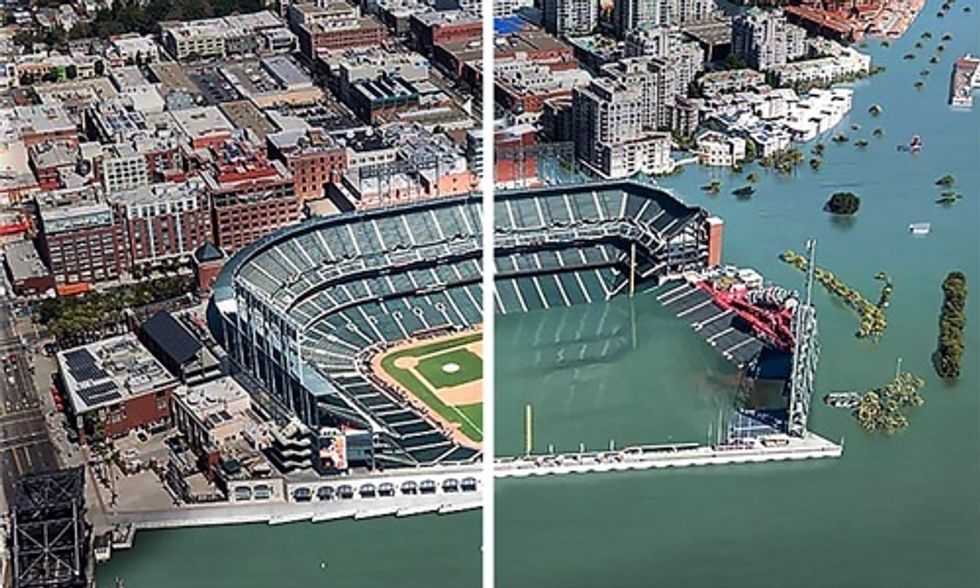 Sea levels in the 20th century rose faster than at any time in the last 3,000 years. And in the 21st century, the tides will climb ever higher—by at least 28 cms (11 inches) and possibly by as much as 130 cms (51 inches), according to two new studies.

Human activity is implicated in both studies and although neither delivers a new conclusion, each represents a new approach to studies of sea level rise as a consequence of climate change and each is a confirmation of previous research.

What sea level rise could look like at the AT&T Park in San Francisco. Photo credit: Climate Central

Robert Kopp, a climate scientist and Earth historian at Rutgers University in the U.S. and colleagues reveal in the Proceedings of the National Academy of Sciences that they tried to look at the greenhouse century—the 100 years in which oil, gas and coal combustion began to change the mix of carbon dioxide in the atmosphere and trigger a rise in planetary average temperatures—in the context of the last 27 centuries.

They compiled a geological database that stretched back to the Bronze Age, which lasted, with regional variations, from the fourth to the first millennium before the Christian era. And they developed a new statistical approach to examine the sea-level indicators retrieved from marshes, coral atolls and archaeological sites around the world.

What sea level rise could look like at the Statue of Liberty in New York City. Photo credit: Climate Central

They report that although sea level rise might have happened without human action, it would have been less than half the observed 20th century increase and might even have fallen.

Had humans not piled greenhouse gases into the atmosphere, more than half the 8,000 coastal floods recorded at U.S. tide gauges in the last century might never have happened. On average, sea levels rose 14 cms between 1900 and 2000.

“The 20th century rise was extraordinary in the context of the last three millennia—and the rise over the last two decades has been even faster,” Dr. Kopp said.

In the same journal, a team led by Matthias Mengel, a postdoctoral researcher at the Potsdam Institute for Climate Impact Research, Germany, report that they took a new look at what might happen to sea levels before 2100.

They modeled three scenarios for greenhouse gas emissions, incorporated the latest 20th-century data on melting glaciers and warming oceans and played with the mathematical approach in a new way to predict a set of outcomes.

The most hopeful—based on the agreement by 195 nations last December at the UN climate change conference in Paris—led to a projected increase of between 28 and 56 cms. The most alarming outcome proposed a possible range of sea level rise from 57 to 131 cms.

What sea level rise could look like at the Ocean Drive in Miami. Photo credit: Climate Central

The two studies are designed to give practical information to city authorities and coastal planners.

Even a 60 cm rise means nations will have to think about coastal protection.

“With all the greenhouse gases we have already emitted, we cannot stop the seas from rising altogether, but we can substantially limit the rate of the rise by ending the use of fossil fuels,” said Co-Author Anders Levermann, a professor of climate system dynamics who is based both at Potsdam and at Columbia University’s Lamont-Doherty Earth Observatory in the U.S.

“This is quite a challenge, but less expensive than adaptation to unabated sea level rise, which in some regions is impossible,” Prof. Levermann said. “If the world wants to avoid the greatest losses and damage, it now has to rapidly follow the path laid out by the UN climate summit in Paris a few weeks ago.”

6 Stunning Images Show Sense of Urgency to Act on Climate