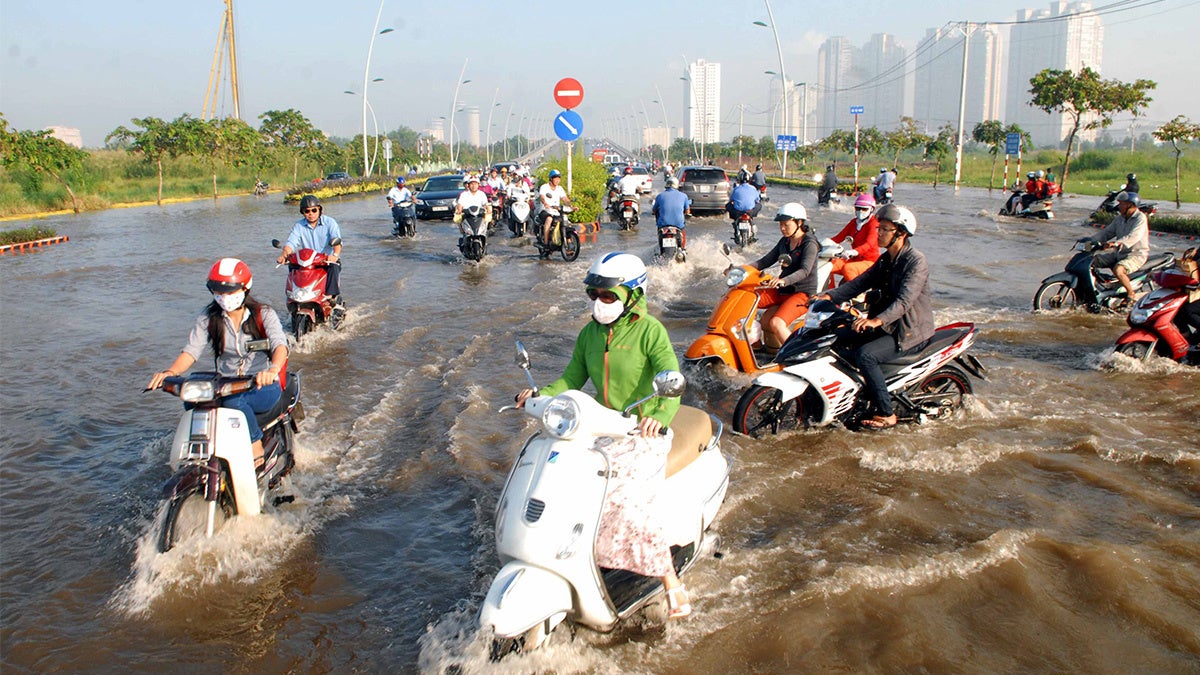 High-tide flooding in Ho Chi Minh City, which could be largely underwater by 2050, according to a new study. Vietnam News Agency / AFP via Getty Images

If greenhouse gas emissions are not reduced, 300 million people could face a once-a-year flooding event by 2050, The Guardian reported, far higher than the current estimate of 80 million. By the same year, the homes of 150 million people could be permanently below the high-tide line. The figures are even higher for 2100. Depending on how successfully emissions are reduced, yearly coastal flooding could impact between 280 and 640 million people by century’s end, and between 140 and 520 million could see their homes permanently swallowed.

“These assessments show the potential of climate change to reshape cities, economies, coastlines and entire global regions within our lifetimes,” lead study author and Climate Central senior scientist Scott Kulp told The Guardian. “As the tideline rises higher than the ground people call home, nations will increasingly confront questions about whether, how much and how long coastal defences can protect them.”

The higher figures come from a new model developed by the Climate Central team called CoastalDEM. While NASA satellite data includes the tops of buildings and trees in its elevation measurements, CoastalDEM uses machine learning to correct for this, leading to more accurate elevation readings, especially in the densely-populated areas most at risk for sea level rise.

“For all of the critical research that’s been done on climate change and sea-level projections, it turns out that for most of the global coast we didn’t know the height of the ground beneath our feet,” study co-author Dr. Benjamin Strauss told CBS News. “Our data improve the picture, but there is still a great need for governments and aerospace companies to produce and release more accurate elevation data. Lives and livelihoods depend on it.”

The impacts of sea level rise will be most keenly felt in Asia, the study found. More than 70 percent of the people likely to be impacted live in China, Bangladesh, India, Vietnam, Indonesia, Thailand, the Philippines and Japan.

In some of those countries, sea level rise could sink major cities by mid-century, as The New York Times pointed out.

According to the new estimates, Vietnam’s southern half will be largely underwater at high tide, including most of Ho Chi Minh City. Much of Bangkok, Shanghai and Mumbai would also be inundated.

“So this is far more than an environmental problem,” he said. “It’s a humanitarian, security and possibly military problem too.”

“As shocking as these findings might be, there is a silver lining: They give us the knowledge we need to take action in time to protect millions, and to avoid the economic and political upheaval that a climate disaster on this scale could bring,” he said, according to CBS News.

Correction: An earlier version of this article incorrectly stated that between 280 and 640 people could experience yearly flooding by 2100 and between 140 and 520 could see their homes permanently inundated by that date. It has been changed to reflect the fact that it is actually between 280 and 640 million people who will experience yearly flooding and between 140 and 520 million who could permanently lose their homes.