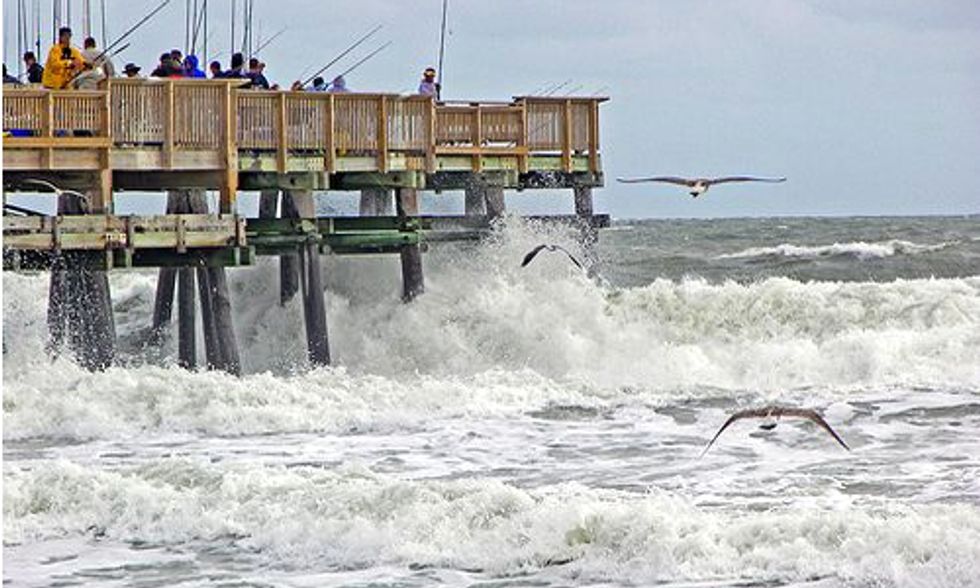 While the climate change debate continues in some quarters in Washington, the impact of sea-level rise cut across political divides at the “Rising to the Challenge” conference in Norfolk, VA, earlier this week. Members of Congress and Virginia mayors from both political parties joined military, state and local officials to discuss the challenges sea level rise presents to the Hampton Roads area, as well as how to promote federal, state and local action.

Communities in the Hampton Roads region such as Norfolk, VA, are at the front lines of sea level rise. Photo credit: Bud, Flickr

“We cannot afford to do nothing, it is time to act,” Mayor Sessoms said, underscoring that the impacts of climate change are not a political issue, but a backyard issue threatening communities in Virginia.

Coastal communities in southeast Virginia are at the front lines of sea-level rise. Sinking land and rising seas have combined to produce the fastest rates of sea-level rise along the U.S. East Coast for the Hampton Roads region, which is comprised of Virginia Beach, Norfolk, Hampton and 14 other localities in Southeast Virginia. Sea levels have risen more than 14 inches since 1930.

“Since it’s our highest probability, highest impact threat, why don’t we address it as such?” asked Norfolk’s Director of Emergency Preparedness and Response Jim Redick when discussing the significance of sea-level rise. Hampton Roads is the second-most affected by sea-level rise in the nation and has the second-largest population center at risk from sea-level rise. Norfolk officials estimate the city will need at least $1 billion in the coming decades to replace current infrastructure and keep water out of the city’s homes and businesses.

Military Is Speaking Up

Sea-level rise also threatens the region’s numerous major military facilities, including Naval Base Norfolk, the world’s largest naval base and the most vulnerable such base to rising seas, according to Rear Admiral Kevin Slates.

“This is a matter of national security,” said the National Security Council’s Hill. “It’s a mission-readiness issue.”

This unique threat to the region has led the Department of Defense to partner with local and state government, local businesses and the community to work together on strategic, long-term regional planning on coastal resilience.

When pressed by panelists on how much sea-level rise the area will confront in the future, Rear Admiral John White explained that we can prevent the worst consequences if we address the root of climate change and “stop putting CO2 in the atmosphere.”

The conference was the latest in a series of events demonstrating that climate change need not be a partisan issue. A report called Risky Business: A Climate Risk Assessment for the US, released June 24 by former Secretary of Treasury Hank Paulson, former New York Mayor Michael Bloomberg and entrepreneur Tom Steyer, provides a comprehensive valuation of financial risks the U.S. faces from climate change. While the report delves into agricultural, health and other climate impacts, it specifically calls out threats to coastal communities from sea-level rise and storm surges. It warns that within the next 15 years, higher sea levels alone will likely increase the average annual cost of coastal storms along the eastern seaboard and Gulf of Mexico by $2 billion to $3.5 billion.

That risk was evident at the June 30 conference in Norfolk. “What is the cost if we don’t do anything?” asked Virginia Beach Republican Mayor Sessoms. “I think we’re going to see some numbers that are going to be staggering.”

Sessoms’ concern echoed testimony on June 18 from four Republican former EPA Administrators before the Senate Environment and Public Works Committee on the urgent need for action on climate change. The former administrators also voiced their support of the EPA’s plan to regulate greenhouse gases from existing power plants.

Moving from Diagnosis to Prescription

The “Rising to the Challenge” conference showed that on the local and state level, there is strong bipartisan support and agreement that the problem of sea-level-rise facing Hampton Roads, its citizens, property and assets is an urgent one. It demands action and commitment to work together on solutions. “We have to move from endless diagnosis to prescription,” Sen. Kaine said. The engaged community in Hampton Roads is united by a sense of urgency and poised to grapple with this threat. We hope leaders in Washington and elsewhere are watching this example of elected officials doing what they are meant to do: working together to respond to their constituents’ problems.