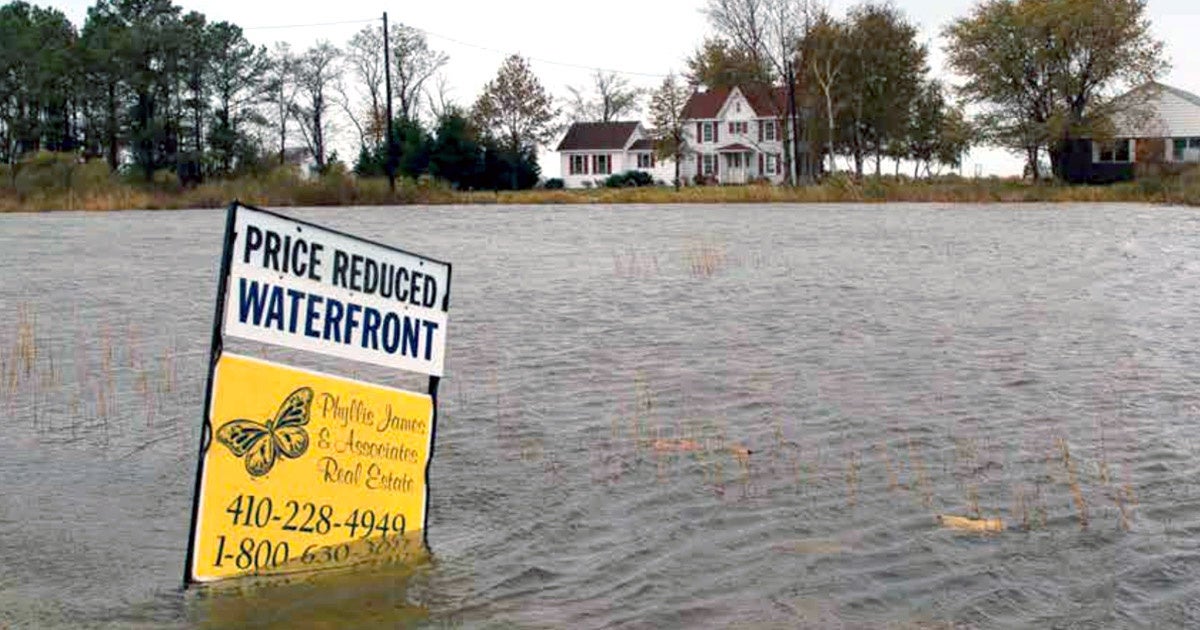 As an iceberg the size of Delaware broke away from an ice shelf in Antarctica Wednesday, scientists released findings that up to 668 U.S. communities could face chronic flooding from rising sea levels by the end of the century.

More than 90 communities are already grappling with “chronic inundation” from sea level rise caused by climate change—meaning they have crossed the threshold for when “flooding becomes unmanageable for people’s daily lives,” disrupting “people’s routines, livelihoods, homes and communities.”

When Rising Seas Hit Home, the new report from the Union of Concerned Scientists (UCS), found that number could nearly double, to 170, over the next two decades.

Coastal sections of Louisiana and Maryland account for the majority of the communities that are currently experiencing heavy flooding, but UCS researchers predict these unmanageable floods will reach the Jersey Shore and Florida’s Gulf Coast by mid-century.

By 2100, they calculate 40 to 60 percent of all oceanfront communities on the East and Gulf Coasts, and a growing number of West Coast communities, will be inundated with chronic flooding. At-risk regions include major cities like Boston, Savannah, Fort Lauderdale, Newark and four of New York City’s five boroughs.

“We hope this analysis provides a wake-up call to coastal communities—and us as a nation—so we can see this coming and have time to prepare,” said Erika Spanger-Siegfried, a UCS senior analyst and co-author of the report, the first study of its kind to examine potential flood risks for the entire coastline of the lower 48 states.

The UCS researchers also considered which cities may be spared from the worst of the flooding if the Paris agreement goals are met. Although Donald Trump withdrew from the climate agreement, many U.S. state and community leaders have committed to upholding it.

“Meeting the long term goals of the Paris agreement would offer coastal communities facing chronic flooding their best chance to limit the harms of sea level rise,” said Rachel Cleetus, UCS’s lead economist. The UCS researchers considered which cities may be spared from the worst of the flooding if the Paris agreement goals are met.

Although “large-scale reductions in global warming emissions,” which are among the Paris agreement’s main goals, “may slow the rate at which sea level rise is accelerating and save many communities,” the report noted for many communities, it’s too little, too late.

“For hundreds of other cities and towns,” it said, “increased flooding is inevitable, and adaptation is now essential.”

Some communities are already making efforts to address flooding by raising roads, raising or constructing sea walls and installing pumping systems. Miami Beach has started work on a major flood prevention project that is expected to cost the city hundreds of millions over the next several years. Although Miami Beach Mayor Philip Levine has been lauded for embracing climate science and taking action to address the flooding, his plan has also been criticized by climate deniers and experts alike.

“There’s no playbook for this,” Levine said to the Miami New Times. “There’s no one saying, ‘Here, mayor, follow these 20 easy steps and you’ll be OK.”

The scientific community is increasingly looking for ways to engage with policymakers and the public. The UCS report made a number of policy recommendations based on its analysis, and this week, a group of more than 300 scientists from around the world are meeting in New York City to review current sea-level science and beginning discussions about collaborating on future research.

“We have a special responsibility to help society respond to the climate issue,” said Guy Brasseur of the World Climate Research Programme, one of the conference organizers, urging the conference attendees to invest heavily in sea-level rise research.

But even with access to robust scientific information about these issues, environmental policies can take a backseat when certain social issues are more politically convenient, or in communities without the financial means to develop and implement massive prevention projects like the one in Miami Beach.

More than half of the 170 communities most at-risk for flooding over the next two decades encompass socioeconomically vulnerable neighborhoods, the UCS report noted—”similar to the proportion of today’s chronically inundated communities.”

The Eastern Shore of Maryland, one of the regions currently experiencing some of the worst chronic flooding, “is home to a large elderly population on fixed incomes and a large African American population, two groups that have traditionally had fewer resources to cope with environmental disasters and change,” the report noted.

“This analysis brings attention to the fact that these communities will need more resources and more capacity in order to prepare for the impacts of sea level rise. Fair solutions will be those that include considerations of socioeconomic vulnerability and are implemented equitably across communities.”