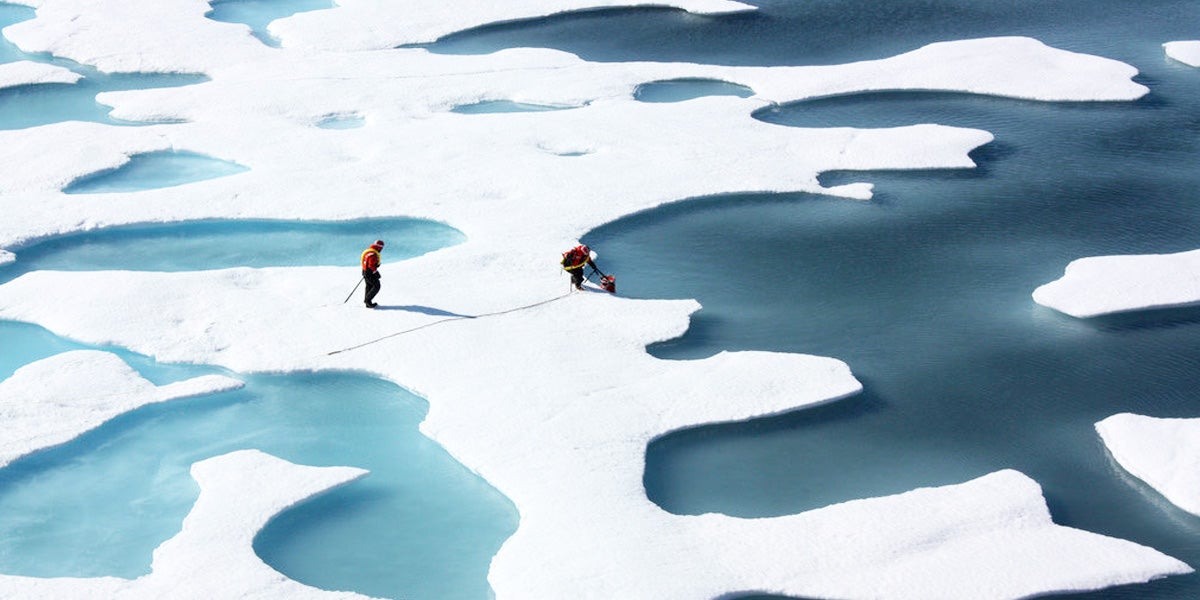 The Arctic and Antarctic have experienced record lows in sea ice extent so far in 2017, according to the latest data from the U.S. National Snow and Ice Data Center (NSIDC).

At about this time each year, the Antarctic reaches its lowest extent for the year while the Arctic reaches its highest. The new satellite data, released Wednesday, confirms that there is less sea ice globally than at any time in the entire 38-year satellite record.

The NSIDC doesn’t usually release data for both poles simultaneously, but has done so this time because of what scientists have dubbed an “exceptional” year in 2017.

The news comes as the World Meteorological Organization confirmed this week that 2016 “made history” with record high global temperatures and low sea ice. Many of last year’s extreme conditions have continued into 2017, the report noted.

With just 14.42m square kilometers on March 7, this year’s winter maximum in the Arctic ranks as the smallest in the satellite record, for the third year in a row.

Record low sea ice extent in February continued a string of records over the winter months, from October through February. A “heatwave” in mid-November caused some parts of the Arctic to be 15ºC warmer than usual, for example. 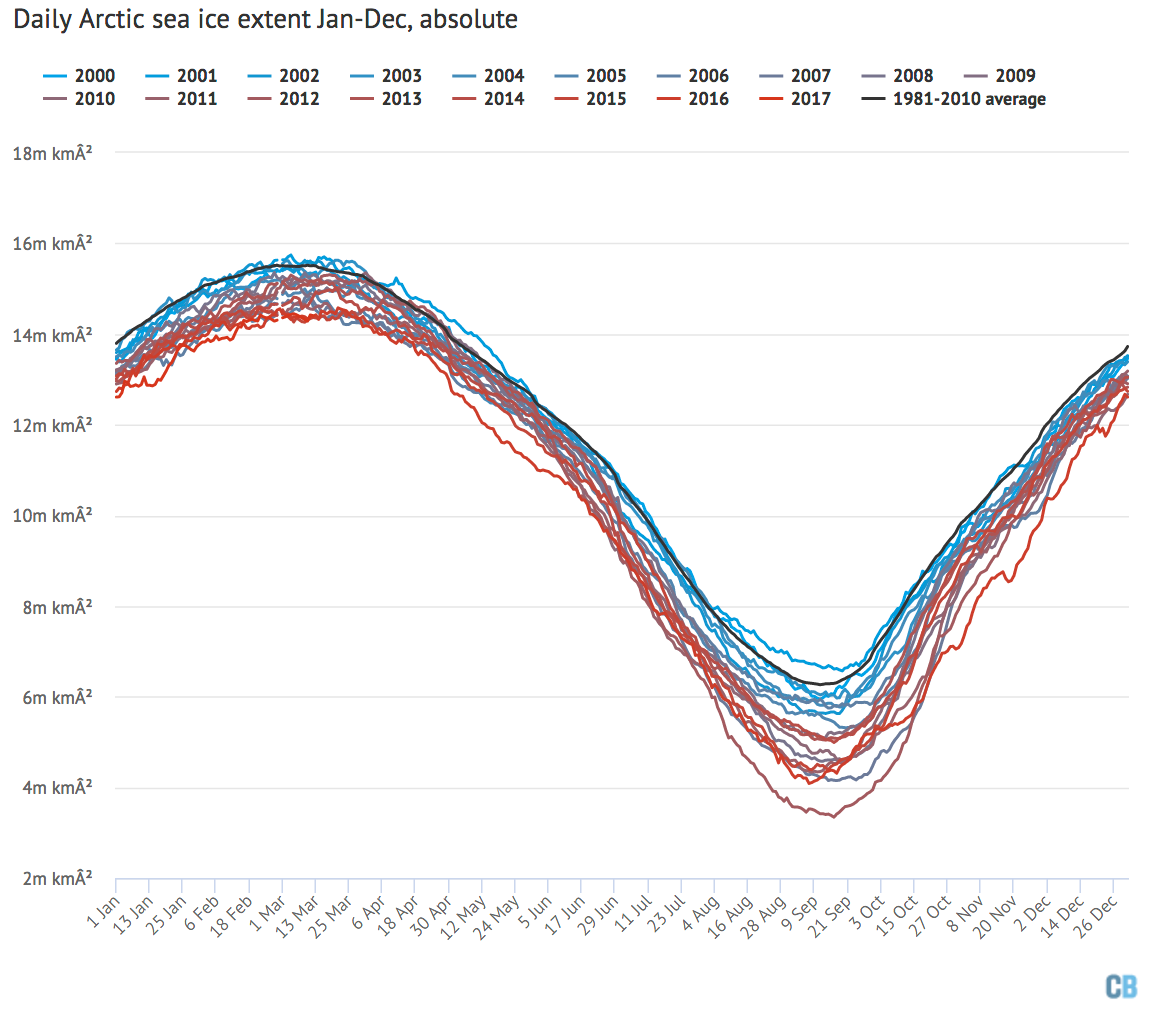 The Arctic winter maximum has been shrinking by about three percent per decade. The decline is much faster for the summer minimum in September, at more like 13 percent per decade. Recent research shows up to two-thirds of the drop is a direct result of human activity.

Ice lost from the Arctic can have consequences much further afield, as a new WMO report explained:

“Scientific research indicates that changes in the Arctic and melting sea ice is leading to a shift in wider oceanic and atmospheric circulation patterns. This is affecting weather in other parts of the world because of waves in the jet stream—the fast-moving band of air which helps regulate temperatures.”

As we enter 2017’s summer melt season, Arctic sea ice looks vulnerable. This is especially so, given that the latest sea ice thickness observations from the CryoSat-2 satellite show very thin ice in a number of regions, said Zack Labe, a PhD student studying sea ice at the University of California. That said, it’s too soon to tell if we’ll see a record low minimum come September, he told Carbon Brief:

“Weather has a big role in the summer melt season, so speculations are challenging as to whether 2017 will be a new record minimum.” 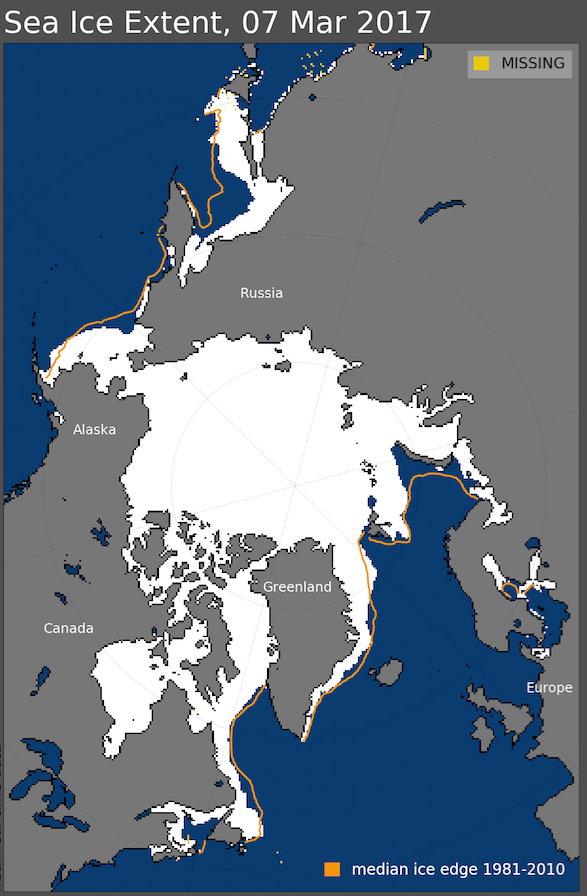 While the behavior of Arctic sea ice tends to attract the biggest headlines, the continent of Greenland has been experiencing unusual weather this winter, too.

Despite some periods of extreme cold, this winter has been much warmer than average, according to Polar Portal, a website run by Danish researchers. A succession of heavy storms since October dumped more snow than usual on the eastern and southern parts of ice sheet, the scientists explained:

“The accumulation season got off to a flying start in October, when a series of large storms hit the east coast of Greenland, dropping 264mm of rain in the main town of Tasiilaq in 25 days, compared to the average for October of 83mm for the whole of October.”

Top: Map of ice mass lost (red) and gained (blue) from the surface of Greenland through snowfall between Sept. 1 2016 and March 20 (in mm water equivalent) Bottom: Change in surface ice mass during winter 2016/17 compared to previous years. Danish Meteorological Institute

But while some claim this extra snowfall over winter means Greenland ice is at “record high” levels, this ignores a much bigger part of the picture. Icebergs “calving” off the ice sheet and into the ocean account for much bigger losses, explained Dr. Ruth Mottram, a researcher at the Danish Meteorological Institute. She told Carbon Brief:

“Over the last decade, Greenland has lost around 200-300bn tonnes (gigatonnes, Gt) of ice each year; the extra snowfall we estimate from our models is about 150Gt. So it’s not at all balancing what is lost by melting and calving in a typical year.”

The summer months—June, July and August—are the most important for the ice sheet, so it’s important not to read too much into heavy snowfall over the winter season, Mottram added.

“Exceptional Year” in the Antarctic

Meanwhile, at the other end of the planet, Antarctic sea ice has been experiencing its minimum extent for the year.

With 2.11m square kilometers of ice, this year’s low marks an all-time record low for the satellite era. Reached on March 3, the summer minimum caps off an unusually vigorous melt season, with new records set in every month since November. 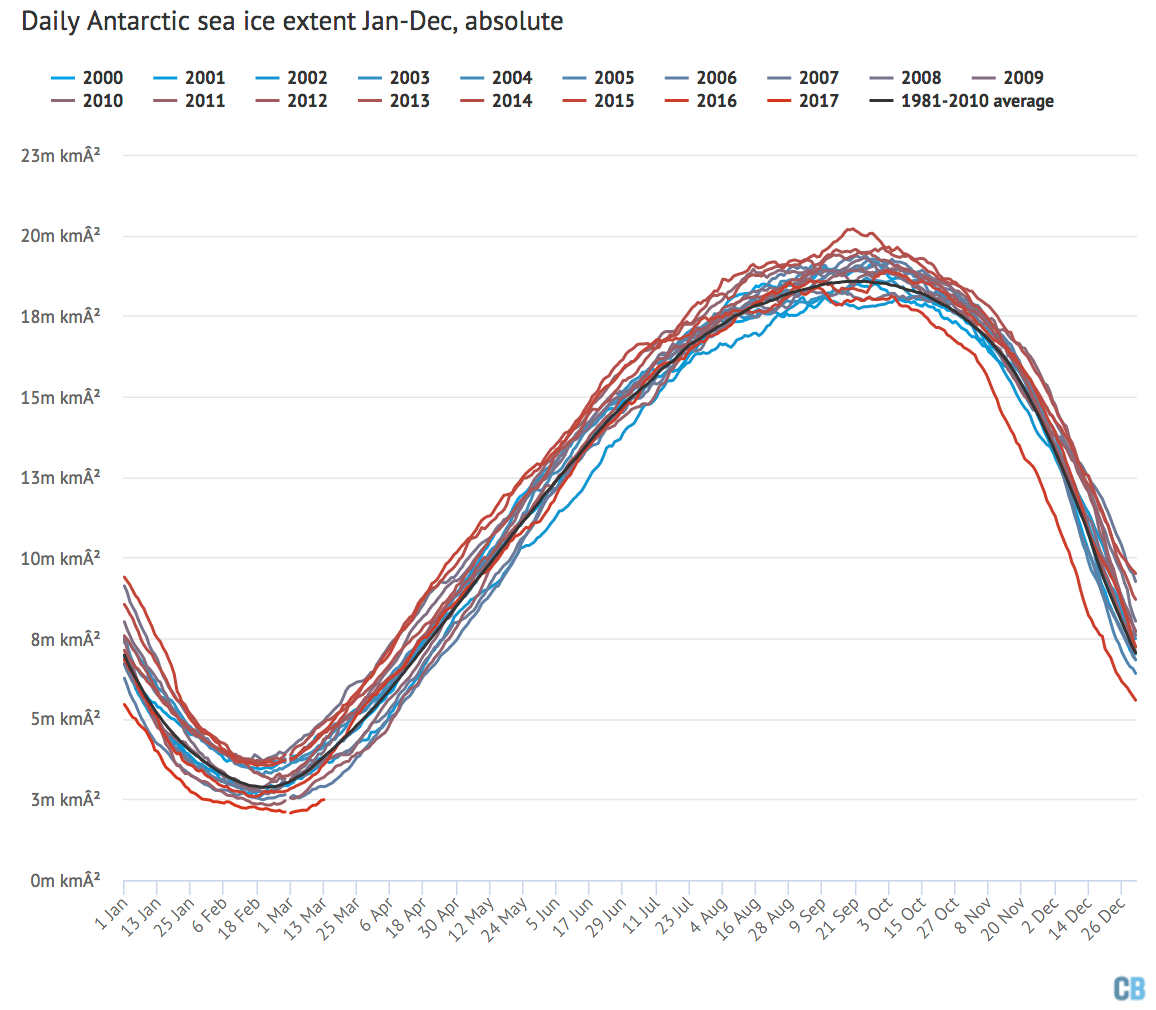 “Just a few years ago the Antarctic sea ice extent was breaking records as being relatively high, but this year it has shown record-breaking lows for several months.”

The Antarctic’s “exceptional year” in 2017 could even be a hangover from the powerful El Niño the world recently experienced, said Brandon:

“A pattern of air pressure that determines the wind circulation in the high southern latitudes called the Southern Annular Mode switched from positive to negative in late 2016 and this may be linked to the large El Nino of 2014-16.”

This switch made the ice “more mobile and likely led to the relatively early Antarctic spring,” explained Brandon. 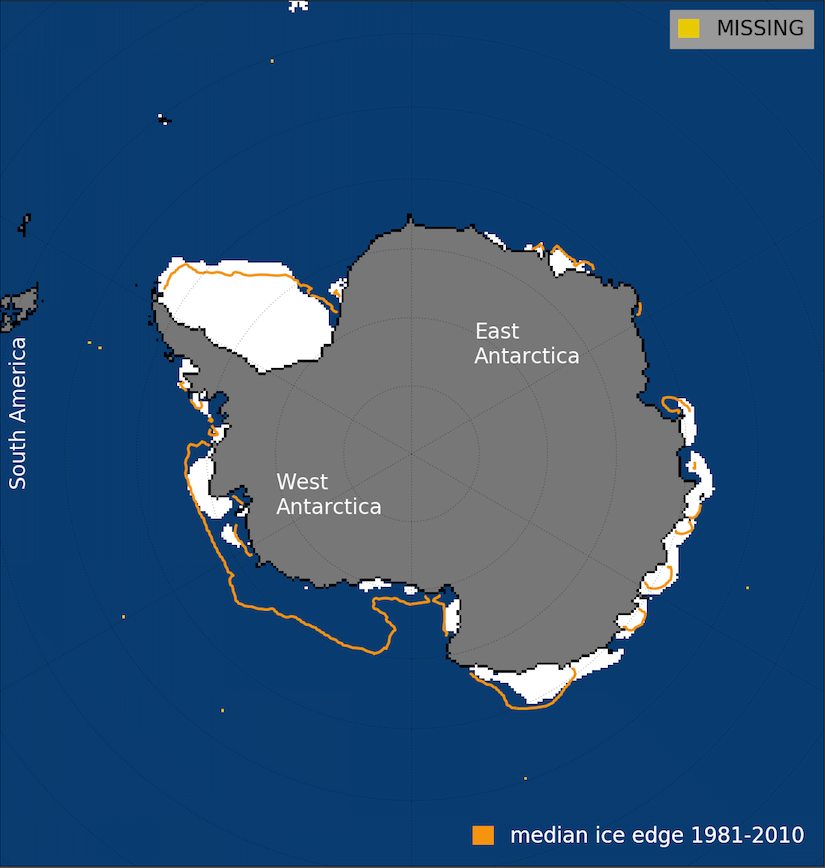 Having passed the summer minimum, sea ice has started growing again. But scientists will be keeping a close eye in coming months to see how the ice fares over the winter freeze up season, explained Prof. John Turner, a climatologist at the British Antarctic Survey. He told Carbon Brief:

“The rate of recovery after March 1 has been a little slow, but not too far off what we see normally. It’s just that the amount of ice is about 400,000 square kilometers less than the previous minimum.”

Such low ice cover at this time of year is unusual for recent times. Satellites have, in fact, measured a slight increase in Antarctic sea ice over the past 20 years or so, despite rising global temperature. You can see this in the graph below from NSIDC.

A number of factors could be behind this somewhat counterintuitive trend, said Dr. Jonathan Day, an expert in sea-ice prediction at the University of Reading. He told Carbon Brief:

“[The upward trend in Antarctic sea ice] could be a response to human-caused climate changes, such as ozone depletion or freshening of the ocean surface due to melting of land ice, both of which may cause the ice cover to expand.”

Evidence also suggests a change in winds driven by a natural cycle in the tropical Pacific Ocean could be behind recent Antarctic sea ice growth, said Day. Prof. Jerry Meehl, a scientist from the National Center for Atmospheric Research and lead author on that research, told Carbon Brief:

“The connection from the tropical Pacific to the Antarctic involves a chain reaction of linked physical processes that ends up with the winds around Antarctica affecting sea ice extent.”

If natural variability has been masking the signal of human-caused climate change in the Antarctic over the satellite period, this pattern will reverse at some stage. In fact, it may already have, said Meehl. He told Carbon Brief there is evidence the Pacific cycle “switched” in 2015, which could mean we’re seeing the start of a declining trend in Antarctic sea ice.

But the message from scientists is that while Antarctic sea ice appears to be bucking the trend this year, they need more than a single year before they can tell if a long-term change is afoot.

Overall, it has been an exceptional year for the world’s ice cover. While Antarctic sea ice has thrown up a few interesting questions for polar scientists, record low levels in the Arctic for this time of year continues the persistent downward trend that characterizes the last three decades.