These Sculptures Help Heal the Planet 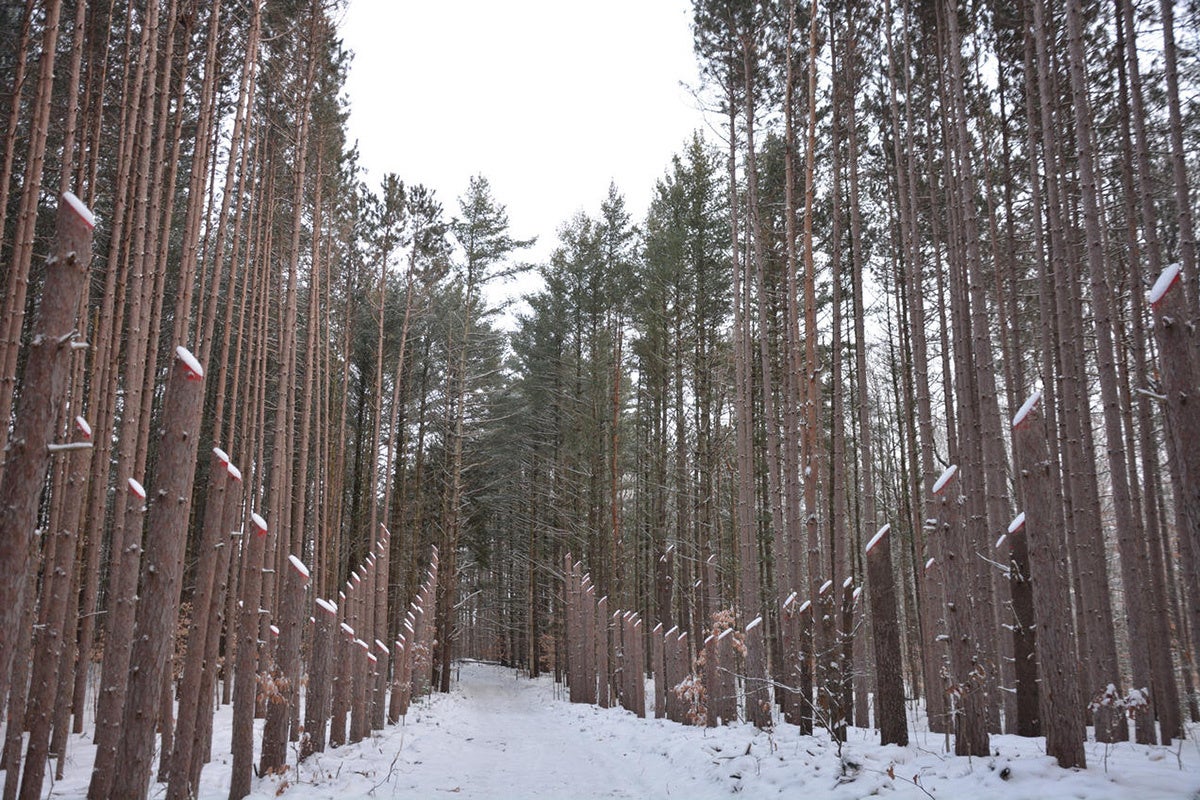 Sky Opening, a new sculpture embedded in the woods of northern Michigan, is as stark and dramatic as its name sounds. A visitor approaching from an old logging road that leads through pine trees as tall and straight as telephone poles is suddenly confronted by a stab of light and air that slices through the dark shade of the forest. Rising from the ground in a narrow clearing are dozens of tree trunks. They range in height from just about eye level to 90 feet tall, all sliced at an angle and bloodied with the red flagging paint used by loggers. Together, these 150 trees form a ceremonial entry that swoops toward the ground and then rises back up to the treetops and the welcoming sky.

Like all the sculptures by Bay Area artists Mary O’Brien and Daniel McCormick, Sky Opening is a visually arresting act of environmental remediation. “We’ve been involved in environmental restoration long enough to know that the science and engineering can be brutal,” said O’Brien. “Our belief is that it doesn’t have to look brutal.” 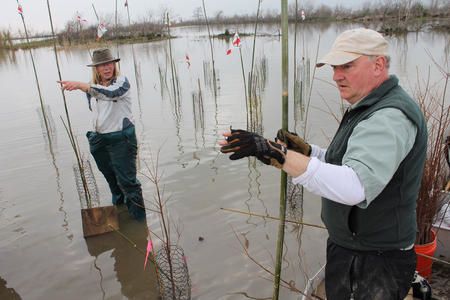 McCormick, who studied with James Turrell (an icon of the Land Art movement), and O’Brien, a University of California, Berkeley–trained sculptor, are deeply committed to conservation. Their large-scale sculptures are often made of organic materials that will blend into their surroundings over time. In landscapes ranging from Nevada’s desert riverbeds to Louisiana’s flooded marshes, their sculptures buttress riverbanks and shelter wetlands from erosion with wattles of cottonwood that do double duty as nesting sites for migratory birds.

The duo’s grand entrance into the boreal forest in northern Michigan is the first step in the planned clearing and replanting of 10 wooded acres owned by the Interlochen Academy of Arts. This forest was once a mix of conifers and hardwood trees such as maple and ash and home to birds like the Kirtland’s warbler, one of North America’s rarest species. Not anymore. The industrial farming of nonnative trees, such as Scotch pine, has robbed the land of sunlight, water and windborne seeds needed for a diversity of plant and animal life. The dry soil under the thick mattress of pine needles doesn’t support new growth. The only remedy now is to gradually rid the land of the pines and allow a mix of native species to return.

Sky Opening starts the process with an artistic statement. “That is the whole point of this piece,” said Interlochen’s director for visual arts, Mindy Ronayne, who was instrumental in bringing O’Brien and McCormick to the school’s campus. “A clearcut is painful to see, but Dan and Mary make you look up at the height of the tress and the sun. They make you realize how bright the sun is compared to the deep shade of the forest, and to wonder how that has happened here.”

In the bayous of Louisiana, where the land is slipping into the sea at a rate of a football field an hour, bald cypress trees act as buffers against storm surges and sea-level rise. Here, the artists collaborated with oil and gas industry workers, boat captains, hunters and fishermen to help defend the trees from damage by boats and nutrias, invasive rodents with a voracious appetite for cypress saplings. Repurposed crab cages protect the young trees from being eaten by nutrias, while tall poles of native river cane topped with colorful pennants alert boaters to the vulnerable saplings’ presence in shallow flooded fields, some of which were former cow pastures. 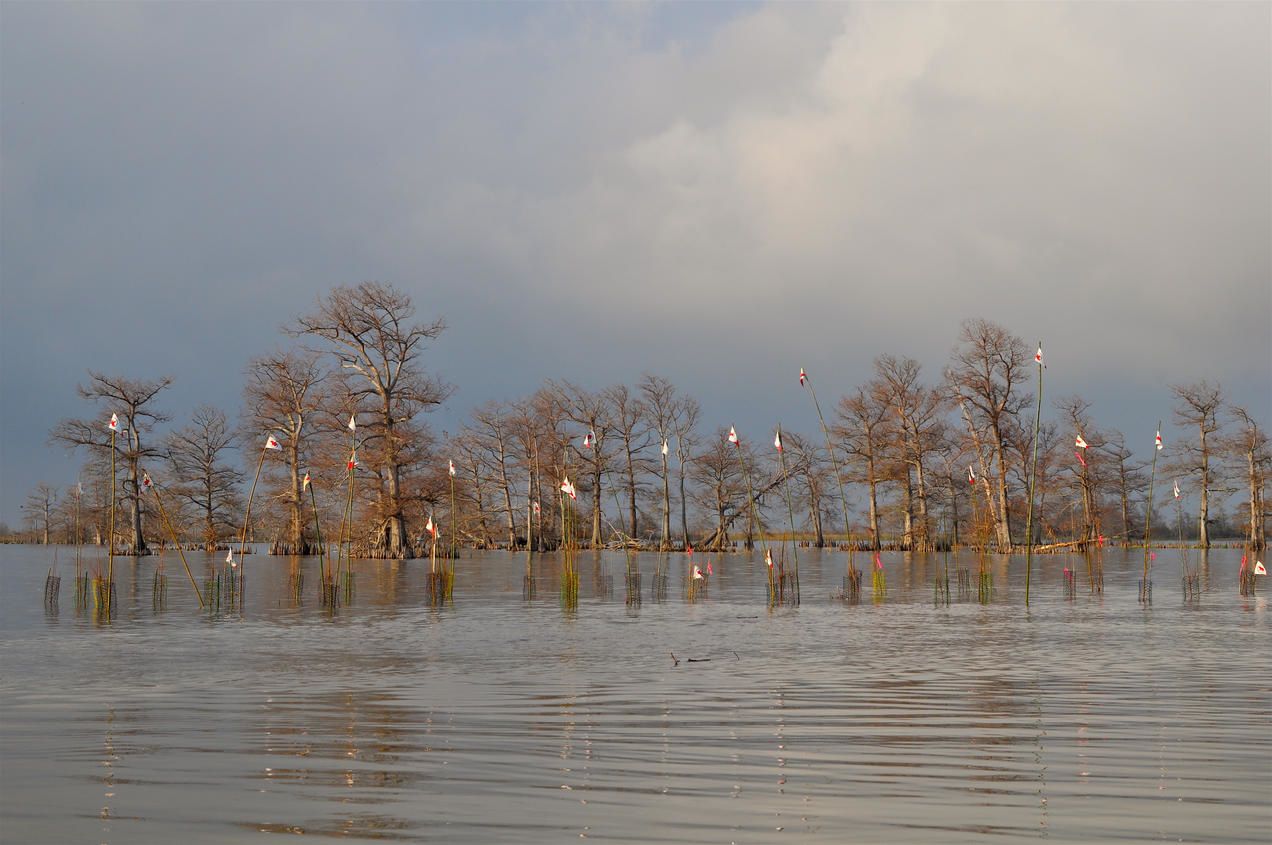 “We have about 50 trees still there, now strong enough to withstand the nutrias,” said O’Brien. “It’s just a small version of what’s needed down there, where the state is saying to plant trees like crazy. A drop in the bucket. But we have the community involved.”

The sculptures take time to do their jobs, and community buy-in is important. William Fox, a curator at the Nevada Museum of Art in Reno, knows O’Brien and McCormick from their work on five sculptures set in Nevada riverbeds. As Fox puts it, “Art is how you build that culture of caring for place. It takes people knowing the place and telling stories about it. It means having a connection. And Mary and Dan bring people to those places.” 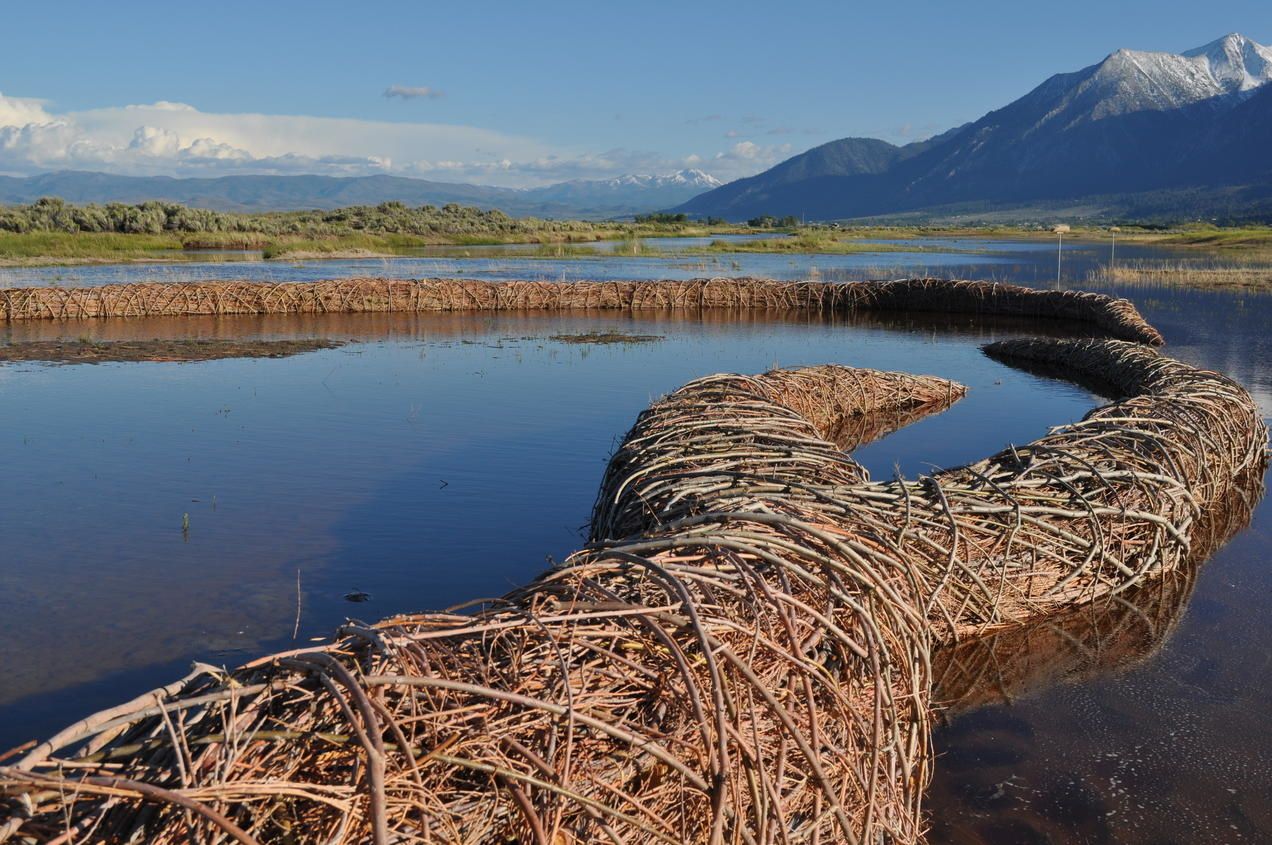 In the end, that matters more to the artists than making a permanent mark on the landscape. O’Brien said others in the art world don’t always understand what they’re doing and will ask how it feels to have their art disappear. “Our work isn’t a bronze in the museum, I tell them, but it doesn’t disappear. It kicks off the restoration cycle.” 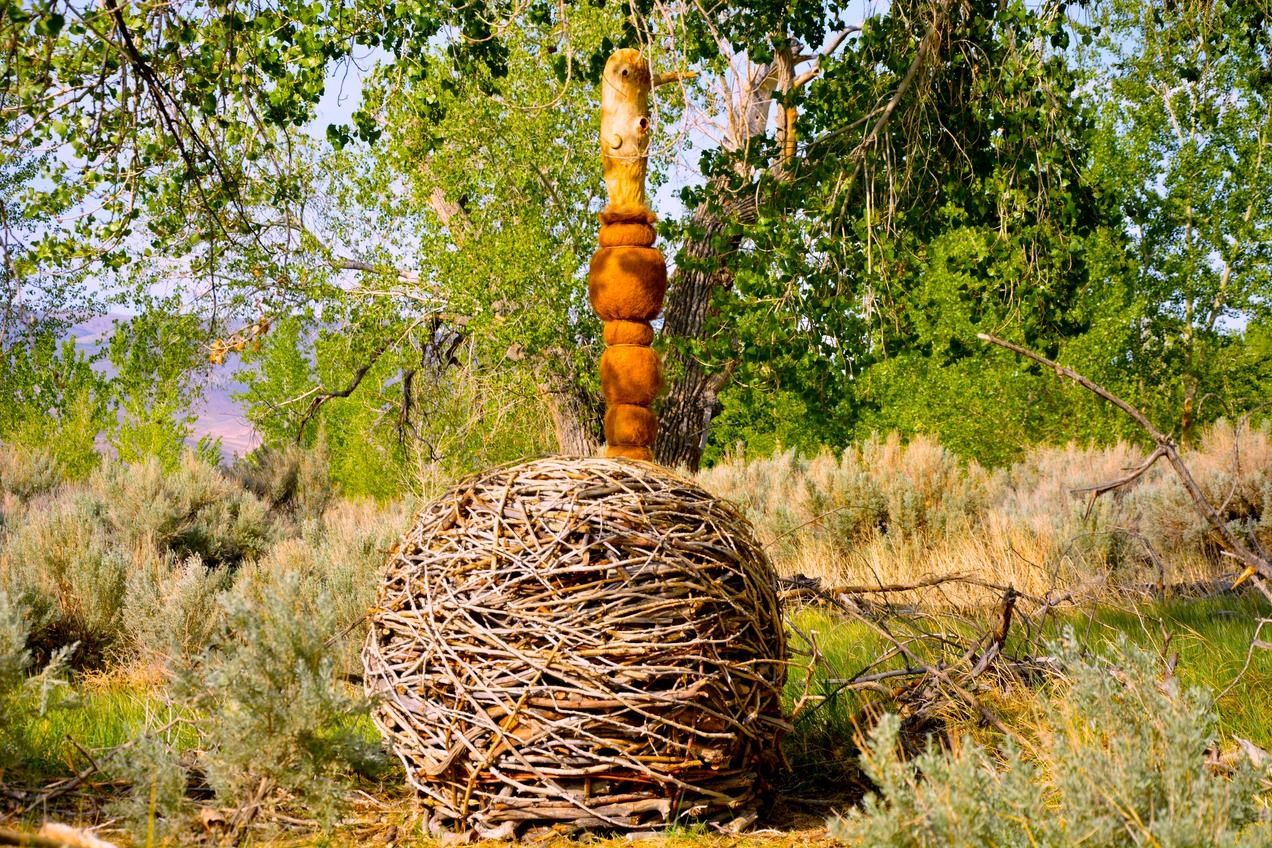