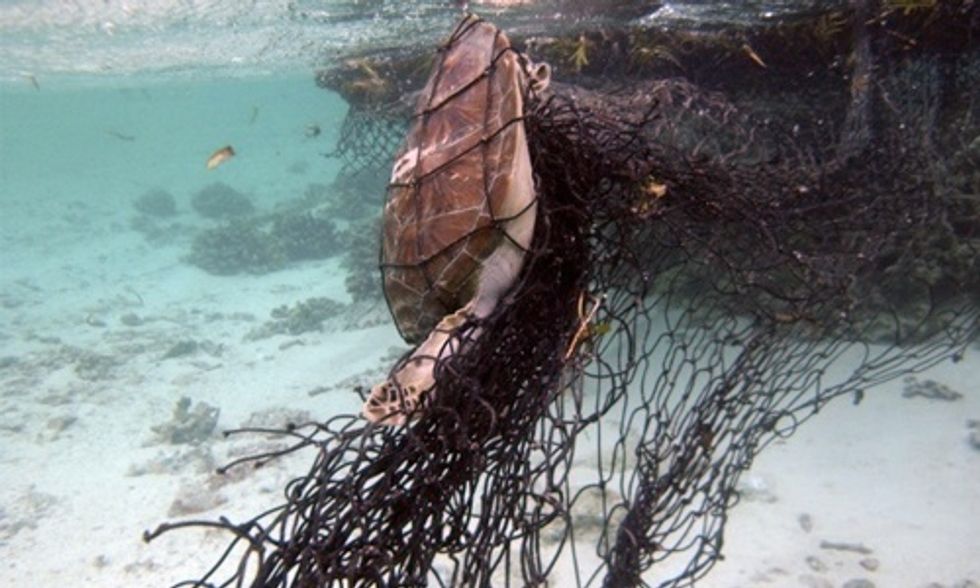 Many of us know about the staggering levels of ocean pollution, but not all of us have seen a giant sponge sliced through by fishing line or have tugged back armfuls of trash lurking deep underwater.

Now, through a striking photo campaign, Beneath The Waves, from the Project AWARE Foundation—a global community of scuba divers who are working toward trash-free oceans—we get to see how our oceans are treated like trash dumps up close and personal, and why action must be taken immediately.

For the past month, divers from around the world have been uploading photos of marine debris onto Twitter,  Instagram and Project AWARE's website to bring attention and urge for solutions to this transnational issue.

Why scuba divers? Well, few people know the scourge of ocean pollution better than they do.

"We're citizen scientists, educators, philanthropists and advocates. We're united together under a common passion, respect and desire to protect our ocean," Project AWARE said in a statement from the campaign.

"Divers see firsthand the devastating impact rubbish can cause on ocean wildlife," the foundation continued. "With more than 1 in 10 species affected by marine debris threatened with extinction, our actions to protect are more urgently needed than ever before."

In the photos below, divers share their unique and haunting view of underwater life affected by pollution. Some of the most devastating photos are of marine life such as whales, rays and crabs trapped in discarded fishing line, bottles and other debris.

The efforts from this 30-day campaign led to the second Our Ocean 2015 conference, which was held in Chile Oct. 5-6, in which topics such as illegal fishing, marine plastic pollution, ocean acidification and climate change were discussed. The first conference was held last June in Washington, DC, as an initiative of Secretary of State John Kerry.

You can see more photos of marine debris as well as upload your own at this link here. You can also participate on social media using the hashtag #BeneathTheWaves.