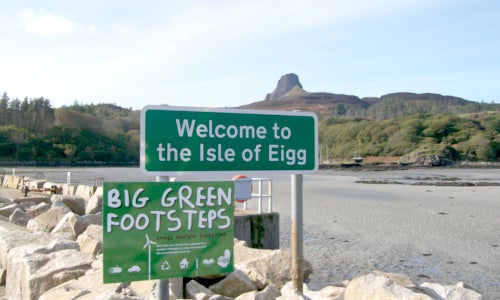 The people of Eigg Island are used to getting results when it comes to advancements in renewable energy.

The island with just 85 residents has transitioned from having no grid in 2008 to now making energy—mostly clean—available to everybody. In 1997, Eigg became the first island in Scottish history to be bought by its inhabitants, and now it dreams of being the first island in the world powered by renewable energy.

“It varies from year to year depending on weather conditions, but we are getting between 85 and 90 percent of our energy from renewables,” Maggie Fyffe, secretary of the Eigg Heritage Trust, told Al Jazeera.

“There are miles and miles of underground cable connecting every house to the grid.”

The island only receives tourist visits during certain parts of the year and is about 12 miles away from mainland Scotland. It’s independent from the United Kingdom’s national grid, which prevents the island from signing contracts with large companies to deploy renewable energy. Other small communities in Scotland have signed such contracts, guiding the nation to its 100-percent-renewable-energy goal by 2020.

The island’s renewable portfolio includes a 100 kilowatt (kW) hydro electric generator supported by two smaller generators; four 6-kW wind generators; and 30kW of solar cells. According to the island trust, the overall control of the power generation of the system relies on a bank of batteries connected to the distribution grid through a series of linked inverters. The inverters allow energy to flow from the batteries and the grid. They adjust depending upon the balance of demand and supply to maintain the charge of the batteries.

The system cost about $2.64 million and was funded by the European Union and a few national entities. Before 2008, most islanders relied generators that ran on diesel and polluted the atmosphere. They also had to be shipped from the mainland at large costs.

“It’s hard to imagine what it is like to live with no electricity or limited electricity,” said Fyffe, who moved to the island in the ’70s. “If you had a generator you would only have it on for a few hours a day, so that meant you only had electricity for certain hours of the day. Now, life is so much easier.

“I’ve got a washing machine—which I never had before.”