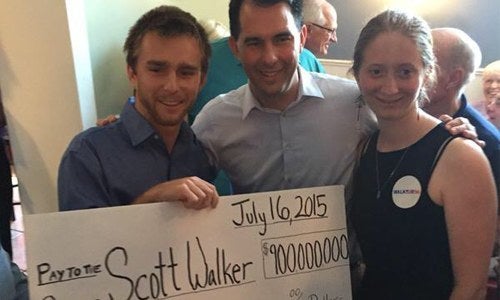 At a restaurant in New Hampshire yesterday, 23-year old Tyler McFarland played a trick on presidential hopeful and Wisconsin Gov. Scott Walker. McFarland approached Walker with a sign reading “Walker 4 President” and asked to take a photo with him. Walker obliged, but just before the photo was taken McFarland flipped his sign over to reveal the other side: a giant fake check made out to Walker by the Koch brothers.

Walker appeared not to notice the switcheroo, but after the pictures, McFarland made sure to let Walker in on the prank, saying “I’d like to present you with this check from the Koch brothers for climate denial.” Walker brushed the whole thing off and kept talking with voters.

McFarland, an organizer for the group 350 Action, told The Guardian he wanted to highlight the stark contrast between President Obama’s Clean Power Plan—released yesterday—and Walker’s views.

“President Obama’s plan should be called the ‘costly power plan’ because it will cost hard-working Americans jobs and raise their energy rates,” Walker said in a statement yesterday in response to the President’s announcement. “It will be like a buzz saw on the nation’s economy. I will stand up for American workers and stop the ‘costly powPreser plan.'”

Walker attended the Koch brothers’ donor conference this past weekend in California along with four other GOP presidential candidates. Jon Stewart and Donald Trump both criticized the candidates for looking like a bunch of Koch puppets.