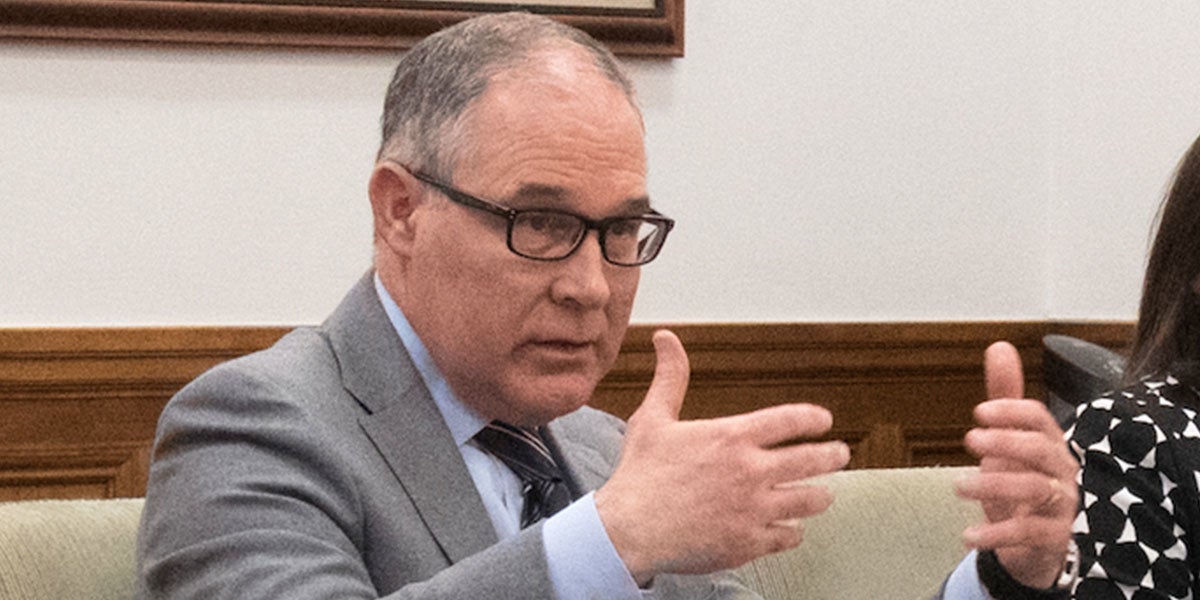 Scott Pruitt, the embattled head of the U.S. Environmental Protection Agency (EPA), tasked a taxpayer-funded agency staffer with securing a “business opportunity” for his wife with an executive of the fast-food chain Chick-fil-A, the Washington Post reported.

According to emails obtained by the Sierra Club under the Freedom of Information Act, Pruitt’s former scheduler, Sydney Hupp, contacted Chick-fil-A CEO Dan Cathy about setting up a meeting on behalf of Pruitt.

“The Administrator would like to talk about a potential business opportunity with Mr. Cathy. Nothing very pressing, just hoping to connect sometime in the next month or so,” Hupp wrote in the email. The exchange dates back to May 2017, just months after Pruitt took office.

The meeting never took place, the Post reported. However, the EPA boss eventually spoke with Chick-fil-A representatives. Carrie Kurlander, a Chick-fil-A spokeswoman, told the newspaper that the conversation was about Pruitt’s wife Marlyn opening a franchise. She started the franchise application but never completed it, Kurlander said.

“Scott Pruitt’s abuse of the public trust and his corrupt attempts to leverage his position for personal gain have reached a disgraceful new low,” said Sierra Club executive director Michael Brune in a statement. “This is the clearest example yet of Pruitt unethically and illegally seeking personal benefits because of the job
Donald Trump has entrusted him with.”

Brune added, “How much longer will Trump allow Pruitt to enrich himself at the taxpayer’s expense? This appears to be the only Administration in history that would allow this level of corruption to thrive, as any President with any sense of ethics or the law would fire Pruitt immediately.”

It's important to make one thing very clear about yet another Scott Pruitt scandal.

The fact that the waffle fries at @ChickfilA are delicious does not justify @EPAScottPruitt using taxpayer funded staff to help his wife get a job at Chick-fil-A. https://t.co/lwvhG8AscV

“We continue to have concerns and look into those, and we’ll address them,” she
said.

Pruitt, who is already facing about a dozen ethics investigations, allegedly assigned another political aide Millan Hupp, Sydney Hupp’s sister, with the task of obtaining a used mattress from the Trump International Hotel in Washington.

During a hearing with the Senate Appropriations subcommittee last month, Pruitt admitted Millan worked for free searching for a place for him to live in Washington, DC.

The leading Democrat on the subcommittee, New Mexico Senator Tom Udall, said the free labor constituted a gift. Federal officials are prohibited by law from receiving gifts of more than $10 from employees.

Among other scandals, the EPA chief has also been under fire for flying first class on the taxpayer’s tab and staying at a $50-a-night Capitol Hill condo owned by a coal lobbyist’s wife.