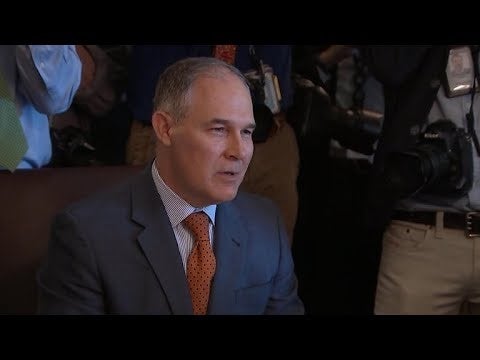 “Americans deserve an EPA Administrator more dedicated to first-class protection of human health and the environment than to luxury travel at taxpayer expense,” Energy and Commerce Democratic leaders wrote in a letter sent Tuesday to Pruitt.

“To date, your agency has failed to provide a clear explanation as to whether your travel since becoming administrator complies with all applicable federal regulations and Agency procedures,” they continued.

“It remains unclear how any possible security threats warranted the frequent issuance of waivers authorizing you to fly first-class on domestic flights, or how sitting in a first-class seat is safer than sitting in economy class.”

“Americans deserve an EPA Administrator more dedicated to first-class protection of human health and the environment than to luxury travel at taxpayer expense,” the E&C Democratic leaders demanded. pic.twitter.com/fRC7luOlfL

The Washington Post, citing records obtained by the Environmental Integrity Project, reported earlier this month that Pruitt’s use of taxpayer funds on first-class flights and luxury hotels exceeded previous administrators.

During a two-week stretch in June, the EPA head racked up at least $90,000 in taxpayer-funded travel. One of his short domestic trips from Washington, DC to New York was booked first class for $1,600—six times the amount spent on the two media aides who came along and sat in coach.

Pruitt was most recently spotted flying first class from the Washington metro area to Boston just a day after the Trump administration proposed cutting the EPA’s budget by more than 23 percent.

Federal regulations call for government employees to “consider the least expensive class of travel that meets their needs” but they can use first class for security or medical reasons.

An EPA spokesman initially explained that Pruitt has a “blanket waiver to fly in first or business class” due to unspecified security concerns.

But the agency later backtracked that statement after criticism from lawmakers on both sides of the aisle. Even Chesley “Sully” Sullenberger III, the retired pilot who famously landed a plane in the Hudson River and now serves as a safety and aviation expert, commented that “first-class is not safer than economy.”

An EPA spokesman now insists that Pruitt submits a waiver to fly in either first or business class for each trip.

Pruitt, who notoriously travels around with a 24/7 security detail, explained to the New Hampshire Union Leader that his security team dictates his travel options.

“We live in a very toxic environment politically, particularly around issues of the environment,” Pruitt told the publication.

“We’ve reached the point where there’s not much civility in the marketplace and it’s created, you know, it’s created some issues and the [security] detail, the level of protection is determined by the level of threat.”

Still, the Democrats are requesting documents and answers to a series of questions, including:

Despite the travel scandal, it appears that President Trump still has confidence in his EPA director, as The Hill reported.

“I have no reason to believe otherwise,” White House press secretary Sarah Huckabee Sanders told reporters Tuesday when a reporter asked if the president still has confidence in Pruitt and VA Secretary David Shulkin who also reportedly flew to Europe last year on the taxpayer dime.

“As we have said many times before, if somebody doesn’t have the confidence of the president, you will know,” she added.