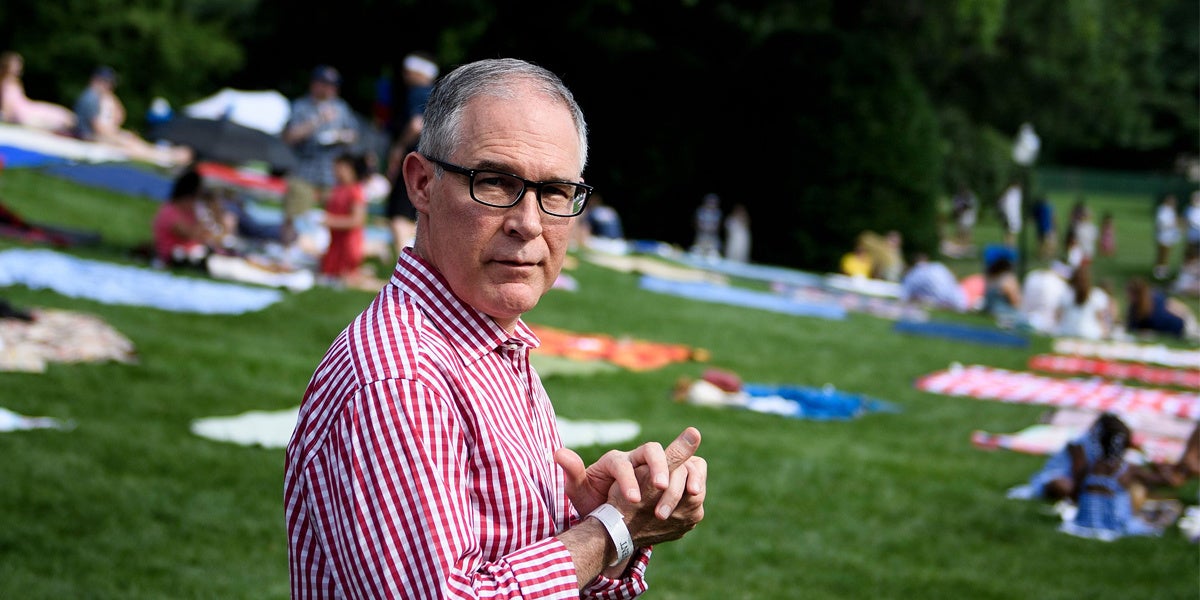 When Environmental Protection Agency (EPA) head Scott Pruitt resigned his position Thursday, he explained in a letter to President Donald Trump that he was stepping down because “the unrelenting attacks on [him] personally, [and his] family, are unprecedented and have taken a sizeable toll on all of [them].”

What he didn’t mention was that he is also subject to more than a dozen federal ethics investigations, due to an “unprecedented” list of scandals that came to light during his nearly 17 months in office. All investigations will continue despite his departure, The New York Times reported Thursday.

No one knows which, if any, of these scandals finally persuaded Pruitt to call it quits, but, as America bids Pruitt goodbye, here is a look back at 10 of his most corrupt actions.

1. He Cost the EPA Millions For Security: In October 2017, Pruitt already had a security team three times the size of his predecessors’ when he upped it from 18 to 30 bodyguards. At the time, it was estimated this would cost the EPA $2 million a year just for salaries. The total cost, including travel, was closer to $3 million, The Huffington Post reported. Perhaps the EPA’s strangest security expenditure during Pruitt’s tenure was the $2,749.62 spent on “tactical polos” and “tactical pants,” which The Intercept uncovered last month.

2. He Spent $90,000 in Tax Dollars on Travel in Just Two Weeks: Pruitt had a “blanket waiver” to fly first class on the taxpayer dime until he started flying coach this year. Almost a year ago, the Environmental Integrity Project revealed that Pruitt had charged taxpayers $12,000 for frequent flights back to his home state of Oklahoma in the spring of 2017. Then, in one particularly egregious example, he and his aides spent at least $90,000 on first class or military flights during just two weeks of June 2017 while traveling to promote the president’s agenda.

3. He Wasted Taxpayer Money on Bizarre Office Luxuries: Reports first surfaced in September 2017 that Pruitt would spend $25,000 to install a soundproof phone booth in his office. That booth ended up costing $43,000, and it wasn’t the only strange item he bought himself on the taxpayer’s dime. Those included biometric office locks for $5,700, fountain pens for $1,500 and fancy journals for $16,000, according to The Huffington Post.

4. He Hired A Conservative Attack Group to Help with Media Coverage: In December of 2017, news broke that Pruitt’s EPA had hired Definers Public Affairs, a group linked with campaigns to stalk and harass environmental activists and journalists, to help the EPA craft its media coverage. The $120,000 no-bid contract was canceled after the story broke, The Huffington Post reported.

5. He Rented a Condo from an Energy Lobbyist’s Wife: In the scandal that many thought would be his last, Pruitt rented a DC condo at the below-market-rate of $50 a night from the wife of energy lobbyist J. Steven Hart. At the time, Pruitt and Hart insisted there was nothing unethical about the arrangement, but emails obtained by the Sierra Club showed that Hart did lobby the EPA during and after Pruitt’s stay in the family digs.

6. He Penalized Staffers who Spoke Out: The New York Times reported in April that Pruitt demoted or reassigned at least five staffers who had questioned him on decisions ranging from his desire for a $70,000 desk upgrade or his policy of using sirens and flashing lights when late for dinner in DC.

7. He Asked his Staff to Go Far Above and Beyond: In a Senate hearing in May, Pruitt admitted that one of his employees had worked for free trying to find him a place to live when he first arrived in DC, something Democratic Senators said broke the law, since free labor constitutes a gift and federal officials are not allowed to receive gifts of over $10 from employees. Pruitt also sent staffers on snack runs and asked them track down an old mattress from the Trump International Hotel in DC, according to The Huffington Post. Last week, employees came forward saying he would ask them to put hotel reservations on their personal credit cards, failing to pay them back in at least one instance, The Washington Post reported.

8. He Used His Position to Help His Wife’s Career: In another example of making inappropriate demands of staff, he asked his scheduler to set up a meeting with Chick-fil-A CEO Dan Cathy about acquiring a restaurant franchise for his wife. The meeting never ended up taking place, but Pruitt also asked senior EPA administrator Samantha Dravis to find his wife a job that paid at least $200,000 a year, The Guardian reported.

9. He Hobnobbed with the Industries He Was in Charge of Regulating: In June, The New York Times reported that Pruitt had attended a University of Kentucky basketball game in front-and-center seats belonging to coal billionaire Joseph W. Craft III, with whom Pruitt had met at least seven times during his first 14 months at the EPA. There are also ongoing federal investigations into Pruitt’s meeting with the National Mining Association and his appearance in a National Cattlemen’s Beef Association video, The New York Times reported.

10. He Knew He Was Doing Wrong: Two days before Pruitt’s resignation, CNN reported that an EPA whistleblower said that Pruitt and his aides kept a secret calendar for possibly controversial meetings with industry officials and others, a practice that would violate federal laws against “falsifying” or hiding public records. Two Democratic congresspeople had called on the EPA inspector general to investigate the claim the same day that Pruitt tendered his resignation, CNN further reported.