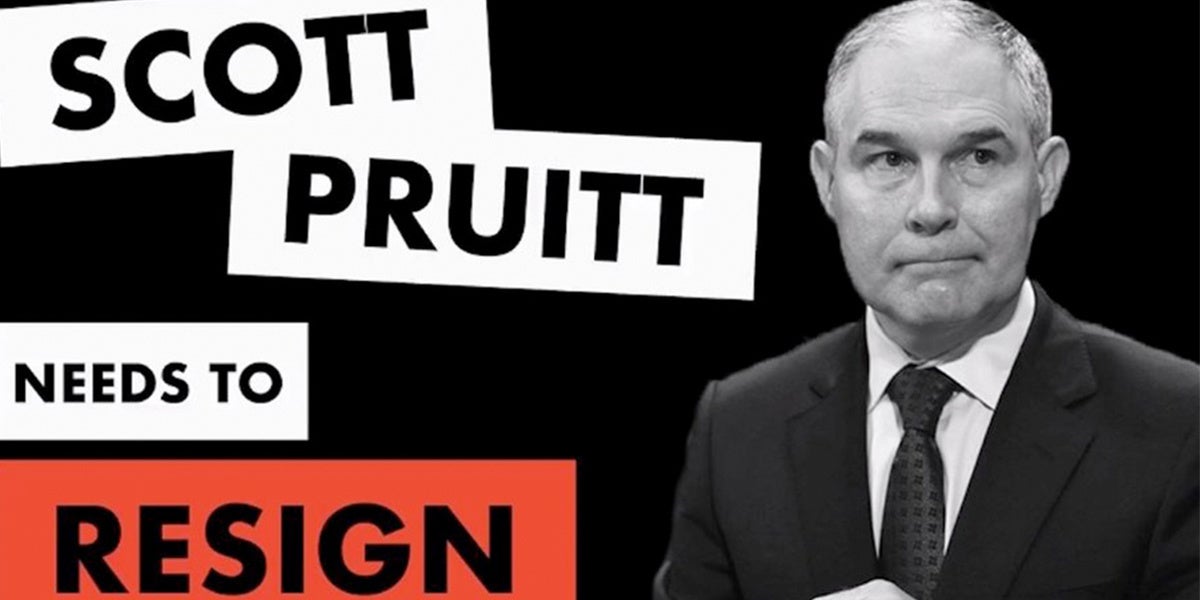 'Pruitt is administrator of the EPA but he's behaving like the emperor of the swamp. His imperial tenure needs to end.' Senator Tom Udall / Twitter

A group of 39 senators and 131 representatives signed a
resolution calling for the “immediate resignation” of Scott Pruitt, the scandal-plagued U.S. Environmental Protection Agency (EPA) administrator.

The document represents a record number of senators to formally demand a cabinet official to step down.

The resolution comes in the wake of Pruitt’s growing list of controversies: his request for a
$43,000 sound-proof phone booth violated federal law; his $50-a-night stay at a Capitol Hill condo owned by the wife of an energy lobbyist; his questionable use of taxpayer money for first-class and charter flights, as well as a ’round-the-clock security detail; and reports that he gave large pay raises to his closest aides.

That’s not to mention Pruitt’s continued efforts to dismantle the legacy of the very agency he heads.

Per the resolution, “The Agency is hemorrhaging staff and experts needed to protect the health, safety, and livelihood of millions of people of the United States, with more than 700 employees of the Agency having left or been forced out of the Agency during his tenure as Administrator.”

“By delaying the effective date of regulations, easing enforcement of existing regulations, and delaying implementation of new regulations, Administrator Pruitt is helping polluters at the expense of the health, safety, and livelihood of millions of people of the United States,” it adds.

No Republicans added their name to the document, even though Republican Reps. Elise Stefanik (NY), Carlos Curbelo (FL) and Illeana Ros-Lehtinen (FL.) have previously called for Pruitt’s resignation or firing.

“During his time in office, Pruitt has waged all-out war on the bedrock protections that keep our air and water clean, prevent toxic chemicals from contaminating our communities, and safeguard the health of our kids and families,” Udall said. “He has done lasting damage to public health and safety—gutting the EPA’s core mission—all to benefit his campaign donors and grease the wheels for his big polluter friends.”

It’s not just politicians who are calling for Pruitt’s ouster. More than 30 environmental and civil rights organizations, including the NAACP, the Sierra Club and Friends of the Earth, took out full-page newspaper ads on Wednesday in The New York Times, the New York Post and Pruitt’s home-state paper, The Oklahoman, The Hill reported.

Scott Pruitt, maybe this is finally enough publicity for you?
We’re calling for your resignation in the @nytimes, the @nypost, and @TheOklahoman pic.twitter.com/OPSmvPvCGj

Trump is
reportedly fond of his EPA chief, even though John F. Kelly, the White House chief of staff, has urged the president to let Pruitt go.

“No one other than the president has the authority to hire and fire,” White House press secretary Sarah Huckabee Sanders said earlier this month. “The president feels that the administrator has done a good job at EPA.”

She said the White House is conducting an internal investigation into Pruitt’s conduct.