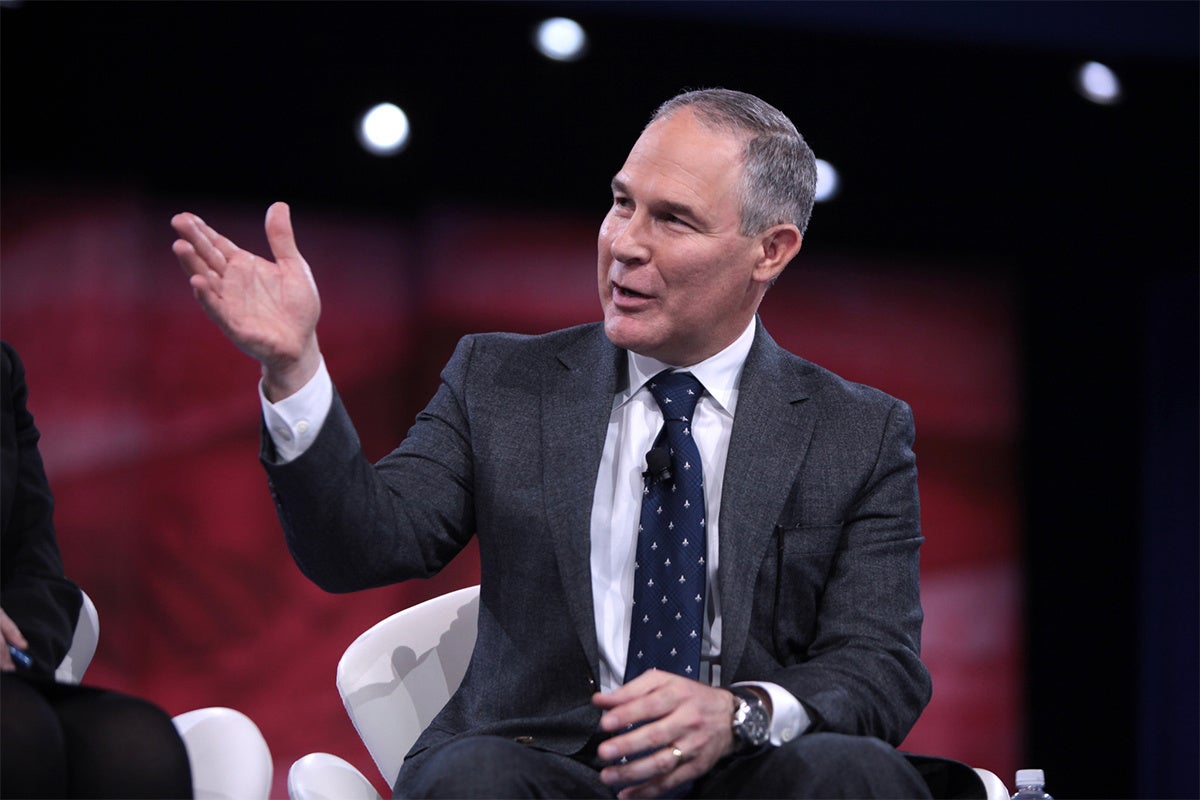 Scott Pruitt, the administrator of the U.S. Environmental Protection Agency (EPA), has a “blanket waiver” to take taxpayer-funded first-class flights due to unspecified security reasons.

“Due to security concerns he has a blanket waiver to fly in first or business class,” an EPA spokesman told
CBS News. When he travels, the agency follows “the recommendations of security personnel.”

The
Washington Post reported earlier this week that during a two-week stretch in June, President Trump‘s EPA head racked up at least $90,000 in taxpayer-funded travel. One of Pruitt’s short domestic trips from Washington, DC to New York was booked first class for $1,600—six times the amount spent on the two media aides who came along and sat in coach.

Pruitt regularly flies first class and brings his
infamous 24/7 security detail along with him. While the costs of their travel have not been made available, their salaries alone cost at least $2 million per year. No other administrator has needed ’round-the-clock security but Pruitt has reportedly received more death threats than any other EPA chief.

Federal regulations call for government travelers to “consider the least expensive class of travel that meets their needs” but can use first class for security or medical reasons.

Meanwhile, President Trump’s
latest budget proposal would slash EPA funding to its lowest level since 1990. As House Democrats noted in a tweet, “The Trump administration wants to cut EPA’s budget by 34 percent, including cuts to climate change initiatives and the Office of Science and Technology. But first-class flights apparently are a ‘core activity’ for Scott Pruitt.”

The Trump administration wants to cut @EPA’s budget by 34%, including cuts to #ClimateChange initiatives and the Office of Science and Technology. But first-class flights apparently are a “core activity” for @EPAScottPruitt. https://t.co/OJ8QcEpdY4

“I’m sure there’s some situations in terms of security where an upgrade may be appropriate,” Kennedy told CBS News. “But I think as a general rule, except for the president and the VP or if you’re paying for it yourself, you ought to fly coach.”

Pruitt confirmed to the
New Hampshire Union Leader that he flew first class from the Washington metro area to Boston to reach New Hampshire on Tuesday.

He explained that the waivers for the more expensive flights were the result of security concerns.

“Unfortunately … we’ve had some incidents on travel dating back to when I first started serving in the March-April timeframe,” he told the newspaper.

“We live in a very toxic environment politically, particularly around issues of the environment,” Pruitt continued. “We’ve reached the point where there’s not much civility in the marketplace and it’s created, you know, it’s created some issues and the (security) detail, the level of protection is determined by the level of threat.”

“I’m not involved in any of those decisions” to fly first class, he said. “Those are all made by the (security) detail.”