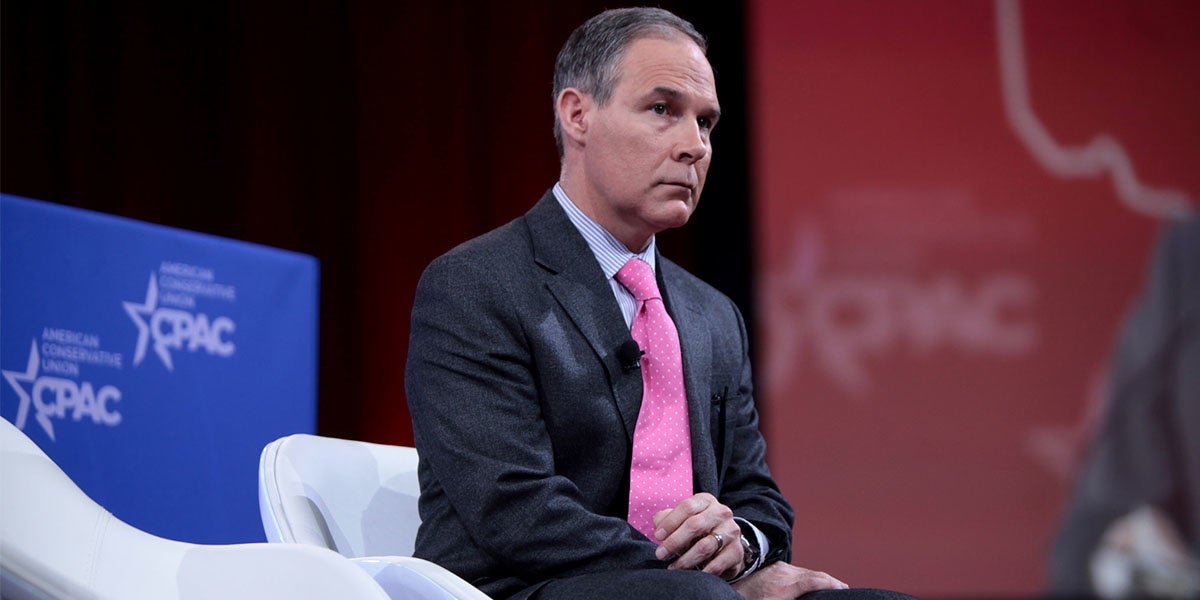 As U.S. Environmental Protection Agency (EPA) chief and reigning number one seed in the “worst Trump cabinet member” bracket Scott Pruitt attempts to beat back accusations that he violated ethics rules by renting a room from the wife of powerful energy lobbyist J. Steven Hart, the New York Times revealed late Monday that Pruitt approved a massive pipeline project supported by Hart’s firm at the same time he had access to what critics argue was an unusually low-priced rental.

“A giant pipeline that rips up a vast swath of America and wrecks the climate in exchange for a cheap condo,” 350.org founder Bill McKibben tweeted in response to the new report. “Seems the perfect emblem of the Trump years.”

While EPA officials immediately pushed back against the notion that Pruitt approved the project as a favor in exchange for the cheap condo, government ethics experts argued that the pipeline approval at the very least gives off the appearance of a conflict of interest.

“Entering into this arrangement causes a reasonable person to question the integrity of the EPA decision,” Don Fox, who served as general counsel of the Office of Government Ethics during the Obama and George W. Bush administrations, told the Times.

During an appearance on MSNBC on Monday, former White House ethics official and vice-chairman at Citizens for Ethics and Responsibility in Washington Richard Painter called Pruitt’s room rental “disgusting” and argued it is a clear “violation of the gift rule.”

Pruitt’s decision to sign off on the project—an expansion of Enbridge’s Alberta Clipper pipeline, which runs from Alberta, Canada to Wisconsin—came in March of last year, when his lease with the Washington, DC condo was still in effect.

“The signoff by the EPA came even though the agency, at the end of the Obama administration, had moved to fine Enbridge $61 million in connection with a 2010 pipeline episode that sent hundreds of thousands of gallons of crude oil into the Kalamazoo River in Michigan and other waterways,” the Times reported. “The fine was the second-largest in the history of the Clean Water Act, behind the penalty imposed after the Deepwater Horizon spill in the Gulf of Mexico.”

In response to the new revelations, government watchdogs immediately demanded a probe into the project’s approval process.

The Times report comes as Pruitt is currently under investigation by the White House over what critics have denounced as a “sweetheart” living arrangement. Pruitt, like other members of President Donald Trump’s cabinet, has also come under fire for his expensive first-class flying habits.

According to a Politico report late Monday, White House chief of staff John Kelly has floated the possibility of firing Pruitt in the coming months.

One possible reason Kelly hasn’t followed through, some White House officials and lobbyists told Politico, is because Pruitt has been extremely effective in carrying out Trump’s aggressive anti-environment agenda.

“I think he’s an A student … He’s always working. He’s always focused on the agenda. He’s always trying to figure out ways to make the boss look good,” energy lobbyist Mike McKenna said in an interview with Politico on Monday.

An example of Pruitt’s dedication to dismantling even the most basic planetary protections came Monday afternoon, when the EPA chief officially announced that he is rolling back Obama-era fuel efficiency standards.

“This is what happens when you put an oil industry shill in charge of the Environmental Protection Agency,” CREDO Action co-director Josh Nelson said in a statement on Monday. “No one should be surprised that Scott Pruitt, who literally rented his condo from an energy industry lobbyist, habitually puts corporate polluters ahead of the American people.”