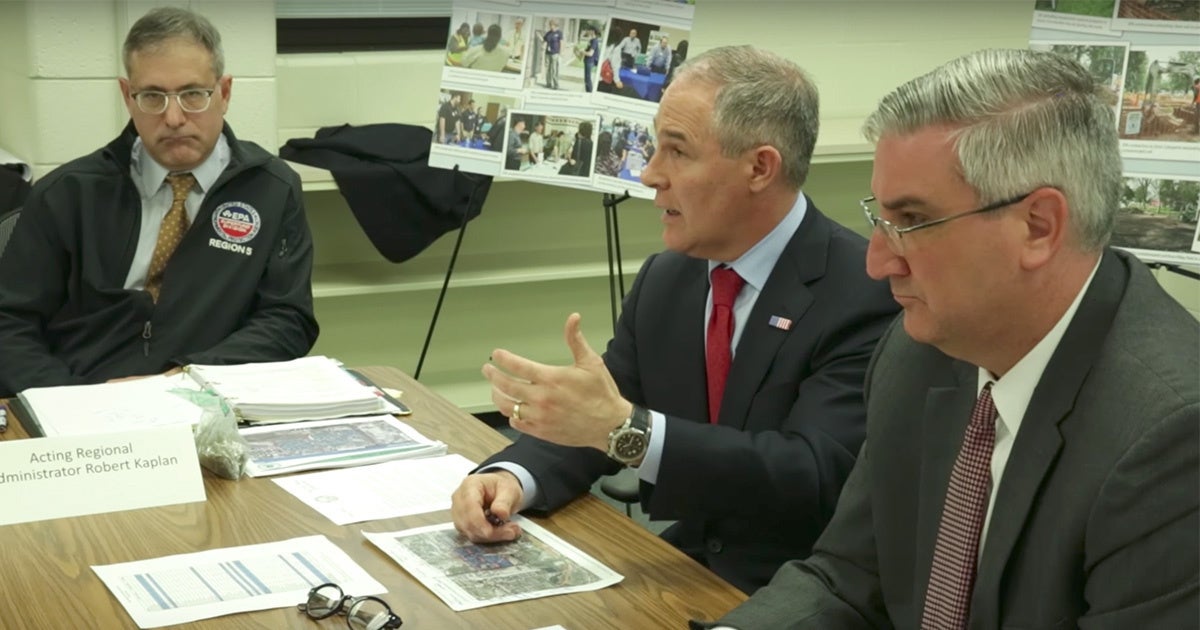 U.S. Environmental Protection Agency (
EPA) Administrator Scott Pruitt doesn’t hide his contempt for how the agency has been run, but does profess to care about one of its key programs: Superfund, which oversees the cleanup of the nation’s worst toxic-waste sites. In April, he toured a site in East Chicago, Indiana, contaminated with lead and arsenic, and told residents, “We are going to get this right.”

The following month, Pruitt—Oklahoma’s attorney general before he joined the EPA—tapped one of his former donors, banker Albert “Kell” Kelly, to find ways to accelerate and improve Superfund cleanups. Kelly started by consulting career staff members —often-knowledgeable officials who work at the agency regardless of who holds the White House. But then Kelly closed off the process, conferring with Pruitt to produce a final plan that altered or excluded many of the staffers’ suggestions. Gone, for example, was the idea that EPA officials be identified early on to lead discussions with communities on how contaminated land should be used after cleanup.

“We’re missing a huge opportunity to do something new and different with Superfund,” said one of two EPA employees who described the process to the Center for Public Integrity on the condition of anonymity.

What happened with Superfund is hardly an anomaly. Today’s EPA is wracked with internal conflict and industry influence, and is struggling to fulfill its mission, according to more than two dozen current and former agency employees. A few dozen political appointees brought in under the
Trump administration are driving policy. At least 16 of the 45 appointees worked for industries such as oil, coal and chemicals. Four of these people—and another 21—worked for, or donated to, politicians who have questioned established climate science, such as Pruitt and Sen. James Inhofe (R-Okla).

Career staff members—lawyers, scientists, analysts—are largely being frozen out of decision-making, current and former agency employees said. These staffers rarely get face time with Pruitt and frequently receive top-down orders from political appointees with little room for debate. They must sometimes force their way into conversations about subjects in which they have expertise.

And that is a big mistake, said one of Pruitt’s predecessors.

Career employees are “very dedicated to protecting human health and the environment, and they will change their ways of how they do that if they’re convinced you really want to accomplish that aim,” said Christine Todd Whitman, EPA administrator under President George W. Bush.

One such employee agreed. “I think it’s the fact that we’re not following regular procedures, we’re not sure of what the legal justification is for some of the things they’re asking us to do. We’re just kind of being told, ‘Do the opposite thing you did 18 months ago.’ That’s hard to swallow.”

The EPA staffers who spoke to the Center for Public Integrity said the isolation of Pruitt’s top staff from the rest of the agency limits the perspectives the administrator is exposed to before making decisions. Two appointment calendars, covering a six-month period beginning in March, show that Pruitt
hears overwhelmingly from industry. He was scheduled to meet 154 times during the period with officials from companies such as ExxonMobil and trade associations such as the American Petroleum Institute, the oil industry’s biggest lobby group. API was among at least 17 donors to Pruitt when he ran for state or federal office or led the Republican Attorneys General Association that have met with him as EPA administrator. Those same calendars indicate he saw only three groups representing environmental or public-health interests, though an EPA press release says he met with two others.

EPA spokeswoman Liz Bowman disputed claims that the roughly 15,000-person agency is riven with discord. Career employees are “vital” to the EPA’s work and meet regularly with political appointees and the administrator, she said, citing ongoing deliberations on a
water-pollution rule as an example. (Two career employees who spoke to the Center at Bowman’s request confirmed that they routinely work with political appointees and did so on the water rule.)

“We talk to people throughout the regions, the states, the career staff and a variety of different perspectives prior to making decisions,” Bowman said, adding in an email that “we follow the Administrative Procedure Act in our regulatory process, meaning taking into consideration comments submitted by ALL commenters, including environmental NGOs, the public, and other commenters.”

For the public, much is at stake. Under Pruitt, who sued the EPA 14 times as Oklahoma’s attorney general, the agency already has
declined to ban a pesticide linked to neurological damage in children; frozen requirements to reduce water pollution from coal-fired power plants and opened the door to loosening limits on toxic coal waste. The EPA most recently proposed eliminating the Clean Power Plan, an Obama administration rule aimed at reducing carbon emissions in the power sector.

“These rules [being rolled back] aren’t perfect by any stretch of the imagination. There are ways to improve things,” said Gordon Binder, who served as chief of staff for then-EPA Administrator William Reilly under President George H.W. Bush. “But Pruitt’s come in with a flyswatter and is slapping them down instead of laying out the problems with a rule and saying, ‘How can we fix it?'”

Most of the 46 political appointees working at EPA previously worked for climate change doubters or industry.

There’s a striking absence of high-level leadership at the EPA. Only one of 13 positions requiring Senate confirmation—Pruitt’s—is filled. These positions—higher-ranking than those held by the 45 political appointees—include leaders of key agency offices that oversee air, water and other programs. Six people have been nominated for the 12 open slots and are awaiting confirmation (although
two of them have joined the EPA in the meantime as senior advisers).

Most major decisions are made on the third floor of the William Jefferson Clinton South Building on Pennsylvania Avenue, where Pruitt and his handful of confidants have their offices. Among those who most prominently have Pruitt’s ear: EPA Chief of Staff Ryan Jackson, who previously held the same position with Inhofe, and Samantha Dravis, who worked with Pruitt at the Republican Attorneys General Association and now leads the EPA’s Office of Policy.

Dravis, widely seen as Pruitt’s closest adviser, came to the agency with a background in law and politics but little environmental experience. That’s a departure from her two immediate predecessors, who were already at the EPA when they were tapped to lead the policy office.

Jackson helped Inhofe negotiate major bipartisan deals in the Senate, such as the passage of federal chemical-policy reform. Still, emails released under the Freedom of Information Act to The New York Times show that Jackson directed career staff to deny a petition seeking to ban
chlorpyrifos, a pesticide suspected of harming children’s brains, directly contradicting the recommendations of EPA scientists.

Bowman said in an email that career staff were “instrumental” in drafting the denial. The former acting head of the EPA’s chemicals office, a career employee who left the agency last month, told the Times she opposed the decision, even as she followed Jackson’s instructions.

Other influential political appointees include Sarah Greenwalt, senior adviser to the Office of the Administrator, who worked for Pruitt when he was Oklahoma’s attorney general; Bowman, head of public affairs, who came from the American Chemistry Council, a chemical-industry trade group; and Mandy Gunasekara, a senior policy adviser who worked on the Republican staff of the Senate Environment and Public Works Committee.

Nine career staff members told the Center for Public Integrity that their opinions seem to hold little weight. They are excluded from meetings, they said, and their advice on agency operations is often disregarded. Some believe this is because of the flurry of leaks that have come from inside the agency since Pruitt took office. Political appointees have lashed out at suspected leakers and relieved them of work assignments, even in the absence of proof, career employees said.

“They are terrified of career staff leaking,” one said. “And once they get an idea in their head [about] someone, they won’t change it.”

Bowman said, “Those concerns have not been brought to our attention. And if they are we will do everything we can to address them.”

Pruitt has broken with tradition by foregoing many introductory briefings with career staff designed to help new administrators set priorities, several current and former employees said. Instead, he’s worked to roll back EPA rules, an effort that also diverges from common practice.

Political appointees are taking more of a hands-on role in tasks career employees previously would have handled. Take, for example, a recent
notice announcing EPA plans to reconsider whether certain vehicle-emission standards for greenhouse gases were too strict. Career staff had drafted a concise version of the notice, but appointees expanded the number of vehicles affected by the review and made the Department of Transportation the lead agency on the decision, despite the EPA’s legal obligations to control planet-warming emissions under the Clean Air Act.

“This was a much more major re-write” than would have happened under previous administrations, said an EPA employee familiar with the matter. “At least one plausible outcome of this process,” the employee said, “is that the EPA would unilaterally abdicate its [legal] responsibility.”

On the rare occasions when career employees are asked to brief Pruitt, he seems unwilling to change his anti-regulatory posture on major industry priorities, according to some career employees. Betsy Southerland, who headed an office within the EPA’s water program until August, said her team met with Pruitt twice about a
rule designed to limit wastewater discharges from power plants as he considered weakening parts of it.

The team told Pruitt that industry arguments against the rule already had been considered and found to be inaccurate. They offered more nuanced actions the administrator could take to address concerns expressed by the Small Business Administration, a separate federal agency; and the Utility Water Act Group, a lobbying organization. Pruitt was unmoved, she said. In August, the EPA announced it would reconsider key parts of the rule.

“You get the feeling that his mind was made up before we started the briefing process,” Southerland said. “It looked like he was kind of checking the box to meet with us.” The Times found similar behavior by Pruitt when the EPA declined to ban chlorpyrifos. Pruitt didn’t follow agency scientists’ advice, having “promised farming industry executives who wanted to keep using the pesticide that it is ‘a new day and a new future,'” the Times
reported.

These episodes could simply reflect inexperience—appointees struggling to figure out the agency they lead. They also could reflect pressure placed on the EPA by executive orders and presidential memoranda to act quickly on big-ticket issues like the Clean Power Plan.

But Pruitt’s pro-industry bent has convinced some current and former employees that he and his like-minded advisers are aiming to destroy the EPA from the inside.

“Look, I think he does not support what the agency has been trying to do for 40 years,” said William Ruckelshaus, EPA administrator under Presidents Richard Nixon and Ronald Reagan. “He wants to dismantle—not improve or reform—the regulatory system for protecting public health and the environment.”

Reposted with permission from our media associate The Center for Public Integrity.