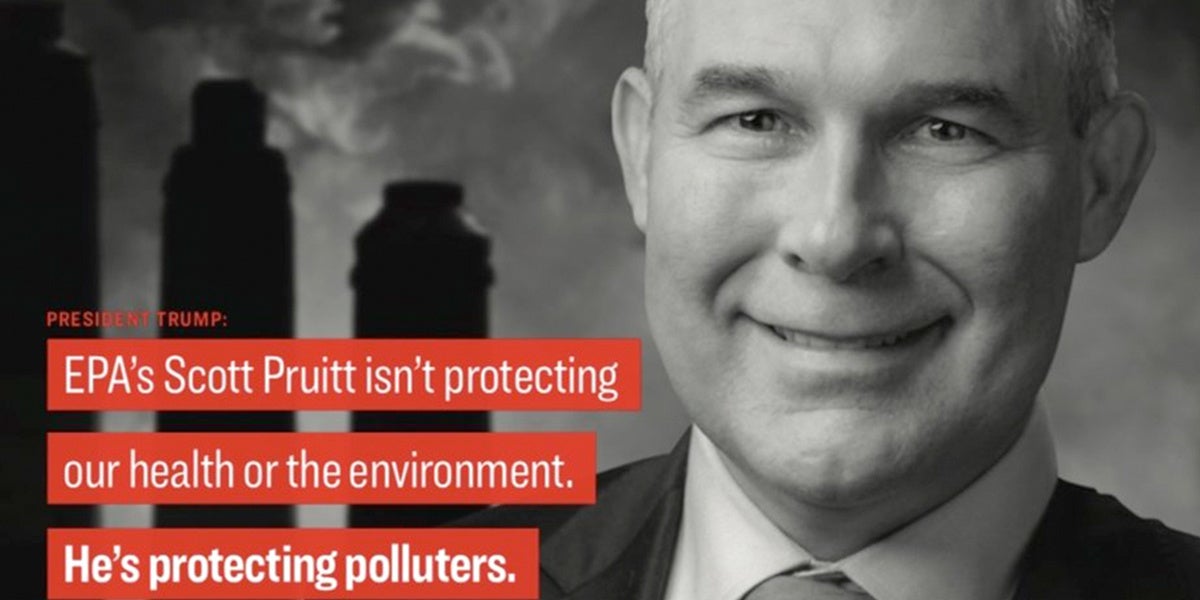 At 10 a.m. Eastern time, Pruitt will face the House Energy and Commerce subcommittee on the Environment (
live stream here). Then at 2 p.m., he will face the House Appropriations subcommittee on the Interior (live stream here). The hearings are supposed to be about the EPA budget but Pruitt is expected to hear tough questions on a growing list of ethical allegations.

Pruitt, who denies the science of
climate change, has repeatedly rolled back environmental rules in favor of fossil fuels and other business interests. President Trump and other conservatives have praised the EPA chief’s work.

However, their support appears to be flagging as Pruitt’s controversies mount, including his request for a
$43,000 soundproof phone booth (which violated federal law); his $50-a-night stay at a Capitol Hill condo owned by the wife of an energy lobbyist; his questionable use of taxpayer money for first-class and charter flights, as well as a ’round-the-clock security detail; and reports that he gave large pay raises to his closest aides.

According to
Reuters, there are nearly a dozen pending investigations into Pruitt with the EPA inspector general, the Government Accountability Office (GAO) and the White House Office of Management and Budget, as well as the U.S. House of Representatives oversight committee.

Rep. John Shimkus (R-Ill.), who chairs the Energy and Commerce subcommittee and defends Pruitt for doing a “good job” with policy, told POLITICO ahead of the hearing: “It could be pretty painful, but when you accept the position of a senior administrator in a federal agency you’ve got to expect [that].”

On the other side of the political aisle, 131 representatives and 39 senators—all Democrats and one Independent—
signed a resolution calling for him to resign. The document represents a record number of senators to formally demand a cabinet official to step down.

Rep. Diana DeGette (D-Colo.), a member of the Energy and Commerce subcommittee, told
The Hill to expect “fireworks” during the hearing.

Good to see these folks giving @EPAScottPruitt a warm welcome as he arrives at Capitol Hill. He's testifying before the @EnergyCommerce committee, and my Democratic colleagues and I plan to get answers from him about his many ethical lapses. #BootPruitt pic.twitter.com/0zmsZK8IDR

On Thursday, 40 national civil rights, labor, conservation and environmental organizations took out a full-page ad on the back cover of POLITICO calling for Pruitt’s resignation or firing.

“With each new investigation, Scott Pruitt’s disregard for ethics and the rule of law is becoming increasingly egregious and unacceptable. And so is his blatant hostility to the central mission of the EPA, which is to protect public health and the environment,” said
Natural Resources Defense Council President Rhea Suh in a statement. “Enough is enough. It’s time for him to go.”

Pruitt has
blamed his staff on the excessive spending on travel, security and pay raises. He also claimed that his Capitol Hill condo was rented at the market rate (it’s not).

In his
witness statement released ahead of the first hearing, the EPA boss avoided any mention of the controversies.

“I will focus on key objectives to improve air quality, provide for clean and safe water, revitalize land and prevent contamination, ensure the safety of chemicals in the marketplace, assure compliance with the law, and improve efficiency and effectiveness,” Pruitt will say for his opening remarks.

As for how he will defend himself at Capitol Hill today, the
New York Times obtained an internal EPA document indicating that Pruitt may continue to blame his staff for many of the ethical questions.

“We’re evaluating these concerns and we expect the EPA administrator to answer for them and we’ll keep you posted,” she said.