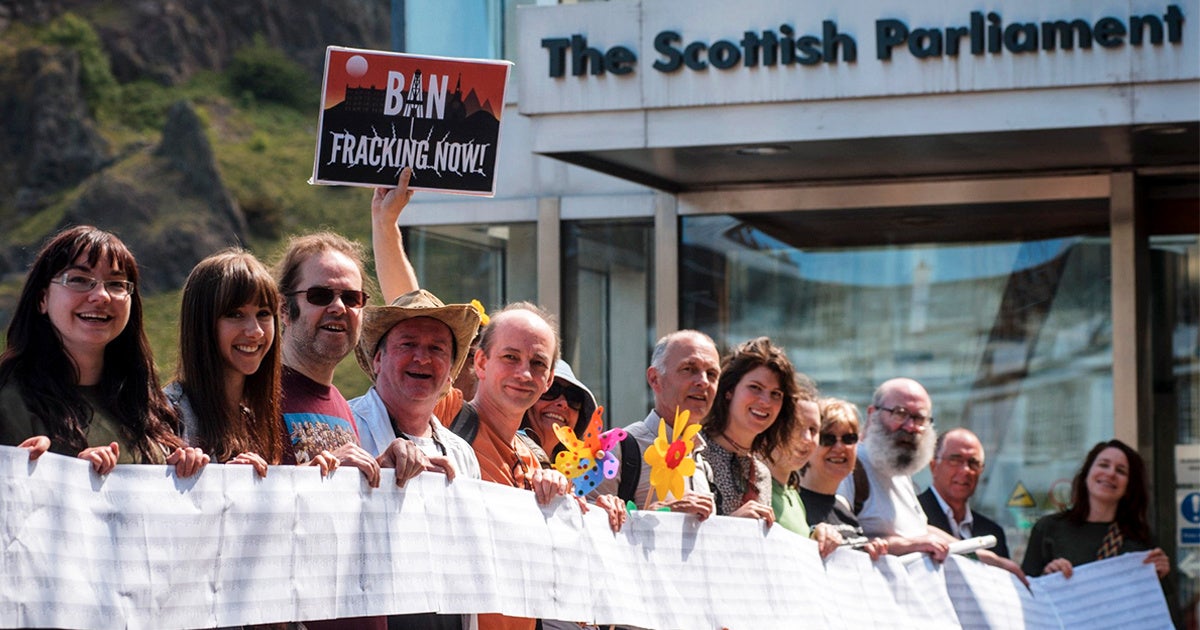 The Scottish government has said fracking is set to be permanently banned following “overwhelming” public support for outlawing the controversial process, it was announced Tuesday.

Unlike in England, fracking has been under a temporary halt in Scotland since 2015, and an extensive public consultation on its long-term future was carried out earlier this year.

Speaking to members of the Scottish Parliament in Edinburgh, the Scottish Environment Minister Paul Wheelhouse said the ban should be extended “indefinitely” and that “the Scottish government will not support the development of unconventional oil and gas in Scotland.”

The proposed ban, which will make use of planning and environmental regulation powers devolved to Scotland from the UK government in London, will be put to the Scottish Parliament for a vote later this year. Campaigners expect the ban to successfully pass through this process.

In addition to a number of expert reports on the risks posed by fracking, the public consultation which closed in May found that around 99 percent of the 60,000 responses opposed fracking.

“The views expressed through our consultation demonstrated that communities across Scotland, particularly in densely populated areas where developments could potentially take place, are not convinced there is a strong national economic argument when balanced against the risk and disruption they anticipate in areas, such as transport, pollution, crucially, their health and wellbeing,” Wheelhouse said.

The announcement was welcomed by green groups including WWF and Friends of the Earth Scotland who said that “the fracking industry must be banned to avoid potentially devastating impacts to people’s health, the climate and our natural environment.”

But Friends of the Earth Scotland urged the Scottish government to commit to passing a specific law to ban fracking, which would go beyond the proposed use of planning measures.

This will only be possible, however, when a set of further legislative powers already passed over to Scotland from London have gone through a technical transferral process.

The proposed use of planning powers is “the right interim approach,” Friends of the Earth Scotland said in a statement, but “legislating to ban fracking provides the strongest protection for communities and the environment, and sends a clear message about the need to leave fossil fuels in the ground in the fight against climate change.”

The Scottish government’s proposal to ban fracking permanently follows a drawn-out passage of research and exploration into the potential for unconventional fossil fuel extraction in Scotland, alongside burgeoning campaigns against it.

Both England and Scotland are estimated to have modest amounts of exploitable shale gas—though less than in the U.S., whose use of shale gas for its own energy security has often been touted as a model by pro-fracking voices.

In June 2014, the British Geological Survey estimated there was 80 trillion cubic feet of shale gas in central Scotland, which was less than in areas of dense shale rock in England.

In June 2016 the Scottish Parliament voted in favor of extending the temporary ban, though this was non-legislative and the government insisted that proper research and consultation should be carried out before a final decision was taken.

The situation in England has been very different, with the UK government continuing to issue exploration and drilling licenses. The Conservatives are the only party to support fracking.

Shale gas company Cuadrilla is currently in conducting exploratory drilling in Lancashire in the face of staunch public opposition. The company was only able to begin its operations at Preston New Road, in between Blackpool and Preston, after the Communities Secretary overruled the local council’s opposition to the activity.

Reposted with permission from our media associate DeSmogUk.