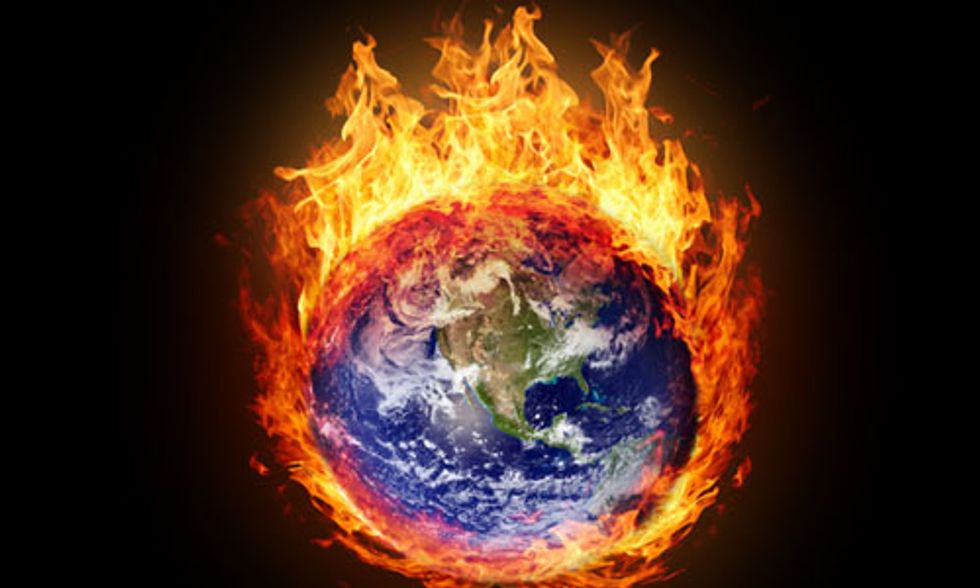 It’s official, even though it won’t be conclusive for a few months yet: if present trends continue, 2014 will be one of the hottest years on record—and quite possibly the hottest of them all.

Preliminary estimates by the World Meteorological Organization (WMO)—published to provide information to the UN Framework Convention on Climate Change annual round of negotiations, currently being held in Lima, Peru—show that this year is set to be a record breaker largely because of record high global sea surface temperatures.

If November and December follow the same trend, then 2014 will probably be the hottest year on record.
Photo credit: Shutterstock

These, combined with other factors, helped to cause exceptionally heavy rainfall and floods in many countries and extreme drought in others.

Christiana Figueres, executive secretary of the convention, said: “Our climate is changing, and every year the risks of extreme weather events and impacts on humanity rise.”

It is the warming of the oceans—which the WMO says “will very likely remain above normal until the end of the year”—that is chiefly perplexing the scientists.

The WMO’s provisional statement—to be finalized in March next year—on the Status of the Global Climate in 2014 shows that the global average air temperature over the land and sea surface from January to October was about 0.57°C above the average of 14°C for the 1961 to 1990 reference period, and 0.09°C above the average for 2004 to 2013.

If November and December follow the same trend, the WMO says, then 2014 will probably be the hottest on record, ahead of 2010, 2005 and 1998. This confirms the underlying long-term warming trend.

“The provisional information for 2014 means that 14 of the 15 warmest years on record have all occurred in the twenty-first century,” said the WMO secretary-general, Michel Jarraud. “There is no standstill in global warming.

“What we saw in 2014 is consistent with what we expect from a changing climate. Record-breaking heat, combined with torrential rainfall and floods, destroyed livelihoods and ruined lives. What is particularly unusual and alarming this year are the high temperatures of vast areas of the ocean surface, including in the northern hemisphere.

“Record-high greenhouse gas emissions and associated atmospheric concentrations are committing the planet to a much more uncertain and inhospitable future.”

The high January to October temperatures occurred in the absence of a full El Niño-Southern Oscillation (ENSO). An ENSO occurs when warmer than average sea-surface temperatures in the eastern tropical Pacific combine, in a self-reinforcing loop, with atmospheric pressure systems, affecting weather patterns globally.

Among the remarkable features of 2014’s first 10 months are land surface temperatures. The WMO says they averaged about 0.86°C above the 1961 to 1990 average, the fourth or fifth warmest for the same period on record.

Global sea-surface temperatures were unequivocally the highest on record, at about 0.45°C above the 1961 to 1990 average. Temperatures were particularly high in the northern hemisphere from June to October for reasons, the WMO notes, that “are subject to intense scientific investigation”.

The ocean heat content for January to June was estimated to depths of 700 and 2,000 meters, and both were the highest recorded. Around 93 percent of the excess energy trapped in the atmosphere by greenhouse gases from fossil fuels and other human activities ends up in the oceans, so the heat they contain is essential to understanding the climate system.

The early part of 2014 saw global average measured sea level reach a record high for the time of year. Arctic sea ice extent was the sixth lowest on record, according to the National Snow and Ice Data Center in the U.S., but Antarctic daily sea ice reached a new record for the third consecutive year.

Some impressively anomalous rainfall and floods made 2014 a year to forget as fast as possible. The UK winter was the wettest on record, with 177 percent of the long-term average precipitation. In May, devastating floods in southeast Europe affected more than two million people, and in Russia, in late May and early June, more than twice the monthly average precipitation fell in parts of southern Siberia.

In September, southern parts of the Balkan peninsula received over 250 percent of the monthly average rainfall, while parts of Turkey had more than 500 percent. Heavy rains caused severe flooding in northern Bangladesh, northern Pakistan and India, affecting millions of people.

But the incidence of tropical storms and cyclones recorded was lower than the 1981 to 2010 average in much of the world.

Globally-averaged atmospheric levels of CO2 reached 396 parts per million (ppm), approximately 142 percent of the pre-industrial average. The increase from 2012 to 2013 was 2.9 ppm, the largest year to year increase.