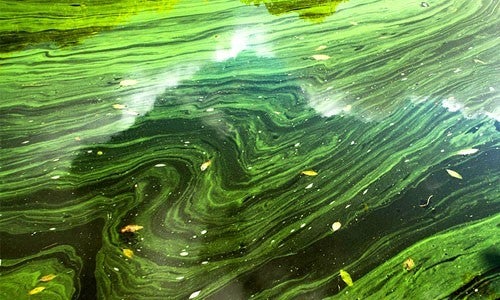 Wind and solar energy remain the only obvious replacements for fossil fuels, but recent research shows that scientists are clearly thinking outside the box to come up with future alternatives.

They have recently been able to report at least theoretical progress with nuclear energy, algae and a novel alloy.

In just a few days, they proved that thermonuclear fusion—once somebody works out how to make it happen—will be economically viable. 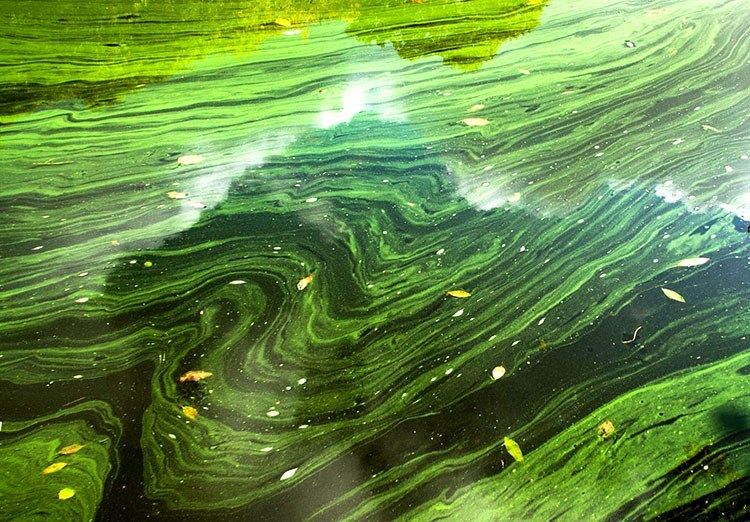 Swirling patterns of green-blue algae on the surface of a dam in Northern Ireland. Photo credit: Bobby McKay / Flickr

They have worked out how to cultivate green algae for biofuel in huge quantities at US$50 a barrel, which is about the cost of crude oil.

They have even found a way to get electrical energy directly from cyanobacteria or blue-green algae.

And they have exploited an alloy that can deliver a colossal pulse of electric power when you kick it.

None of these technologies have advanced beyond the experimental stage, but all are testaments to the ingenuity now being deployed in the world’s laboratories and experimental start-ups.

Fusion power—not to be confused with nuclear fission—exploits the thermonuclear conversion of hydrogen to helium with little or no noxious discharge and the generous release of energy.

This is what powers the sun and fuels the planet’s life. It is also the basis of the thermonuclear bomb. For the last 60 years, humans have been trying to make fusion work peacefully on Earth, with only tantalizing flickers of success.

But if it does work, British scientists report in the journal Fusion Engineering and Design, it will not be too expensive.

They analyzed the cost of building, running and ultimately decommissioning a fusion power station and found it comparable to fission or nuclear energy.

The challenge of nuclear fusion is to heat stripped-down heavy hydrogen atoms to 100 million Celsius so that they fuse into helium, while finding a way to tap the released energy and at the same time keep the reaction going.

The International Thermonuclear Experimental Reactor, now being built in the South of France, might in a decade show that it could happen. Assuming it works, the process should be affordable. There would be no high-level radioactive waste, no problems with finding fuel and no by-product that could be turned into nuclear weaponry.

“Obviously we have had to make assumptions, but what we can say is that our predictions suggest fusion won’t be vastly more expensive than fission,” said Damian Hampshire, of the Center for Materials Physics at Durham University, UK.

“Calculating the cost of a fusion reactor is complex, given the variations in the cost of the raw materials and exchange rates. However, this work is a big step in the right direction,” adds Hampshire.

Biofuel is currently based mostly on the conversion of agricultural crops—sugar cane or corn—to feedstock for ethanol, which can be converted into gasoline or other fuels. But, in a hungry world, this is not an ideal solution.

So researchers have been looking at the microbial plant life in waste water and ponds as a possible answer, with promising experimental results on the small scale.

But now an Israeli company called Univerve has pioneered a cultivation system that gets ever more sunlight to speed up photosynthesis and get the algae working ever harder.

They report in the Technology journal that they bubbled air through a suspended, modular triangular structure with transparent walls so the algae get their solar energy from all sides and their oxygen at all times.

They promise green reactors up to 100 meters, holding 100 cubic meters of “production medium” or algae. There is a bonus: algae make omega-3 oils, so it could also serve the food industry and deliver cattle feed, as well as feedstock for the biofuel business.

In Montreal, Canada, researchers report in the same journal that they can tap into the photosynthesis in the tank full of algae and directly retrieve clean energy in the form of electricity.

The process involves tapping into the electron transfer chains in the plant life that turn sunlight into carbon-based tissue. In essence, the tank of cyanobacteria serves as the anode in a biological battery.

Having demonstrated the principle, the next step is to work out how to get commercially-useful power from what becomes, quite literally, the power plant.

In the U.S., civilian and military scientists have been looking again at an alloy of iron doped with gallium that has been around for decades, but which has just shown that it can produce electricity.

It has been named Galfenol and is described in the Journal of Applied Physics as magnetoelastic. Squeeze or deform it and its magnetisation changes. Stick it in a magnetic field and it changes shape.

The scientists found that when boxed in a clamp so that it could not deform, wrapped with copper wire and subjected to a powerful impact, Galfenol generated as much as 80 megawatts of instantaneous power per cubic meter. That is, it converted mechanical energy into electromagnetic discharge.

Right now, like the other advances, it remains a discovery awaiting an application. But energy researchers are certainly applying great ingenuity to the search for clean energy sources.