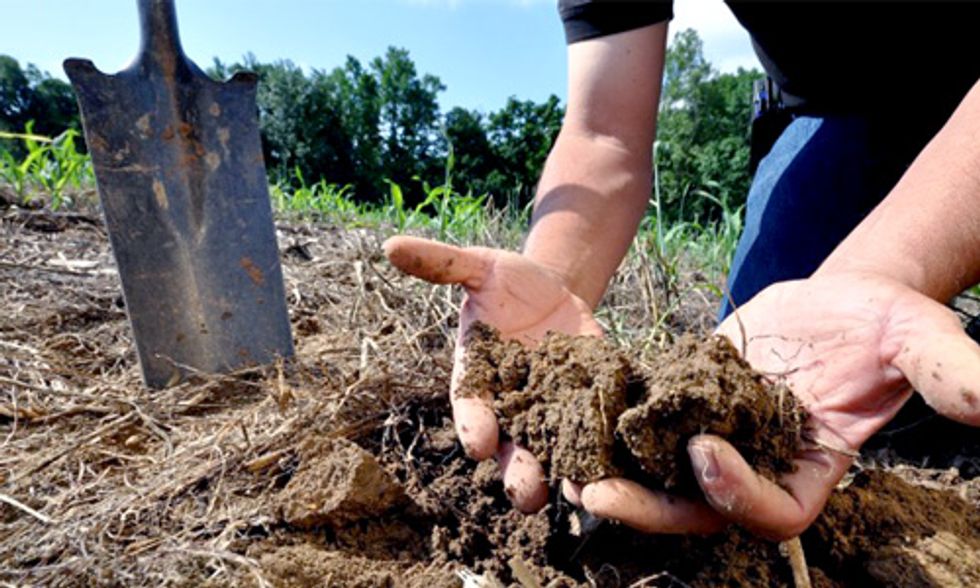 Climate scientists anxious to find ways to limit atmospheric greenhouse gases have started to look at the ground beneath their feet.

They calculate that although the world’s soils already hold 2.4 trillion tonnes of gases in the form of organic carbon, there’s room for more.

Scientists from the U.S. and Scotland report in Nature journal that with a few changes to agricultural practice, there would be room for another 8 billion tonnes.

“In our fight to avoid dangerous climate change in the 21st century, we need heavyweight allies,” Dave Reay, a geoscientist and specialist in carbon management at Edinburgh University, said. “One of the most powerful is right beneath our feet. Soils are already huge stores of carbon, and improved management can make them even bigger."

“Too long they have been overlooked as a means to tackle climate change," Reay continued. "Too often have problems of accurate measurement and reporting stymied progress towards climate-smart soil management.

“With the surge in availability of big data on soils around the world, alongside rapid improvements in understanding and modeling, the time has come for this big-hitter to enter the ring.”

In fact, researchers have been conscious for years that the soils have a powerful role to play. They have identified the agencies that control a soil’s capacity for carbon. They have tested climate models to check on emissions from soils. They have experimented with techniques for conserving soil carbon. And they have repeatedly sounded the alarm about the stores of organic carbon in the permafrost.

But, they reason, since soils hold three times as much organic carbon as exists in carbon dioxide form in the atmosphere, better management of the terrestrial planet could help reduce emissions too.

So, the trick is: don’t degrade healthy ecosystems, because unmanaged forests and grasslands store carbon very efficiently. Wetlands drained for agriculture surrender their soil carbon, but restored wetlands soak the stuff up.

And there is a range of sustainable agricultural practices that can conserve carbon and, at the same time, continue to deliver food to the table.

Farmers could grow crops with deeper root systems, use charcoal-based composts, and exploit a suite of more efficient practices tailored to their crops and terrain. Schemes such as Cool Farm Tool could help farmers measure and manage emissions from their own land.

There would not be one big answer, but a host of varied responses. These range from better crop rotation to low tillage as opposed to deep ploughing, and from land restoration to agroforestry. All of these added together—what the researchers call the “all-of-the-above” approach—could make a big difference.

With help from science, government policymakers and new approaches, ultimately they could help soils retain the equivalent of four-fifths of the emissions released each year by the combustion of fossil fuels, the researchers say.