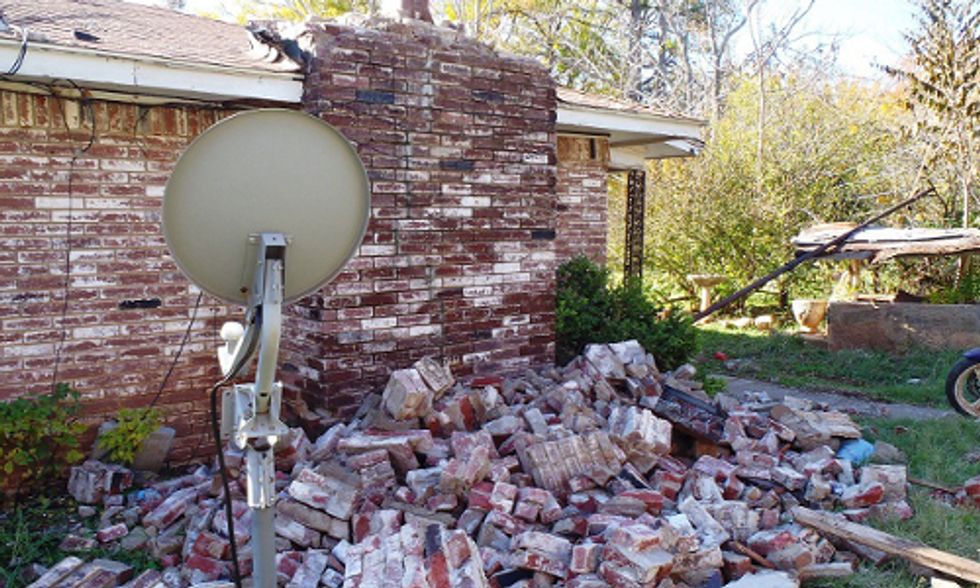 Over the last several years clusters of earthquakes have been occurring in places that rarely saw significant earthquake activity, including Texas, Oklahoma and Ohio. Those earthquakes have been connected to the wastewater injection techniques used in fracking, which researchers say activate hidden fault lines. It's referred to as "induced seismicity."

One of the homes damaged by the 5.7 magnitude earthquake in Prague, Oklahoma in 2011. Photo credit: Brian Sherrod/USGS

While most of those earthquakes have been minor—in most cases too small to feel and most under magnitude 3 on the Richter Scale—they could be getting much larger according to scientist William Ellsworth of the U.S. Geological Survey (USGS).

"The more small earthquakes we have it just simply increases the odds we're going to have a more damaging event," he said. "To some degree, we've dodged a bullet in Oklahoma."

He added that we shouldn't "expect a large earthquake tomorrow," but that it could happen at any time. Ellsworth presented the still-unpublished research at the American Association for the Advancement of Science.

Ellsworth has been warning about the danger of fracking-induced earthquakes for several years. In a 2013 paper, he wrote, "Human-induced earthquakes have become an important topic of political and scientific discussion, owing to the concern that these events may be responsible for widespread damage and an overall increase in seismicity. Earthquakes caused by injection have become a focal point, as new drilling and well-completion technologies enable the extraction of oil and gas from previously unproductive formations."

It's not controversial to say that this increase in earthquakes is caused by fracking, but the usual justification has been that they are minor, unfelt and not of sufficient magnitude to cause damage. But Oklahoma provides a dramatic example of how quakes have increased size and destructiveness. According to the USGS, the state had just two quakes greater than magnitude 3 between 1978 and 2008. In 2014, it had 145. That includes 20 with a magnitude of more than 4. In November, a series of three quakes, one reaching 4.2 magnitude, caused some structural damage such as cracks in walls. And a 5.7 magnitude earthquake hit Prague, Oklahoma in 2011, destroying 14 homes in the rural area.

"The rate of earthquakes in Oklahoma has increased remarkably since October 2013—by about 50 percent—significantly increasing the chance for a damaging magnitude 5.5 or greater quake in central Oklahoma," said the USGS.

The government agency said, "They do not seem to be due to typical, random fluctuations in natural seismicity rates. Significant changes in both the background rate of events and earthquake triggers needed to have occurred in order to explain the increases in seismicity, which is not typically observed when modeling natural earthquakes. The analysis suggests that a likely contributing factor to the increase in earthquakes is triggering by wastewater injected into deep geologic formations."

Ellsworth isn't the first scientist to warn that fracking earthquakes could be getting larger. In May at the annual meeting of the Seismological Society of America, several scientists suggested that future quakes could be larger than anticipated.

"Induced seismicity complicates the seismic hazard equation,” Gail Atkinson, a professor at the University of Western Ontario and one of Canada's foremost experts on seismic hazard, said at the meeting. She said that larger quakes in the future might overwhelm structures such as dams and nuclear power plants built for areas of low seismicity. "There is a real dearth of regulations. We need a clear understanding of the likely induced seismicity in response to new activity."