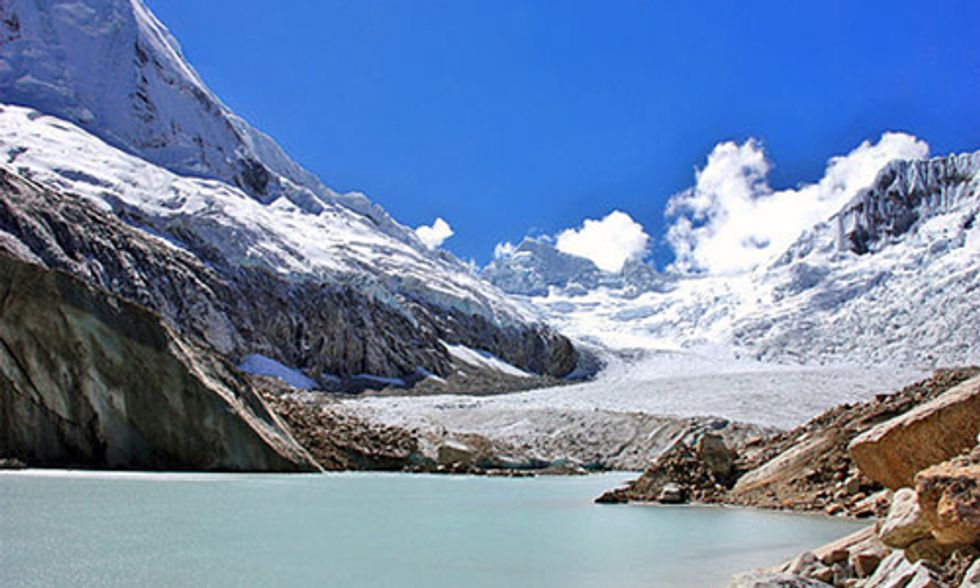 Glaciers such as Artesonraju in the Peruvian Andes are melting at record rates. Photo credit: Edubucher via Wikimedia Commons

In Austria, scientist Ben Marzeion of University of Innsbruck’s Institute of Meteorology and Geophysics was part of a team that tracked changes in glaciers around the world between 1851 and 2010, using 19th-century photos and paintings as a baseline. Computer models allowed them to take into account natural factors like volcanic eruptions and variations on weather patterns.  Their research, reported in the journal Science, found that the pace of glacier retreat has picked up dramatically in the last two decades.

Dr. Marzeion's group figured that around a quarter of the melting between 1851 and 2010 is human-caused, and that between 1991 and 2010, the amount of human-caused melting has increased by two-thirds.

“In the 19th century and first half of the 20th century we observed that glacier mass loss attributable to human activity is barely noticeable, but since then has steadily increased,” said Dr Marzeion.

Meanwhile, the Proceedings of the National Academy of Sciences of the U.S. just published new research about "Rossby waves," waves in the jet stream that drive heat into cooler areas and cold into warmer areas, discovering that these waves are increasing in size and getting stuck, causing prolonged heat waves. The wave patterns are disrupted as more ice melts in Arctic regions, exposing more open sea which absorbs heat rather than reflecting it back into space.

With the Arctic warming twice as fast as the rest of Earth, its temperatures become more similar to other regions. But it's those variations that regulate the atmospheric circulation patterns that determine weather.

And, says the study's co-author Hans Joachim Schellnhuber, founding director of the Potsdam Institute for Climate Impact Research, “This melting of ice and snow is actually due to our lifestyle of churning out unprecedented amounts of greenhouse gases from fossil fuels."