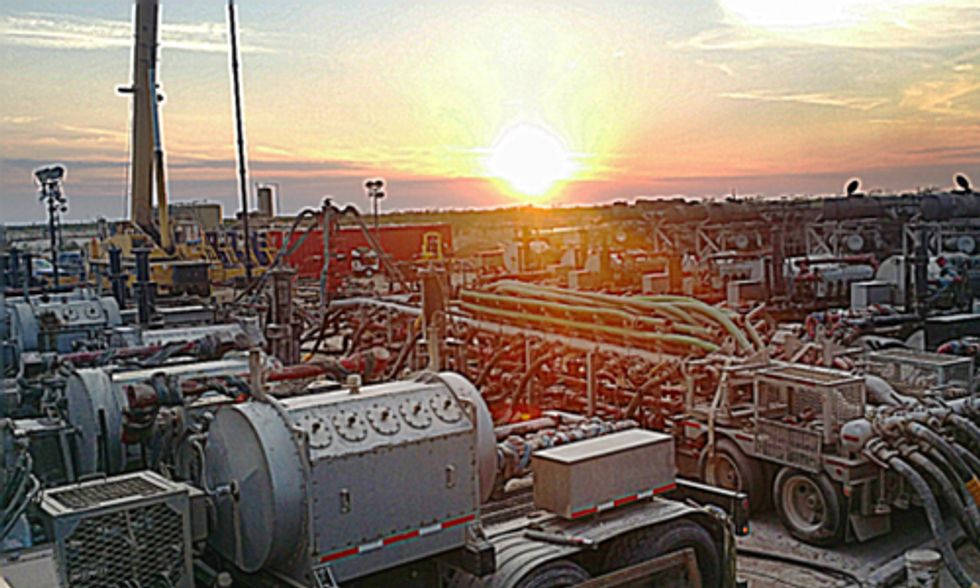 The argument that fracking can help to reduce greenhouse gas emissions is misguided, according to an international scientific study, because the amount of extra fossil fuel it will produce will cancel out the benefits of its lower pollution content.

Pipe dream: a fracking operation in the Permian Basin region of Texas and New Mexico.
Photo credit: Rhod08 via Wikimedia

The study, published today in the journal Nature, recognizes that technologies such as fracking have triggered a boom in natural gas. But the authors say this will not lead to a reduction of overall greenhouse gas emissions.

Although natural gas produces only half the CO2 emissions of coal for each unit of energy, its growing availability will make it cheaper, they say, so it will add to total energy supply and only partly replace coal.

Their study, based on what they say is “an unprecedented international comparison of computer simulations,” shows that this market effect nullifies the advantage offered by the lower pollution content of the gas.

The lead author, Haewon McJeon, staff scientist at the Joint Global Change Research Institute, a partnership between the U.S. Department of Energy’s Pacific Northwest National Laboratory (PNNL) and University of Maryland, said: “The upshot is that abundant natural gas alone will not rescue us from climate change.”

Fracking, horizontal drilling and other techniques have led to surging gas production, especially in the U.S. “Global deployment of advanced technology could double or triple global natural gas production by 2050,” McJeon said.

This might eventually mean not lower CO2 emissions, but emissions by the middle of the century up to 10 percent higher than they would otherwise be.

The report, which is the work of five research groups from Germany, the U.S., Austria, Italy and Australia, said the replacement of coal by natural gas was fairly limited. And it might replace not just coal, the study had found, but low-emission renewable energy and nuclear power as well.

One of the co-authors, Nico Bauer, a sustainable solutions expert at the Potsdam Institute for Climate Impact Research (PIK), Germany, said : “The high hopes that natural gas will help reduce global warming because of technical superiority to coal turn out to be misguided because market effects are dominating.

“The main factor here is that an abundance of natural gas leads to a price drop and expansion of total primary energy supply.”

Not only could this lead to an overall increase in energy consumption and in emissions, but increased gas production would mean higher emissions of methane from drilling leakages and pipelines.

The research groups projected what the world might be like in 2050, both with and without a natural gas boom. They used five different computer models, which included not just energy use and production, but also the broader economy and the climate system.

“When we first saw little change in greenhouse gas emissions in our model, we thought we had made a mistake, because we were fully expecting to see a significant reduction in emissions,” said James Edmonds, chief scientist at the Joint Global Change Research Institute. “But when we saw all five teams reporting little difference in climate change, we knew we were on to something.”

Ottmar Edenhofer, chief economist of PIK and co-chair of the Intergovernmental Panel on Climate Change (IPCC) working group on mitigation, said: “The findings show that effective climate stabilisation can be achieved only through emissions pricing.

”This requires international political co-operation and binding agreements. Technological advances can reduce the costs of climate policies, but they cannot replace policies.”

The widespread use of shale gas continues to attract policymakers, and for some it is almost an article of faith. It recently received the IPCC‘s endorsement, with Professor Edenhofer himself apparently backing it.

Paterson also said that the UK should suspend or scrap its Climate Change Act, which commits it to cutting CO2 emissions by more than 80% on 1990 levels by 2050, unless other countries follow suit.

His former Cabinet colleague, the Energy and Climate Change Secretary, Ed Davey, said that scrapping the legislation would be “one of the most stupid economic decisions imaginable.”