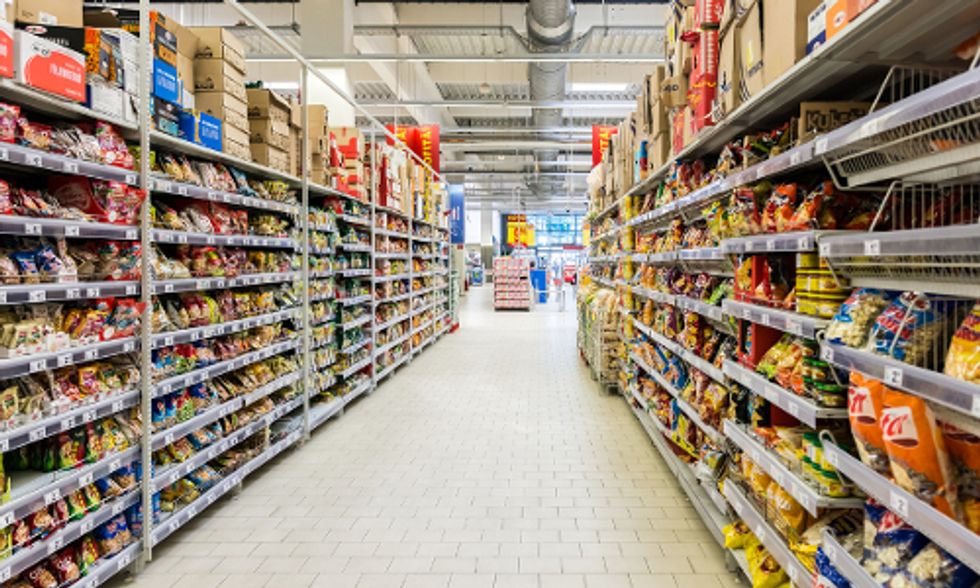 Sugar seems to be in every food we buy at the grocery, especially packaged, processed foods. Whether it's sugary beverages (including some of those supposedly good-for-you sports beverages), those boxed breakfast cereals with cartoon and animated movie characters to attract kids or even in ketchup and canned vegetables, it's hard to avoid.

The snack food aisle is only one of many places you're likely to encounter high fructose corn syrup in the grocery store.
Photo credit: Shutterstock

Even harder to avoid is table sugar's evil cousin, high-fructose corn syrup (HFCS). It's got such a bad reputation that a couple of years ago the Corn Refiners Association petitioned the U.S. Food and Drug Administration (FDA) to be allowed to change its name to "corn sugar," claiming that its long name is what gives consumers a bad impression of it. They were turned down—rightfully—because "sugar" is a solid and "syrup" is a liquid and HFCS is a liquid additive.

And it is in everything. A recent trip to the grocery store revealed that of 15 product labels checked on foods next to the checkout line (where the least nutritious snack foods tend to be pushed), 13 had HFCS. (One that did not, surprisingly, was Kit Kat bars). Why did it become so ubiquitous? If you guessed "because it's cheap," you win! With corn widely grown in the U.S. on an industrial scale, it became more economical to use HFCS to sweeten mass-marketed foods such as snack foods, fast foods and sodas.

Added sugar of any kind isn't something you want to find a lot of in any food you buy. Americans eat far more sugar than is good for them. And while virtually all corn grown in the U.S. is genetically modified, making HFCS sure to be a GMO product, table sugar aka sucrose or cane sugar is extracted from beets, another major GMO crop.

But there are reasons why consuming too much HFCS could be even worse than eating too much table sugar. A recent study by University of Utah researchers and scheduled to be published in the March issue of The Journal of Nutrition found that the sugars found in HFCS were more toxic to mice than sucrose. When they fed mice a human-sized dose of either sugar, they observed hat the HFCS-type sugar reduced both the reproductive capacity and lifespan of female mice. Female mice fed fructose-glucose died at 1.87 times the rate of females on the sucrose diet. They produced 26.4 percent fewer offspring.

And while the researchers found no difference in male mice based on the type of sugar they were given, they said it could be that both sugars were equally toxic to the male mice.

"When the diabetes-obesity-metabolic syndrome epidemics started in the mid-’70s, they corresponded with both a general increase in consumption of added sugar and the switchover from sucrose being the main added sugar in the American diet to high-fructose corn syrup making up half our sugar intake," said UU professor Wayne Potts, senior author of the study. “This is the most robust study showing there is a difference between high-fructose corn syrup and table sugar at human-relevant doses.”

So what should you do? One of the other study authors, James Ruff, has an answer.

“Our previous work and plenty of other studies have shown that added sugar in general is bad for your health," he said. "So first, reduce added sugar across the board. Then worry about the type of sugar, and decrease consumption of products with high-fructose corn syrup.”

An Eye-Opening Look at Added Sugar in Kids’ Cereals