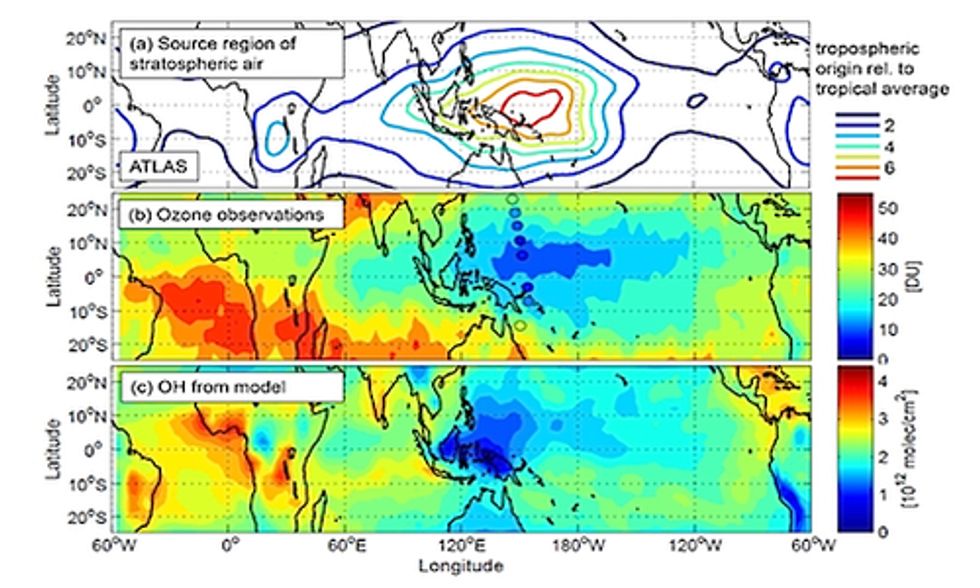 Researchers have discovered a large opening in the Earth's atmosphere that is enabling pollutants to rise into the stratosphere and destroy the ozone layer.

Location and extent of low ozone concentrations and thus of the OH hole over the West Pacific. Graphic courtesy of Alfred Wegener Institute

The hole, which is in a part of the lower atmosphere called the "OH shield," is several thousand kilometers long and is centered over the tropical west Pacific Ocean. It's relatively close to Southeast Asia—a region with a booming population and rapidly increasing air pollution.

In tropical thunderstorms over the West Pacific air masses and the chemical substances they contain are quickly hurled upward to the edge of the stratosphere. If there are sufficient OH molecules in the atmosphere, the air is extensively cleaned by chemical transformation processes. Where OH concentrations are low, such as those now found in large sections of the tropical West Pacific, the cleaning capacity of the atmosphere is reduced. Photo: Markus Rex, Alfred Wegener Institute

The hole is a major concern because the OH shield usually scrubs air of chemical compounds emitted near the ground before they can reach the stratosphere, where those compounds can persist for long periods of time, reacting with and destroying ozone, say researchers at Germany's Alfred Wegener Institute who identified the hole.

Nearly all chemical substances produced by people, animals, plants, algae or microorganisms on the ground or in the oceans react quickly with OH and break down in this process. During this chemical self-cleaning process substances that are not easily water-soluble are transformed into water-soluble products and then washed out by precipitation. Through this mechanism OH molecules remove most substances from the atmosphere. The OH molecule is therefore also called the detergent of the atmosphere. Only extremely long-lived chemical compounds, such as methane or CFCs, also known as "ozone killers", can rise through the OH shield into the stratosphere. Graphics: Markus Rex, Alfred Wegener Institute

The newly discovered phenomenon acts as a sort of elevator, researchers say, drawing chlorofluorocarbons, sulfur dioxide and other contaminants straight up to the stratosphere and bypassing the OH shield scrub.