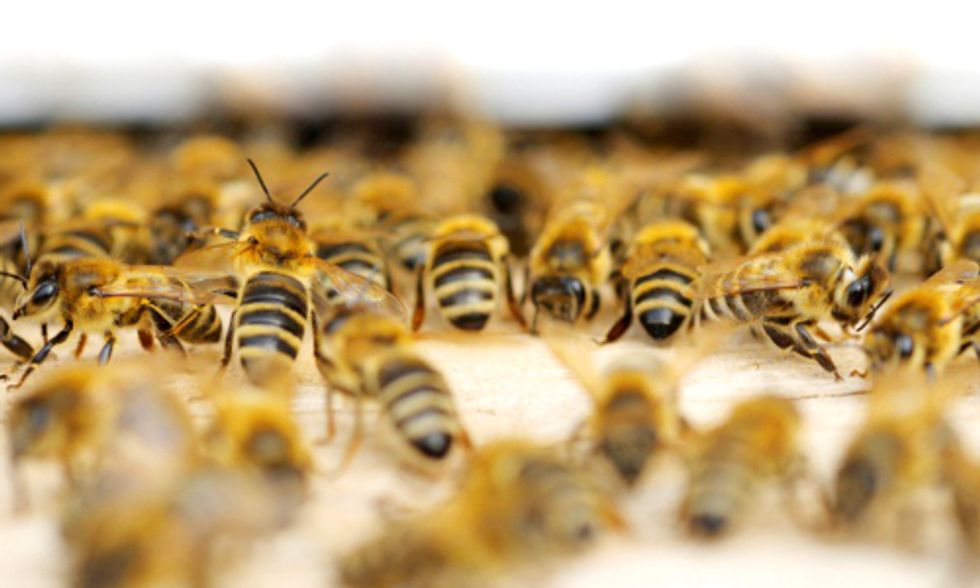 A team of scientists in Italy believe they have found the molecular mechanism through which neonicotinoid pesticides adversely impacts the immune system of honey bees. The team’s experiments suggest that exposure to neonicotinoids results in increased levels of a particular protein in bees that inhibits a key molecule involved in the immune response, making the insects more susceptible to attack by harmful viruses.

Though previous studies have indicated that exposure to minute amount of neurotoxic pesticides like neonicotinoids severely impair the immune systems of bees, making them more susceptible to pathogens, the underlying mechanism has was not yet been fully understood. The study, published in the Proceedings of the National Academy of Sciences of the United States of America, is the latest of several studies to add weight to the urgency of repeated calls from U.S. beekeeper and environmental groups for the U.S. Environmental Protection Agency (EPA) to suspend the use of neonicotinoid pesticides, as the European Commission decided this past April.

Neonicotinoids, a class of insecticides that includes clothianidin and imidicloprid, are taken up by a plant’s vascular system and expressed through pollen, nectar and gutation droplets from which bees forage and drink. They are particularly dangerous because—in addition to being acutely toxic in high doses—they also result in serious sublethal effects when insects are exposed to chronic low doses, as they are through pollen and water droplets laced with the chemical, and dust that is released into the air when coated seeds are planted with automated vacuum seed planters. These effects cause significant problems for the health of individual honey bees as well as the overall health of honey bee colonies. Effects include disruptions in bee mobility, navigation, feeding behavior, foraging activity, memory and learning, and overall hive activity.

Up until now, the causal link between insecticide exposure and immune alteration has been unclear. Francesco Pennacchio, Ph.D. of the University of Naples Federico II, and his colleagues identified a gene in insects similar to that found in other animals that is known to regulate the immune response. This gene codes for a leucine-rich repeat protein family (LRR) which has been shown to suppress the activity of a key protein involved in immune signaling, called NF-κB. When the researchers exposed bees to sublethal doses of the neonicotinoid clothianidin, they saw a significant increase in the expression of the gene encoding the LRR protein, and a concomitant suppression of the NF-κB signaling pathway. These effects were not seen when bees were exposed to the organophosphate insecticide chlorpyriphos.

The team infected bees with a common pathogen, deformed wing virus (DWV), and exposed them to clothianidin and another neonicotinoid, imidacloprid, at concentrations similar to those that would be found in the field. The researchers found significantly increased replication of the virus, which was not seen either in untreated bees or those exposed to chlorpyriphos. While the virus is common in bees and usually remains inactive, it is kept in check by the bees’ immune system. The data demonstrates that the two neonicotinoids actively promote DWV replication.

“The reported effect on immunity exerted by neonicotinoids will allow additional toxicological tests to be defined to assess if chronic exposure of bees to sub-lethal doses of agrochemicals can adversely affect their immune system and health conditions,” says team member Francesco Nazzi, Ph.D. of the University of Udine.

“Moreover, our data indicates the possible occurrence in insects, as in vertebrates, of a neural modulation of the immune response," continued Nazzi. "This sets the stage for future studies in this research area, and poses the question on how neurotoxic substances may affect the immune response.”

Since 2006, honey bees nationwide have suffered ongoing and rapid population declines, from hive abandonment and bee die-off in a phenomenon known as colony collapse disorder (CCD). These findings add a significant piece of information to the ongoing and discussion of the role of neonicotinoid pesticides’ link to CCD, and, according to researchers, this work has important implications for toxicology and risk assessment studies.

The results we report clearly indicate the need for longer-term toxicity tests, aiming at assessing how the pathogen progression in honey bees is influenced by insecticide residues and by their cumulative effects, both on adults and larvae. A comprehensive and thorough assessment of insecticide impact on bees will significantly contribute to their conservation and to the development of more sustainable protocols of intensive agriculture.