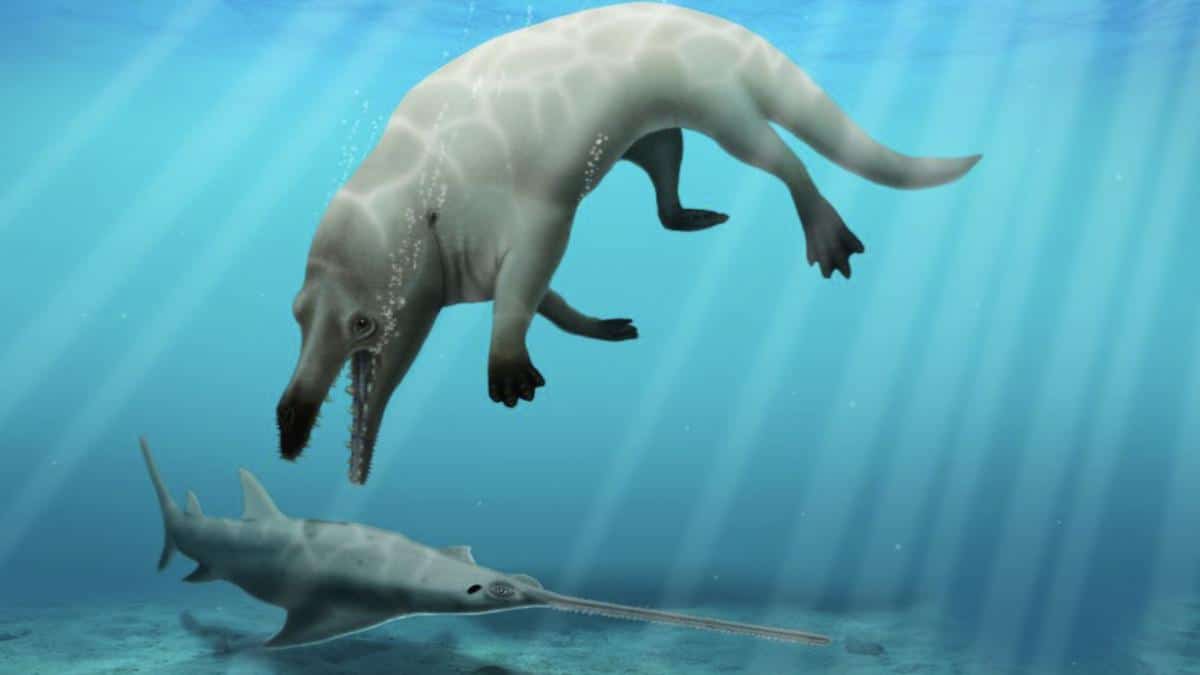 Scientists have discovered an ancient species of four-legged whale that can help explain the animals‘ evolution from land to sea.

The new whale, written up in Proceedings of the Royal Society B Wednesday, was discovered in the Egypt desert and named Phiomicetus anubis.

Whales evolved over an approximately 10 million year period from deer-like, land-dwelling herbivores to the marine carnivores we know today, the study authors explained. One step in the middle of this evolutionary process were the Protocetidae, amphibious whales that lived during the Eocene Epoch, about 56 to 33.9 million years ago. These whales would have looked very different from today’s underwater giants.

“All known protocetid whales had well-developed, non-reduced fore and hind limbs that could bear the animals’ weight outside of water, albeit probably awkwardly, as these animals were probably quite heavy,” study co-author Robert W. Boessenecker of the College of Charleston told HuffPost. “Think of seals and sea lions, for example.”

The newly discovered whale species is a medium-sized example of this group, stretching about 10 feet in length and weighing around 1,300 pounds. It lived around 43 million years ago.

The whale was discovered in the Fayum Depression in Egypt’s Western Desert, which was once underwater. That location gives it its genus name: Phiomicetus, according to Reuters.

Its species name, anubis, comes from its defining feature: a strong, jackal-like jaw, HuffPost explained. This strong jaw led researchers to name it for Anubis, the Egyptian god of the dead.

“We discovered how fierce and deadly its powerful jaws are capable of tearing a wide range of prey… this whale was a god of death to most of the animals that lived in its area,” Gohar told Insider.

Because it is an example of a semi-aquatic whale, the new find is important for learning more about whale evolution. While other four-legged whales have been found, this is thought to be the earliest semi-aquatic whale discovered in Africa to date, BBC News explained.