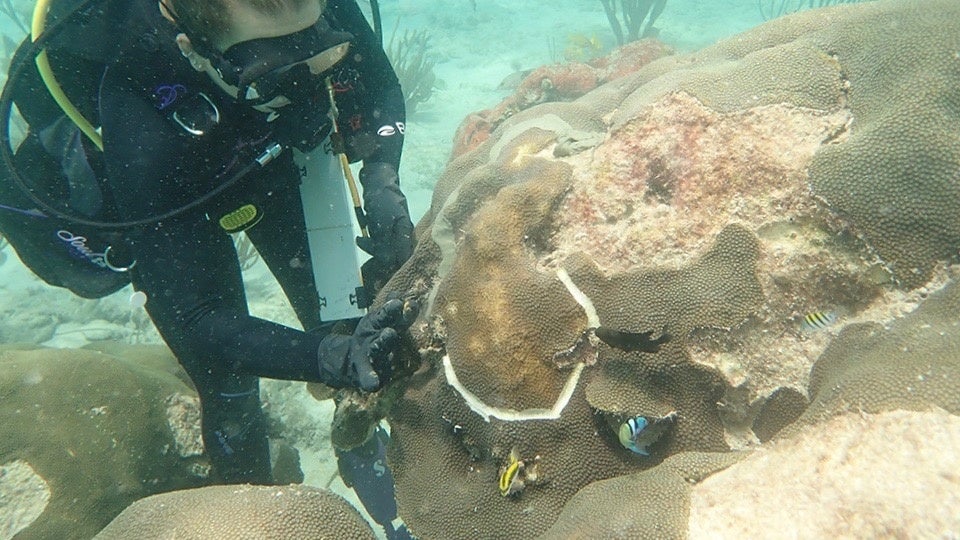 Scientists are racing to save coral reefs off the coast of St. Thomas in the U.S. Virgin Islands from a virulent, deadly disease, Reuters reported Thursday, taking the unusual step of removing infected coral from the reef.

Stony coral tissue loss disease (SCTLD) was first discovered in Florida in 2014. It begins as white patches that take over the coral, killing 66 to 100 percent of the species it infects. Between 2013 and 2018, it led to a coral decline in Florida’s Upper Keys of more than 40 percent.

“I have never seen anything that affects so many species, so quickly and so viciously—and it just continues,” Marilyn Brandt of the University of the Virgin Islands told Reuters. “All the diseases I’ve studied in the past could be considered like the flu. They come every year, seasonally, and sometimes there are worse outbreaks. This thing is more like Ebola. It’s a killer, and we don’t know how to stop it.”

"Once we see [stony coral tissue loss disease] in a colony, it will kill that colony within days, weeks, or months… It affects over 20 species here in Florida, and there have been reports of it spreading into the Caribbean.” https://t.co/ocEI7zFNJX pic.twitter.com/g8FDkJTVlI

The disease was first spotted close to the U.S. Virgin Islands in early 2019, The BVI Beacon reported Tuesday.

Once it infects a coral, it spreads quickly, at a rate of a couple of centimeters per day.

Between corals, it moves at a rate of about five kilometers (approximately three miles) per month. Since its discovery in Florida in 2014, it has impacted more than 96,000 acres of reef and spread 250 miles down the Florida coast.

SCTLD has also been spotted off the coasts of St. Maarten, the Turks and Caicos Islands, the Dominican Republic, Mexico and Jamaica.

In Florida, it has impacted half of the stony corals that make up the Florida Reef Tract, including five endangered species, Newsweek reported.

In addition to removing diseased coral, scientists have attempted to treat it by removing healthy corals and applying antibiotics directly to reefs, but scientists are also working on a long-term solution, including a potential probiotic, according to The BVI Beacon.

Scientists are also hoping to better understand the disease in order to find a cure.

“NOAA scientists are working with partners to identify a pathogen that causes the tissue loss, better characterize transmission of the disease, and understand the patterns of spread throughout the reef and overall impacts of the disease,” Florida Keys National Marine Sanctuary research coordinator Dr. Andy Bruckner told Newsweek.

Corals around the world are more susceptible to disease because of the warmer ocean temperatures caused by the climate crisis, according to Yale Environment 360. Coral bleaching, when warm water forces coral to expel the algae that give them food and color, makes coral more likely to get sick.

The coral near Miami where the disease was first discovered had just endured both a dredging project and a bleaching event, scientists told Reuters.