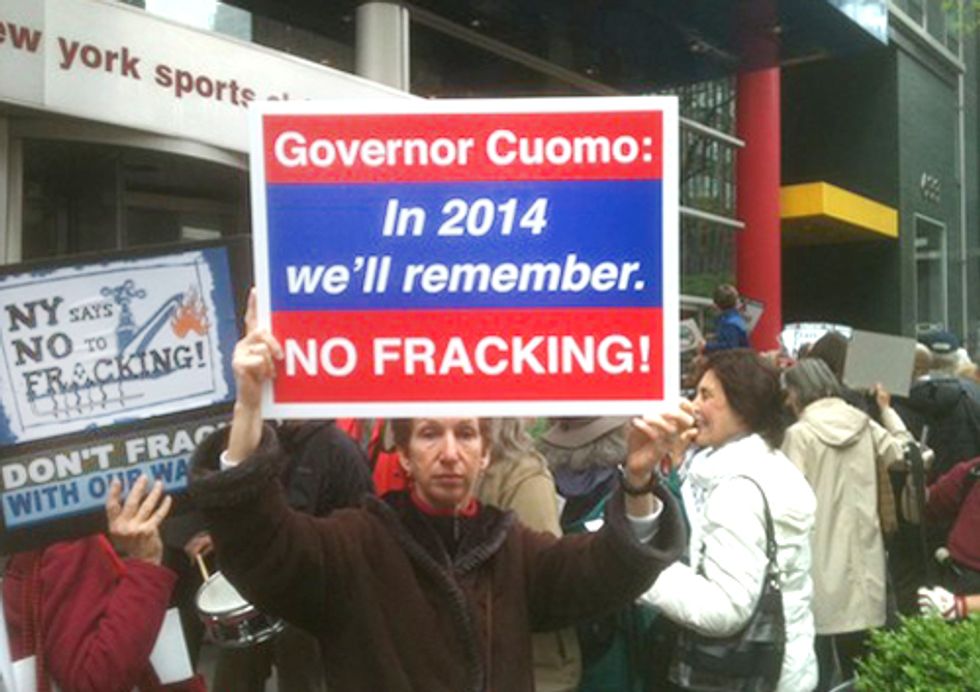 Gov. Cuomo is currently weighing whether to lift a moratorium on natural gas drilling in the Marcellus Shale in New York State. Photo by Peter Rugh.

The letter calls for the resignation of Bradley J. Field, director of the DEC's Division of Mineral Resources, which has overseen the review process. Field, on record as denying the demonstrable harm of climate change, is unqualified to lead the DEC's review of fracking and the accompanying responsibility for scientific integrity, says the letter.

In their letter, the experts make the case that the flawed DEC's review of shale gas extraction contradicts the governor's promises that science, facts and information will inform his decision on the controversial practice.

"As the Albany Times-Union reports this week that you are now moving actively to release the revised draft regulations and open parts of New York State to fracking, we write to express our complete loss of faith in the Department of Environmental Conservation. This agency has not only colluded with the gas industry in crafting regulations, its preparations to date are wholly inadequate to oversee the roll-out of an industry and practice as inherently dangerous, secretive and accident-prone as fracking."

With the release of the letter, acclaimed biologist and author, Sandra Steingraber said, "The governor cannot say he is guided by science if the scientists themselves are not at his table. And a science review crafted under the watchful eye of the gas industry cannot rightfully be called science. It is an infomercial."

Binghamton Mayor Matt Ryan—whose city is among scores of communities across New York State which have banned shale gas extraction through home rule legislation—put it this way: "Early on the governor said that he would rely on science, and we expect him to keep his promise."

"Understanding methane leakage is fundamentally important to the decision-making process on shale gas development," said Dr. Robert Howarth, David R. Atkinson professor of Ecology & Environmental Biology at Cornell University. "Our research demonstrates that methane dominates the greenhouse gas footprint of shale gas. And yet the DEC has ignored both the data and the scientists with the data to offer. I have testified on shale gas both before the Congress of the United States and the European Parliament and yet cannot get an audience in Albany."

Adam Law, founder of Physicians, Scientists, & Engineers for Healthy Energy, noted that "Governor Andrew Cuomo agrees that evidence and facts are the best way to decide whether shale gas extraction should proceed in New York State. Yet, he has repeatedly ignored any direct interaction with the scientific and medical community studying these issues."

Dominic Frongillo, founder of Elected Officials to Protect New York, questioned how someone like Bradley J. Field, leading New York State's most important scientific review, can "be credible when he ignores the conclusions of 98 percent of scientists studying one of fracking's most serious consequences." Frongillo added that "the DEC's collusion with the oil and gas industry, while ignoring independent experts and elected officials, calls the entire process into question. It's a disgrace ..."

The signatories end the letter by calling on Gov. Cuomo to do the right thing by indefinitely extending New York's moratorium on fracking. The best science, they say, shows that "safe" drilling is not possible at this time and that if the DEC were objective and inclusive of evidence and facts, it would come to the same conclusion.

At the end of their letter to Gov. Cuomo, they write, "You cannot claim to be listening to science while ignoring what independent scientists and other experts have to say."

We—the undersigned scientists, medical professionals, elected officials, business persons, and economists—protest the exclusion of qualified, independent experts from the decision-making process to permit or prohibit unconventional development of natural gas from shale formations in New York State. Letters we have sent to your office and to the Department of Environmental Conservation have received no replies. Requests for meetings with you have received no response. The failure to engage us in substantive discussions contradicts your repeated statement that science, facts, and information will form the basis of your decision.

While our voices have been ignored, the Department of Environmental Conservation has rolled out the red carpet to representatives of the gas industry and engaged them in reciprocal conversation. Gas industry representatives have enjoyed meetings with high-level officials, sneak peaks at the draft environmental impact statement, and same-day responses to emailed requests, as revealed by the recent Environmental Working Group report based on FOIL documents.

As the Albany Times Union reports this week that you are now moving actively to release the revised draft regulations and open parts of New York State to
unconventional shale gas extraction via hydraulic fracturing, we write to express our complete loss of faith in the Department of Environmental Conservation. This agency has not only colluded with the gas industry in crafting regulations, its preparations to date are wholly inadequate to oversee the roll-out of an industry and practice as inherently dangerous, secretive, and accident-prone as spatially intensive, high-volume fracking.

Furthermore, we call for the resignation of Bradley Field, the chief of the DEC’s Division of Mineral Resources. Mr. Field is directly responsible for the scientific integrity of the document on which your decision will rest. As a signatory to a petition that denies the demonstrable harm of climate change, Mr. Field has shown himself wholly unqualified for his position.

Governor Cuomo, the “science, facts, and information” that will inform your decision to allow or disallow unconventional shale gas development in New York State is being supplied by a climate change contrarian who works within an agency whose senior officials openly collude with the gas industry and ignore the concerns of independent experts. You are being badly served.

We believe that “safe” development of shale gas is not possible at this time using existing technologies. Were the DEC objective and inclusive of evidence and facts, it would come to the same conclusion. The best science shows that the moratorium on unconventional development of natural gas from shale formations in New York State should be indefinitely extended. The process as we know it is simply too unpredictable and dangerous to be allowed to go forward in our state.

By extending the moratorium, you have an opportunity to develop a sustainable energy policy in New York State, become an environmental champion, put yourself in harmony with public opinion, and demonstrate that you are making a sciencebased decision. You cannot claim to be listening to science while ignoring what independent scientists have to say.

It's time to do the right thing.