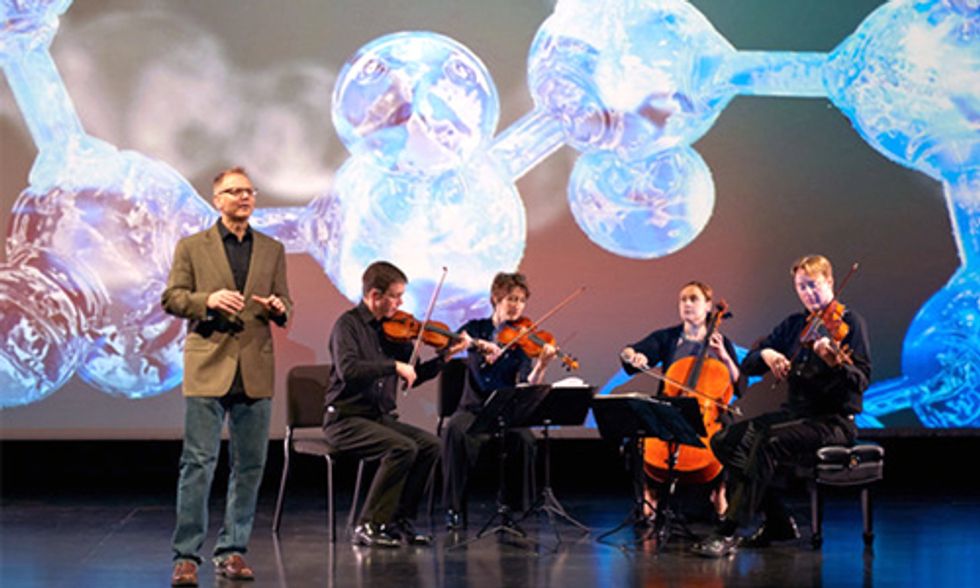 If you're like me, you wonder how we have yet to take the collective action that we need to address climate change. The signs are everywhere, and yet, as a society, we have failed to take meaningful action. Physicist Robert Davies wondered if it was simply that the public didn't know the science.

What he found, though, is the public actually does understand the problem at least on an intellectual level. "But it was still very difficult to connect with," Davies says. Palca makes the comparison of "lecturing people about the dangers of smoking and then watching them go out afterwards and light up a cigarette."

So, Davies set out to change people's behavior when it comes to climate change. He knew music had "always freed him up to see the world in new ways," so he thought, "What if we do this as a performance?" He developed a hybrid event that was a lecture on climate with a musical arrangement from the Fry Street Quartet, a professional string quartet at Utah State University.

Begun in 2012, they called it The Crossroads Project. In addition to the music, there are "evocative images taken by nature photographers and projections of paintings inspired by nature," says Palca. They have done the performance many times since, including internationally.

The project allows the audience to form "an emotional connection" to the information, which "they don't get in the science lab," Davies says. The performance isn't for climate deniers. "It's about convincing people who already believe we have these problems to start behaving like it," says Davies.

Davies believes people are bound to be affected by The Crossroads Project because pyschologists have shown that "adding emotion to a message makes that message more memorable," says Palca. "Whether it will affect audience's behavior is another question."

Watch this short video to learn more about The Crossroads Project: