Science Helping to Save Lives in Africa 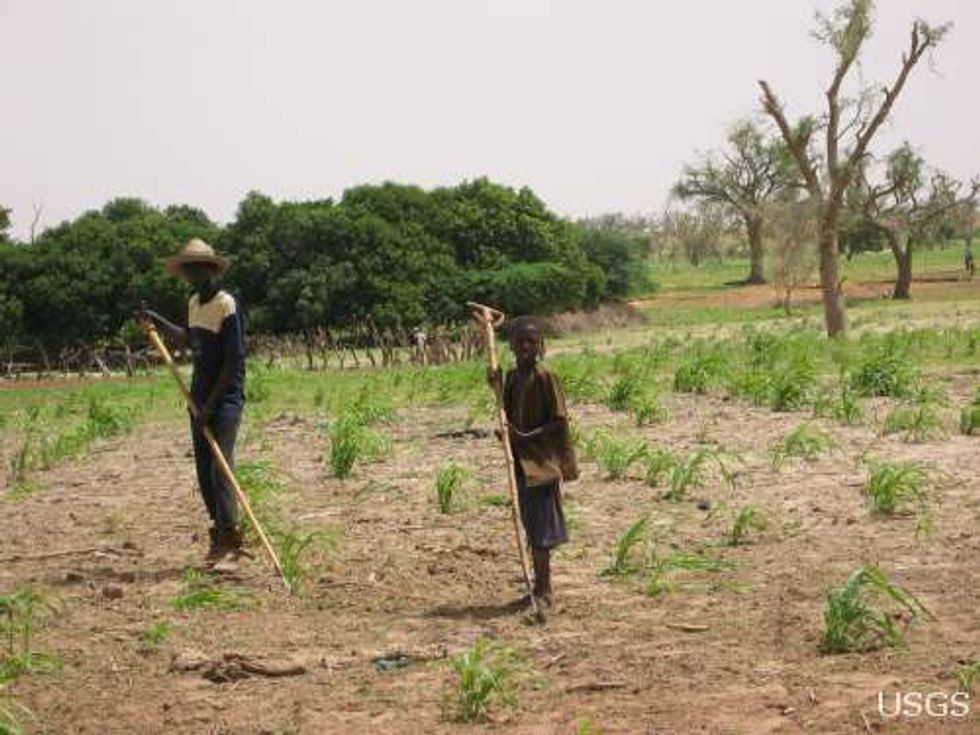 In parts of eastern Africa, drought is of increasing concern, as poor families suffer from food shortages and the inability to grow crops and sustain livestock. Stunted growth in children due to malnutrition has also been linked to climate trends in Africa.

Drought conditions are expected to continue as global temperatures continue to rise and rainfall declines across parts of eastern Africa.

This poses increased risk to millions of people in Africa who currently face potential food shortages.

What's being done to help?

The U.S. Geological Survey (USGS) is involved in a variety of research efforts to help understand current and future conditions in Africa, helping to inform plans to provide aid.

The Famine Early Warning Systems Network (FEWS NET) is one endeavor that has already made great strides in helping to address this issue. FEWS NET helps target more than $1.5 billion of assistance to more than 40 countries each year.

FEWS NET examines the populations of the developing world with the most food insecurity, identifying critical situations in which food aid will be needed. These are populations whose livelihoods are typically tied to subsistence rain-fed agriculture and pastoralism.

FEWS NET is sponsored by the U.S. Agency for International Development (USAID) Office of Food for Peace, and the USGS is actively involved.

A USGS presentation on FEWS NET will be a featured side event Nov. 30 at the United Nations 17th annual Conference of the Parties (COP-17) in Durban, South Africa. The convention's purpose is to develop international agreements and a declaration of policies and practices for combating climate change and its impacts around the world.

FEWS NET has developed its own climate services to provide decision makers with early identification of agricultural drought that might trigger food insecurity. Scientists use climate forecasts to develop forward-looking food security assessments that are based on expected agricultural outcomes for the season ahead.

Since networks of ground observation stations are often sparse or reported late in FEWS NET countries, satellite remote sensing of vegetation and rainfall fills in the gaps. Remote sensing from space allows for rapid, accurate assessments of a broad range of environmental and agricultural conditions. USGS scientists provide the technologies and expertise to support remote sensing for FEWS NET activities.

On July 20, 2011, the United Nations declared parts of Somalia as a region of famine. The decision was supported by FEWS NET and USGS observational evidence of conditions in the area.

The declaration was the culmination of early warning communications encouraging—months before the crisis—that government and other agencies pre-position food and supplies in the region.

“None of the many uses of Earth-observing satellites is more vital—or has as much potential for prompting timely humanitarian intervention—as famine early warning,” said USGS Director Marcia McNutt. “Remote sensing from space allows USGS scientists to provide rapid, accurate assessments of a broad range of environmental and agricultural conditions.”

The eastern Horn of Africa, the continental region that encompasses Somalia, has experienced two consecutive seasons of very poor rainfall resulting in the worst drought in 60 years. Crops have failed, livestock deaths are widespread and food prices are very high. While the rains this winter have been good, food prices remain high, and the food security situation remains insecure.

Other USGS research is helping to identify the impacts of a changing climate on Africa's people. Scientists recently discovered that malnutrition and dry hot living conditions are linked to stunted growth in Mali, West Africa.

USGS research found that Mali was becoming substantially warmer and a little bit drier. Scientists also knew that farmers and those who make a living raising sheep, cattle, goats, or camels were poor, and that stunted growth was occurring throughout Mali.

Scientists wondered if there could be a link between human health and increasingly warm and dry conditions.

To investigate, the USGS worked with the University of California, Santa Barbara, to study climate observations and demographic and health data. The Demographic and Health Survey program routinely compiles data from surveys in 90 countries to study trends in health and population. Scientists analyzed statistics on specific villages in Mali and found that there was a link between a warmer climate and increased stunting.

Population growth combined with the impacts of warming will further increase these health impacts.

Stunting was also linked to other factors, such as mother's education and the water supply system. Women’s education, improved water supplies and agricultural development could help to address malnutrition and stunting in Mali.

An article on this research was published in in the journal Applied Geography, by San Diego State University, the University of California, Santa Barbara, and the USGS.

The resulting warmer air and increased humidity over the Indian and western Pacific oceans produce more frequent rainfall in that region. The air loses its moisture during rainfall, and then flows westward and descends over Africa, leading to decreased rain in parts of eastern Africa. Trends toward increased frequency of drought that we are seeing now are likely to continue into the future as warming continues.

A few recent articles on this research were published in the journal Climate Dynamics, by scientists with the USGS, the University of California, Santa Barbara, and Los Alamos National Laboratory. The most recent article concludes that global warming will lead to a decrease in rainfall during the summer monsoon season, from June to September, across southern Sudan, southern Ethiopia and northern Uganda. Another article concluded that eastern Africa, particularly Kenya and southern Ethiopia, will also have a significant decrease in rainfall during the long-rains season from March to June.

USGS scientists are working hard to translate these technical studies into reports for decision makers. To date, they have completed summary fact sheets focused on Sudan and Kenya.

Scientists also found that some regions, like northern Ethiopia, are not getting drier due to current warming temperatures. Rainfall varies dramatically across all of eastern Africa, with high mountainous areas typically receiving many times the rainfall received in low-lying areas. Therefore, agricultural growth in these climatically safe regions could help offset rainfall declines in other locations.

Scientists are looking at clues and changes in nature to understand the impacts of global warming. In Africa, impacts are seen across the landscape—on farms and even in humans.

By starting with science, well-informed decisions can be made to help Africa as it faces drought, famine and health concerns.

FEWS NET partners include the USAID, Chemonics International, the USGS, National Aeronautics and Space Administration (NASA), National Oceanic and Atmospheric Administration (NOAA), and the U.S. Department of Agriculture (USDA). The Geography Department at the University of California, Santa Barbara, is a partner to the USGS in this effort.