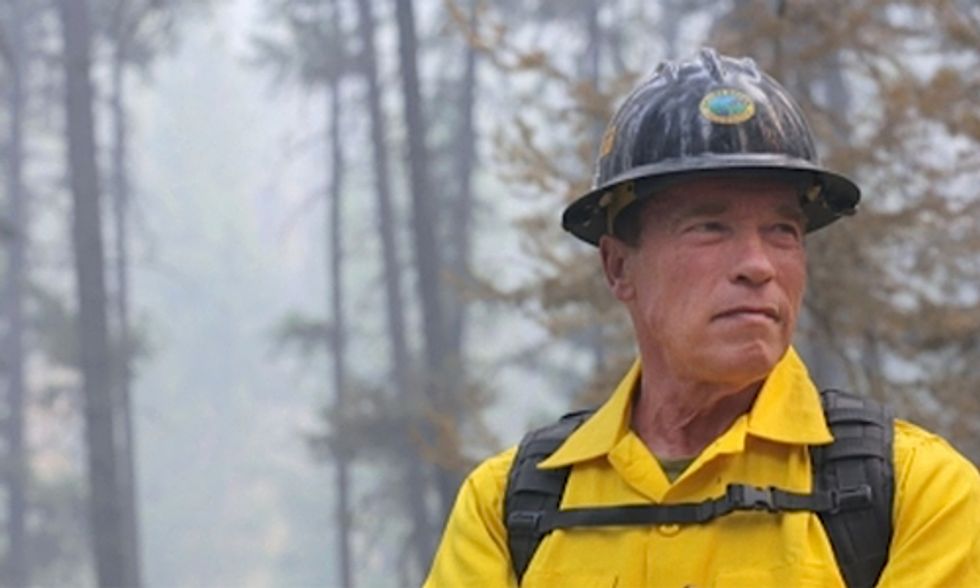 On the eve of the premiere of James Cameron’s Years of Living Dangerously, a Showtime documentary on the human impacts of climate change and forest loss, investigations by Global Witness and Friends of the Earth reveal that executive producer and co-star of the show—Arnold Schwarzenegger—has significant financial links to companies causing tropical deforestation and climate change.

“This is more than embarrassing,” said Tom Picken, forest campaign Leader at Global Witness. “It threatens to undermine the integrity of the most ambitious and accessible story about climate change ever aired.”

“This is looking less like a star-studded journey into deforestation and climate change and more like a celebrity battle between two of Hollywood’s biggest characters—the Terminator versus Indiana Jones,” Picken continued. “While co-star Harrison Ford takes on the companies plundering rain forests in Indonesia, Schwarzenegger is lining his pockets from the proceeds of that destruction."

The revelations brought to light by Global Witness and Friends of the Earth center upon Schwarzenegger’s stake in Dimensional Fund Advisors (DFA), a major U.S. investment firm which holds more than three-quarters of a billion dollars’ worth of shares in a range of logging and palm oil companies, including notorious firms implicated in destructive and illegal activities. According to a Statement of Economic Interests from 2011, Schwarzenegger has stock in DFA of "more than $1 million," the highest available category. Although these documents didn’t require his full holdings to be declared, press reports estimate Schwarzenegger’s ownership of the company to be five percent.

Episode one of Years of Living Dangerously sees Harrison Ford trekking through Indonesia’s smoldering tropical forests, cleared for palm oil cultivation at the expense of local communities and the countries’ critically-endangered orangutans. Harrison makes a personal appeal to Indonesia’s President in episode two to stop putting his country’s forests up for sale. This episode also features Schwarzenegger fighting blazing forests in the U.S. state of Idaho, which is facing more wild fires as the effects of global warming intensify.

"Mr. Schwarzenegger must not play a terminator in real life by investing in palm oil, which causes massive forest destruction, peat fires, contributes to global carbon emissions, and has triggered serious human rights abuses,” said Zenzi Suhadi, forest and plantation campaigner with Friends of the Earth Indonesia. “He must divest from deforestation and pressure his fund managers to screen their investments. Otherwise his hands are dirty from the palm oil business that earns profits at the expense of people and the planet."

Deforestation accounts for close to 15 percent of the world’s greenhouse gas emissions—about the same as the transport sector worldwide. The fastest growing cause of deforestation in the tropics is the clear-cutting of forests to make way for plantations to grow palm oil and timber for pulp and paper.

Friends of the Earth’s new report, Years of Investing Dangerously: Dimensional Fund Advisors’ Ties to Palm Oil reveals that DFA holds stock in dozens of palm oil companies, and shines a spotlight on the environmentally and socially destructive activities of several of these, including some that gain notoriety through the new Showtime TV series. DFA manages money for a wide range of public and private entities including Pepsi, Kellogg’s and Boeing; the J. Paul Getty Trust; the California Public Employees’ Retirement System (CalPERS), the cities of Seattle, San Diego, San Francisco and Kalamazoo; and numerous universities and labor unions.

“Years of Living Dangerously brings a tremendous opportunity to understand and act on the root causes of the climate crisis,” said Jeff Conant, Senior forest campaigner for Friends of the Earth U.S. “One of those root causes is runaway financing for destructive commodities like palm oil. The show’s debut offers an unprecedented platform for former governor of California and environment advocate Schwarzenegger, and all of us, to follow the money and cut our support for ecologically devastating activities.”

Together, Global Witness, Friends of the Earth and Avaaz have launched a petition calling on Schwarzenegger to terminate his investments in deforestation by pulling out of DFA, until the company develops robust social and environmental policies to prevent its investments fueling deforestation and human rights abuses.