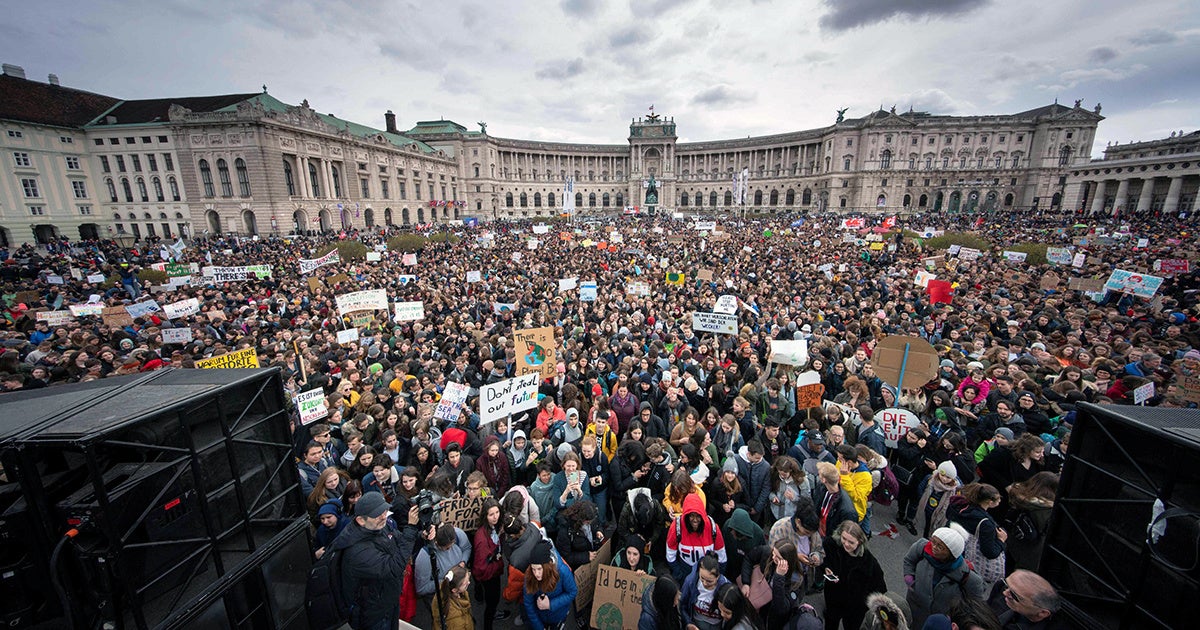 Austrian youth gather outside the Hofburg palace in Vienna for a climate protest as part of the 'Fridays For Future' movement on a global day of student protests aiming to spark world leaders into action on climate change on March 15. JOE KLAMAR / AFP / Getty Images

“We are unstoppable. Another world is possible.”

That was the message of the youth-led School Strike for Climate movement on Friday as hundreds of thousands of students across the globe walked out of class and flooded the streets to demand immediate action against the ecological crisis, which threatens to render the planet uninhabitable for future generations.

With events planned in more than 130 countries on every continent, the strikes are expected to be one of the largest global climate demonstrations in history — and they come at a time when the scientific community has never been more clear about the necessity of urgent and ambitious action.

Organizers estimate that millions of people will participate in strikes throughout the world.

“Politicians have responded with indifference to our crippling summer of record heat, bushfires, and floods. It’s no wonder so many came out in support today,” Nosrat Fareha a 16-year-old climate activist from Western Sydney, said as more than 150,000 students and adult supporters poured into the streets of Australia on Friday.

“There’s no time to stand by and wait for the bold action we need,” Fareha added.

MASSIVE! Students are still arriving in #Melborne and already the entire intersection is full.

The youth are rising (in 112 countries and counting) and they want their future back. #ActOnClimate#climatestrike #FridayForFutures #GreenNewDeal @GretaThunberg 🎬 via @STorsi pic.twitter.com/x6Ea7Xr5xt

Inspired by the tireless campaigning of 16-year-old Swedish activist Greta Thunberg, who was nominated for the Nobel Peace Prize this week, the youth-led movement for climate action quickly went global as students began walking out of class each Friday to pressure their political leaders.

“These strikes are happening today—from Washington D.C. to Moscow, Tromsø to Invercargill, Beirut to Jerusalem, and Shanghai to Mumbai—because politicians have failed us,” Thunberg and several of her fellow youth leaders wrote in the Guardian on Friday. “We’ve seen years of negotiations, pathetic deals on climate change, fossil fuel companies being given free rein to carve open our lands, drill beneath our soils, and burn away our futures for their profit.”

“Politicians have known the truth about climate change,” the students wrote, “and they’ve willingly handed over our future to profiteers whose search for quick cash threatens our very existence.”

With the mass global demonstrations on Friday, youth and their adult supporters—including members of the scientific community and trade unions—are hoping to deliver a resounding condemnation of the status quo.

“There is no grey area when it comes to survival,” declared Thunberg and her fellow youth climate leaders. “That’s why young people are striking in every corner of the globe, and it’s why we are asking that older people join us on the streets too.”

Iosef Boraei, a youth activist with Young Friends of the Earth Cyprus who helped organize strikes in Nicosia, said students are striking because young people “are on the front line of climate change.”

“We cannot leave our future in anybody else’s hands, the people in power have lost our trust, and it’s now up to us to take the lead,” Boraei said. “Governments should listen to science and to those who will be affected the most. Fossil fuels must stop being extracted, we must change politics, the current economy and all aspects of our current lifestyle—a system change. And this has to happen now.”