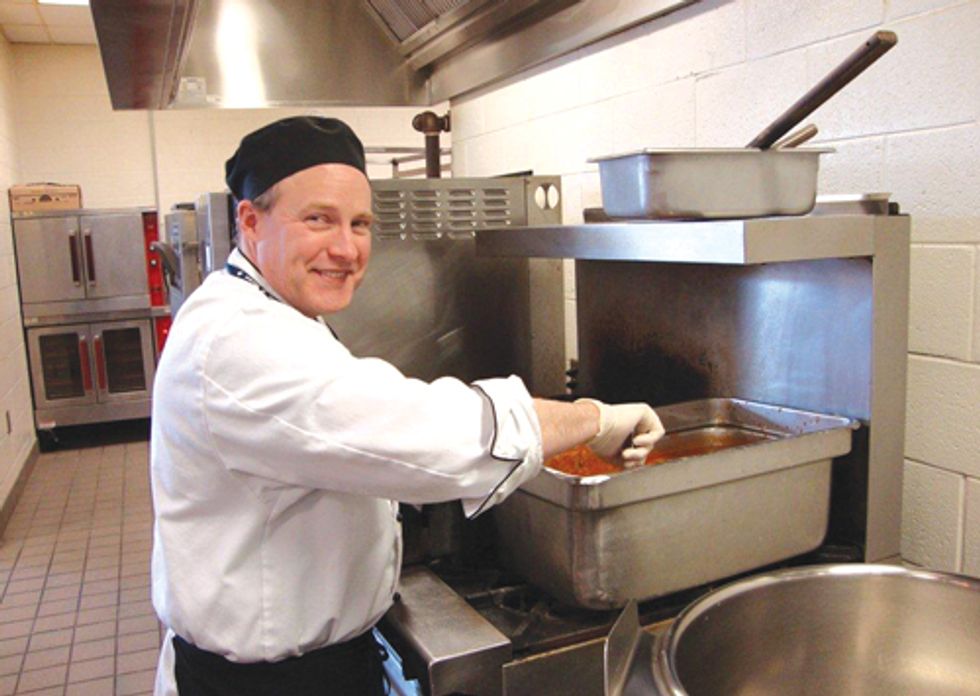 If an alien species were to visit our school cafeterias at lunchtime, it might conclude that we don’t value the health and well-being of the most vulnerable members of our society—our developing children. Not only are our youth daily served low-quality processed products, they are inculcated, at a young age, to the factory-farm model at the heart of our worst environmental problems, namely water pollution, soil erosion, global climate change and fossil fuel depletion.

Even if students learn about ecology, energy conservation and endangered species in the classroom, the real lesson is in the cafeteria, where the adults who implore students to care about the earth serve them the products most responsible for its destruction.

What if students were offered freshly-prepared meals made with locally-sourced fruits, vegetables, meats and cheeses instead of thawed processed chicken nuggets, re-heated canned vegetables, high-fructose corn syrup soft drinks and frozen potatoes fried in partially-hydrogenated oils? According to one Ohio school district:

• Students would eat more fresh fruits and vegetables, increase their cafeteria purchases and get a real education in food and farming.

• The school district would balance its cafeteria budget while investing in children’s nutrition and instilling lifelong healthy eating habits.

• Local farmers would get a guaranteed market and incentives to expand production and extend their growing season.

• The local economy would get a boost as more money would circulate locally instead of flowing to outside food suppliers.

That’s the experience of the 2,550-pupil Granville School District in Licking County 30 miles east of Columbus. While farm-to-school programs are on the rise in Ohio, perhaps nowhere has the commitment to local been greater, and results been more impressive, than at Granville. Three years into its local food initiative, Granville’s two cafeterias regularly serve healthy meals prepared on-site using raw, organic ingredients, about 40 percent of which are sourced from within 125 miles of the school (16 percent come from less than 25 miles away).

Instead of soggy green beans dumped from a can, Granville’s executive chef Greg Enslen serves fresh beans steamed but still crisp. Chips, brownies and soda have been replaced with yogurt, pudding and flavored waters. The fryer has been ditched in exchange for a steamer. Students eat with silverware on plates, not plastic on styrofoam. Rather than nitrate-laden, lunch-meat turkey, 10 to 15 turkey breasts are cooked and sliced on-site each week.

Best of all, the increased costs of local fare have been offset as more students are taking advantage of the healthier, tastier options (participation has increased by 38 percent at the district’s two cafeterias). Last year the lunch program basically broke even, with revenue of around $700,000, and lunch costs for pupils up only 10 cents.

So why haven’t more schools followed suit? Chuck Dilbone, Granville schools’ business manager and the force behind the district’s local food initiative, said that many concerns are bogus. Yes, there is enough local food produced to meet a large percentage of a school’s demand. Yes, schools can legally serve local products as long as the farms have liability insurance (which those who sell at farmers’ markets already have). A real hurdle, according to Dilbone, is that most school chefs don’t cook.

“Unfortunately we don’t do a lot of cooking in schools—we do a lot of heating, thawing and opening of cans,” Dilbone said.

So the Granville district, which previously had no onsite cafeteria, hired an executive chef and a sous chef, both with restaurant experience. (They use food service provider AVI to keep labor costs low). They invested in the mixers, coolers, ovens, steamers and other equipment necessary for healthy, from-scratch cooking. Dilbone himself approached area farmers with the district’s lunchroom needs, finding potatoes at an Amish farm, apples from a nearby orchard and beef from a farm, run by a former Granville student, whose cows graze in a field the district’s school buses pass each day.

Another hurdle, according to Dilbone, is that subsidized government commodities keep schools in the status quo. In January, Dilbone noticed government pre-packed peanut butter sandwiches—with sugar and high fructose corn syrup as main ingredients—were being sold in the elementary/intermediate school cafeteria. Why? Because they were essentially free. All Granville had to pay was the cost of shipping. Dilbone instructed the chef to begin making the sandwiches on-site using local jam and whole wheat bread instead.

After the Granville program began, Enslen, the executive chef, came to Dilbone with a problem—that students were taking too many vegetables from its unlimited fresh fruit and vegetable bar.

“That’s not a problem!” Dilbone responded. A final hurdle may be that schools need to change the way they think about food service. While Dilbone says schools shouldn’t get into the food business themselves, instead relying on food service providers like AVI, they should make sure the food they serve is the freshest and highest quality possible.

If too many students consuming too many fruits and vegetables is not the problem, then what is? The problem is that childhood obesity and diabetes rates are at all-time highs. And the problem is that industrial agriculture is killing the planet. Soil is being depleted 10 to 40 times faster than it’s being created, thanks to large monoculture commodity-crop farming practices. We are burning up fossil fuels in the production, manufacture and transport of our food at the rate of 10 calories of fossil fuel for each food calorie produced. Livestock, largely those fed industrially-produced grains at factory farms, contribute more greenhouse gas emissions than all global transportation sources combined. Agricultural runoff water laced with chemical fertilizers is creating dead zones in our coastal waters.

The next generation shouldn’t just be taught about the problems of industrial agriculture; they also should be nourished with its solution. For schools which feed students industrial food are not only hypocritical, they are also negligent in their duty to improve the lives of our youth.