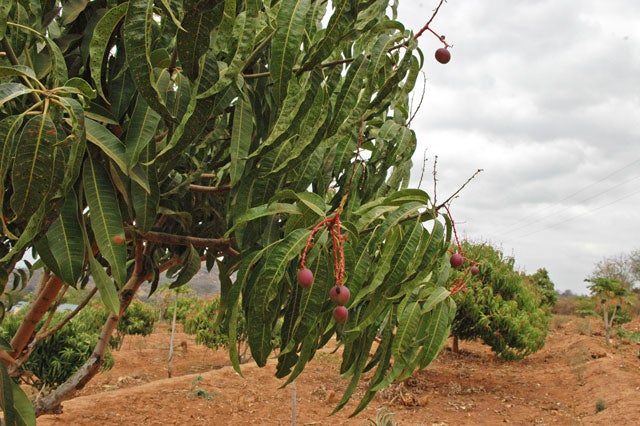 Widespread degradation and deepening scarcity of land and water resources have placed a number of key food production systems around the globe at risk, posing a profound challenge to the task of feeding a world population expected to reach 9 billion people by 2050, according to a new Food and Agriculture Organization (FAO) report published Nov. 28.

The State of the World’s Land and Water Resources for Food and Agriculture (SOLAW) notes that while the last 50 years witnessed a notable increase in food production, “in too many places, achievements have been associated with management practices that have degraded the land and water systems upon which food production depends.”

Today, a number of those systems “face the risk of progressive breakdown of their productive capacity under a combination of excessive demographic pressure and unsustainable agriculture use and practices,” the report says.

No region is immune—systems at risk can be found around the globe, from the highlands of the Andes to the steppes of Central Asia, from Australia’s Murray-Darling river basin to the central U.S.

At the same time, as natural resource bottlenecks are increasingly felt, competition for land and water will become “pervasive,” the report suggests. This includes competition between urban and industrial users as well as within the agricultural sector—between livestock, staple crops, non-food crop and biofuel production.

And climate change is expected to alter the patterns of temperature, precipitation and river flows upon which the world’s food production systems depend.

As a result, the challenge of providing sufficient food for an ever-more hungry planet has never been greater, SOLAW says—especially in developing countries, where quality land, soil nutrients and water are least abundant.

“The SOLAW report highlights that the collective impact of these pressures and resulting agricultural transformations have put some production systems at risk of breakdown of their environmental integrity and productive capacity. These systems at risk may simply not be able to contribute as expected in meeting human demands by 2050. The consequences in terms of hunger and poverty are unacceptable. Remedial action needs to be taken now,” said FAO Director-General Jacques Diouf.

Between 1961 and 2009, the world’s cropland grew by 12 percent, but agricultural production expanded 150 percent, thanks to a significant increase in yields of major crops.

But one of the “warning signs” flagged by the SOLAW report is that rates of growth in agricultural production have been slowing in many areas and are today only half of what they were during the heyday of the green revolution.

Overall, the report paints the picture of a world experiencing an increasing imbalance between availability and demand for land and water resources at the local and national levels. The number of areas reaching the limits of their production capacity is fast increasing, the report warns.

25 Percent of the Earth’s Lands are Degraded

SOLAW provides for the first time ever a global assessment of the state of the planet’s land resources. Fully one quarter are highly degraded. Another 8 percent are moderately degraded, 36 percent are stable or slightly degraded and 10 percent are ranked as “improving.” The remaining shares of the Earth’s land surface are either bare (around 18 percent) or covered by inland water bodies (around 2 percent). (These figures include all land types, not just farmland.)

FAO’s definition of degradation extends beyond soil and water degradation per se and includes an assessment of other aspects of affected ecosystems, for instance biodiversity loss.

Large parts of all continents are experiencing land degradation, with particularly high incidences down the west coast of the Americas, across Mediterranean region of Southern Europe and North Africa, across the Sahel and the Horn of Africa, and throughout Asia. The greatest threat is the loss of soil quality, followed by biodiversity loss and water resources depletion.

Some 1.6 billion hectares of the world’s best, most productive lands are currently used to grow crops. Parts of these land areas are being degraded through farming practices that result in water and wind erosion, the loss of organic matter, topsoil compaction, salinization and soil pollution, and nutrient loss.

For a breakdown of world land degradation by graph, click here.

Water Scarcity and Pollution on the Rise

Water scarcity is growing and salinization and pollution of groundwater and degradation of water bodies and water-related ecosystems are rising, SOLAW also reports. Large inland water bodies are under pressure from a combination of reduced inflows and higher nutrient loading—the excessive build-up of nutrients like nitrogen and phosphorus. Many rivers do not reach their natural end points and wetlands are disappearing.

In key cereal producing areas around the world, intensive groundwater withdrawals are drawing down aquifer storage and removing the accessible groundwater buffers that rural communities have come to rely on.

“Because of the dependence of many key food production systems on groundwater, declining aquifer levels and continued abstraction of non-renewable groundwater present a growing risk to local and global food production,” FAO’s report cautions.

“Worldwide, the poorest have the least access to land and water and are locked in a poverty trap of small farms with poor quality soils and high vulnerability to land degradation and climatic uncertainty,” the report notes.

Prospects for the Future

FAO estimates that by 2050, rising population and incomes will require a 70 percent increase in global food production. This equates to another one billion tons of cereals and 200 million ton of livestock products produced each year.

“For nutrition to improve and for food insecurity and undernourishment to recede, future agricultural production will have to rise faster than population growth and consumption patterns adjusted,” says SOLAW.

More than four-fifths of production gains will have to occur largely on existing agricultural land through sustainable intensification that makes effective use of land and water resources while not causing them harm.

Improving the efficiency of water use by agriculture will be key, according to the report. Most irrigation systems across the world perform below their capacity. A combination of improved irrigation scheme management, investment in local knowledge and modern technology, knowledge development and training can increase water-use efficiency.

FAO recently highlighted its vision for the sustainable intensification of agricultural production in its publication, Save and Grow: A New Paradigm for Agriculture, released earlier this year.

Another area where improvement is needed is increasing investment in agricultural development. Gross investment requirements between 2007 and 2050 for irrigation water management in developing countries are estimated at almost $1 trillion. Land protection and development, soil conservation and flood control will require around $160 billion worth of investment in the same period, SOLAW reports.

Finally, greater attention should be paid not only to technical options for improving efficiency and promoting sustainable intensification, but also to ensuring that national policies and institutions are modernized, collaborate together and are better equipped to cope with today’s emerging challenges of water and land resource management.

SOLAW contains numerous examples of successful actions undertaken in various parts of the world, which illustrate the multiple options available that are potentially replicable elsewhere. Given increasing competition for land and water resources, choices of options inevitably require stakeholders to evaluate trade-offs among a variety of ecosystem goods and services. This knowledge would serve to mobilize political will, priority setting and policy-oriented remedial actions, at the highest decision-making levels.