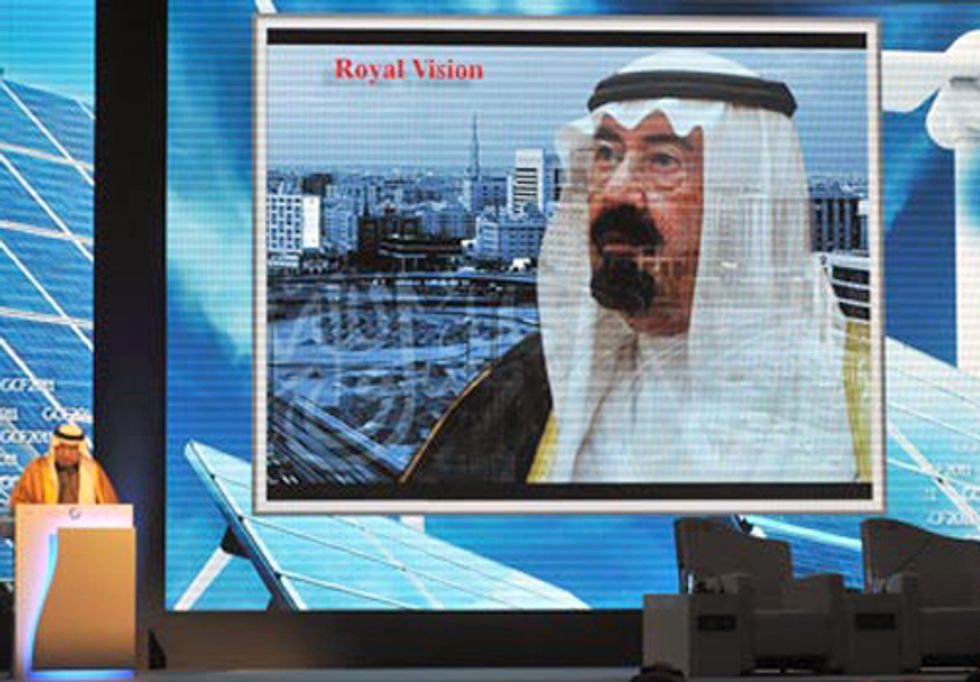 Governor Romney should visit Mecca, Saudi Arabia and learn about the planned utility-scale power plant that will generate electricity from renewables. Mecca, which hosts millions of pilgrims a year visiting Islam’s most holy shrine, is working toward becoming the first city in Saudi Arabia to operate an entire power plant from renewable energy sources.

U.S. voters should take a cue from the Middle East. In the session, Reassessing Renewable Energies, during last week's Global Economic Symposium in Rio de Janeiro, Prince Turki Al Faisal Al Saud of Saudi Arabia said, "I would like to see Saudi Arabia using 100 percent renewable energy within my lifetime."

Wow! While the oil rich kingdom of Saudi Arabia announces to the world it's embracing the goal of 100 percent green energy, most politicians in America are afraid to make such a bold statement out of fear of losing shocking sums of money that the fossil fuel industry and wealthy individuals "donate" to sway elections and manipulate legislation, a force strangling our attempt to wean ourselves from dirty energy and embrace a clean energy future.

While oil exporters look beyond the short-term and embrace a sustainable energy future, Governor Romney demands that the only way to achieve energy independence is to increase offshore oil drilling, frack all our public and private lands, pipe toxic tar sands across the breadbasket of our country and continue to blast the mountaintops in Appalachia to get every last drop of fossil fuels out of the ground while killing any strategic focus on renewable energy including the Production Tax Credit for wind. Romney blasts President Obama's investment in renewable energy and labels these efforts a nefarious job-killing "green agenda" that "has been nothing short of a disaster."

Obama's efforts to establish the U.S. as a leader in renewables has been anything but a disaster. Despite attempts to thwart efforts to green our energy agenda by many in Congress, all is not lost. Renewable Energy World reported investment in renewables climbed 17 percent to hit $257 billion last year, according to the Global Trends in Renewable Energy Investment Report for 2012, including huge advances in the U.S. The report noted:

This comprehensive analysis from the Frankfurt School of Finance & Management finds that while the U.S. closed in on China in the race to be the leading renewable energy investor, with a 57 percent leap in outlay to $51 billion, India displayed the fastest expansion rate, with its 62 percent increase to $12 billion.

Noting that one of the dominant features of 2011 was technology costs, the report concludes that with falling PV module and wind turbine prices—close to 50 percent and 10 percent respectively—the two leading renewable power technologies consequently came closer to competitiveness with fossil-fuel alternatives. However, the other key feature was a weakening in policy support in many developed countries, reflecting austerity pressures, particularly in Europe, and legislative deadlock in the U.S.

We are at a crucial time. We must push as hard as Saudi Arabia, Norway, Spain, Germany and the other countries prioritizing clean energy, to develop a federal energy policy that will lead to a sustainable energy future for our country. Renewable Energy World's article emphasizes the uncertainty of future green energy policy:

The policy hiatus, coming ironically at a time when fully competitive renewable power is starting to be a realistic possibility in a few years' time, is posing a threat to continued growth in investment in the sector in 2012 and beyond.

Luckily, not everyone in America agrees with the anti-green agenda. Vermont, for example, has plans to get off fossil fuels completely. Senator Bernie Sanders (I-VT) slams Romney, legislators and lobbyists who are trying to put the brakes on renewable energy while promoting fossil fuels, which have long been subsidized by the U.S. tax payer. The renewables-driven energy independence Sanders supports will also ameliorate the huge externalized environmental and health costs associated with fossil fuels.

We need to ask ourselves what is in America's long-term interest. What does it say about politicians who are willing to marginalize America's future by saddling up to the donor dollars waved by those who continue to enrich themselves from investments in coal and oil while squashing a renewable energy future?