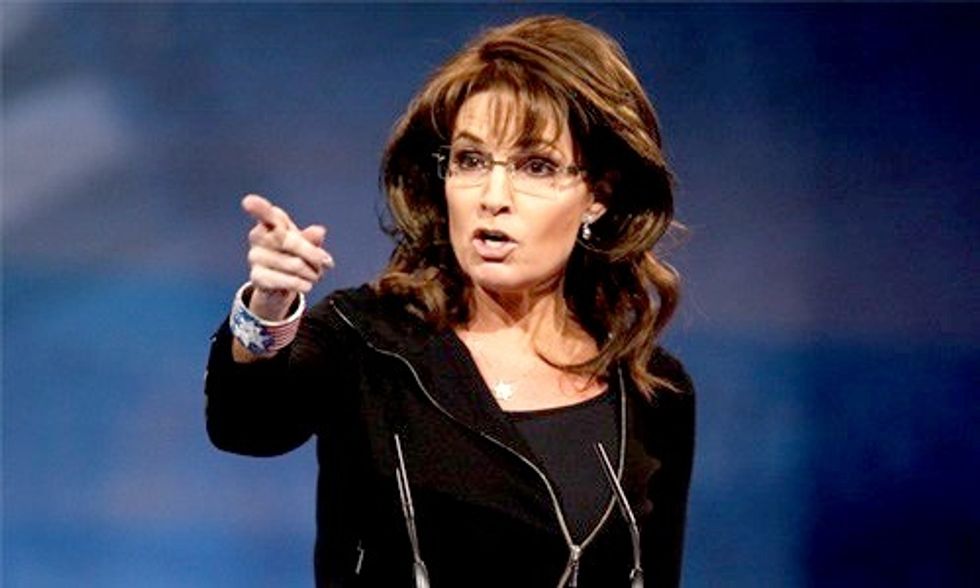 Sarah Palin says man isn’t to blame for climate change, citing the fact that some glaciers in Alaska are expanding. But an individual glacier’s growth does not disprove the existence or causes of global warming. In fact, the vast majority of glaciers in Alaska and around the world are losing ice rapidly.

Palin, the former Alaska governor and 2008 vice presidential nominee, appeared on CNN’s “State of the Union” (at the 2:25 mark). Host Jake Tapper asked if she takes climate change seriously and Palin responded:

Sept. 6: "I take changes in the weather, the cyclical changes that the globe has undergone for—since the beginning of time, I take it seriously, but I’m not going to blame these changes in the weather on man’s footprint. Obama was up here looking at, say, the glaciers and pointing out a glacier that was receding. Well, there are other glaciers, though, that are growing up here. And he didn’t highlight that, but he used glaciers as an example."

Palin may not blame climate change on humans, but science does; we have covered before how scientists say it’s extremely likely that most of the observed temperature rise has been caused by human emissions. Her claim that some glaciers are growing in Alaska is true, but this isn’t a reason to question human-caused climate change. Regional variations in precipitation patterns may cause some glaciers to grow, but most glaciers around the world are losing ice as the climate warms.

President Obama did indeed point out a receding glacier during his trip to Alaska from Aug. 31 to Sept. 2. He visited the Exit Glacier and called it “as good of a signpost as any when it comes to the impacts of climate change.” That glacier has retreated about 1.25 miles over 200 years, according to the National Park Service. Though a single receding glacier also does not provide any proof of climate change, the president talked about the wider trend. During his speech to the GLACIER conference in Anchorage, Obama said that a recent study found Alaska’s glaciers are losing 75 billion tons of ice every year. That’s accurate.

The study in question was published in the journal Geophysical Research Letters in July. Researchers from the University of Alaska at Fairbanks, the U.S. Geological Survey and the University of Washington in Seattle measured the “mass balance” of 116 glaciers in Alaska—of 616 named and many thousands of unnamed glaciers, representing 41 percent of the total glacial area—and extrapolated the results to the rest of the state. They found that Alaska’s glaciers are losing 75 gigatons of ice every year. A gigaton is equal to a billion tons of ice; one scientist has explained a gigaton this way: “If you took the whole National Mall and covered it up with ice, to a height about four times as high as the [Washington] monument. … All the way down from the Capitol steps to the Lincoln Memorial.”

Glaciers normally grow through snow accumulation in the winter and then recede by melting in the summer. But lower levels of snow accumulation or higher temperatures will lead to an imbalance in that process and the glacier will retreat and lose mass over time.

But Palin pointed out that not all glaciers are losing ice. In a post on the opinion website IJ Review, she highlighted the Hubbard Glacier in Alaska. According to NASA, the Hubbard has indeed been advancing since measurement of the glacier began in 1895, at rates ranging from 13 meters to 36 meters per year. Here is how Leigh Sterns, a glaciologist at the University of Kansas, explained the glacier’s growth for NASA: “Hubbard’s advance is due to its large accumulation area; the glacier’s catchment basin extends far into the Saint Elias Mountains. Snow that falls in the basin either melts or flows down to the terminus, causing Hubbard to steadily grow.”

In short, regional variations and increasing snowfall thanks to climate change could cause some glaciers around the world to grow, even as global temperatures rise. In fact, the pace of the Hubbard Glacier’s advance has increased since 1984, which coincides with a period of increased precipitation rates.

Just as overall global temperatures are more relevant than what happens in individual areas, the overall trend for glaciers is more relevant, too. The global and Alaskan glacial trends are toward massive loss of ice as the world has warmed. The World Glacier Monitoring Service, which runs under the auspices of the United Nations Environment Programme, the World Meteorological Organization and other partners, reports that the latest data continue “the global trend in strong ice loss over the past few decades.” This general trend is apparent in the chart below, from the WGMS.

On CNN, Tapper pushed back at Palin, saying that “90 percent of glaciers, according to scientists, 90 percent of them are—are shrinking, are melting.” According to the National Snow and Ice Data Center, based at the University of Colorado at Boulder, that’s true for alpine glaciers, which are most susceptible to retreat: “Over 90 percent of the measured alpine glaciers in the world are retreating, in almost every major glaciated region.” The NSIDC explains that the causes are “varied,” but “the underlying primary causes are a warming climate and the effects of increased soot and dust in areas of higher agricultural and industrial activity.” Both the Exit and Hubbard glaciers are alpine, of differing types—the former is a valley glacier, with its flow confined by valley walls and the latter is a tidewater glacier, which terminates into the ocean.

According to the most recent WGMS data, only 22 of the 126 glaciers it analyzed were adding mass, while 104—about 83 percent—were losing mass.

In spite of that trend, a minority of glaciers, such as the Hubbard, will likely continue to expand even with warmer temperatures. For example, a study published in 2014 in Nature Geoscience described the stable or growing glaciers of the Karakorum region in Asia. The reason for those glaciers’ deviation from the global trend has to do with localized changes to winter precipitation—snowfall, essentially, helps the glaciers stay stable or grow. The authors concluded that “[o]ur findings suggest a meteorological mechanism for regional differences in the glacier response to climate warming.” In other words, local weather patterns play a role in how glaciers respond to climate change.

Most glaciers in Alaska and around the world are losing ice as the world warms. Palin suggested that Obama was cherry-picking his glacier to make a point, but she was guilty of that trick herself.