Mouthwash Can Inactivate Human Coronavirus in a Lab, but What Does This Really Mean? 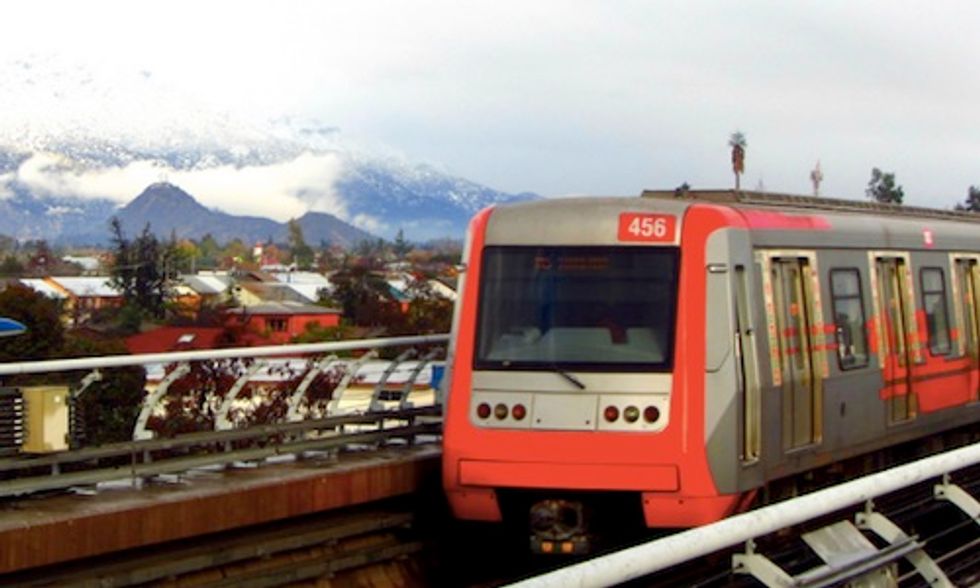 The subway system in Chile’s capital will soon be the world's first to run largely on renewable energy sources.

Santiago's metro has 103 kilometers of tracks and 108 stations, making it the second-longest metro system in Latin America after Mexico City. Photo credit: Flickr

The Metro de Santiago, the second-longest metro system in Latin America after Mexico City, has signed two agreements, one with a solar energy provider and another with a wind power company, which will provide 60 percent of metro's energy needs by 2018.

An announcement of the $500 million deal was made last week by Chilean President Michelle Bachelet during a visit to the National Stadium station that's currently under construction.

"More than two and a half million passengers use the Metro daily," she said. "[They] will not only be able to travel faster and safer; they will also be able to travel in a means of transport that cares for the planet, which reduces our carbon footprint and that makes possible a sustainable future for all."

California solar company SunPower, an affiliate of French oil company Total, will begin construction of the El Pelícano Solar Project, a 100-megawatt facility near the municipalities of La Higuera and Vallenar. The solar plant, expected to go live by the end of 2017, will supply 300 gigawatt hours per year of clean energy to Metro de Santiago, or 42 percent of its annual energy demands.

"SunPower is proud to serve Metro of Santiago's growing energy demand with cost-competitive, renewable solar power," Eduardo Medina, the executive vice president of SunPower's global power plants, said. "Solar is an ideal energy source for Chile because of the country's high solar resource and transparent energy policies. In partnership with Total, SunPower is committed to the continued growth of our business in Chile."

As for wind power, the metro will receive 18 percent of its energy needs from a 185-megawatt San Juan wind project developed by Spain-based Elecnor and owned by Brazilian renewable energy firm Latin America Power, according to Quartz.

Quartz noted that both solar and wind projects will start service in 2018 and supply the metro for the next 15 years. The metro will receive its remaining 40 percent of its energy needs from the Chilean electric distribution company Chilectra.

The Natural Resources Defense Council noted that the amount of energy generated by the wind and solar projects for the metro will be equivalent to the energy needs of 104,000 homes. Not only that, the impressive initiative is expected to mitigate 130,000 tons of CO2 emissions annually.