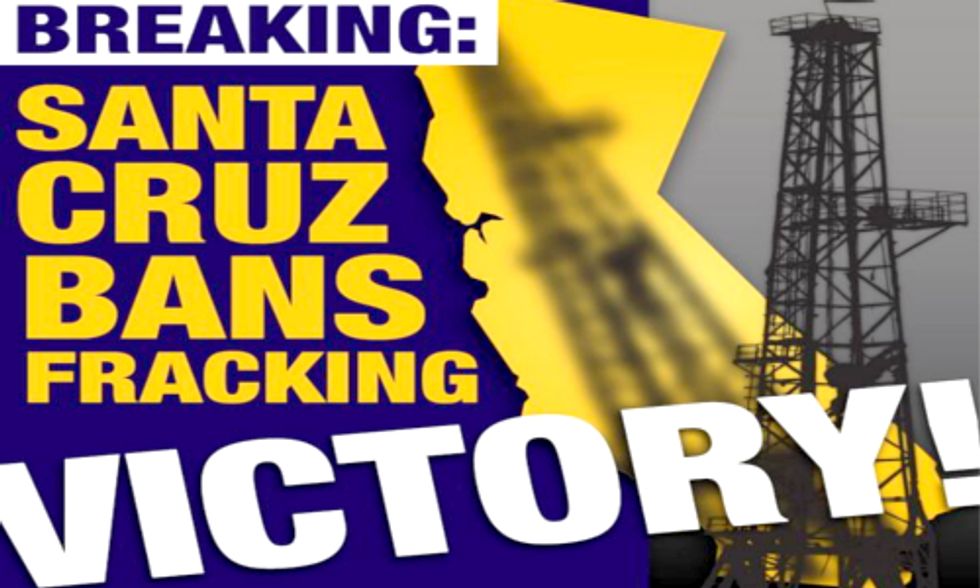 The county's board of supervisors voted 5-0 to prohibit fracking, as well as gas and oil development within its boundaries.

“We congratulate the Santa Cruz County Board of Supervisors for their historic vote towards protecting California’s air and water, and for setting a positive example for other counties and Gov. [Jerry] Brown,” said Adam Scow, California Director of Food & Water Watch.

Members of Food & Water Watch, 350.org, Environment California, Center for Biological Diversity, Californians Against Fracking, Santa Cruz Sierra Club, Women’s International League for Peace and Freedom rallied outside with students from University of California, Santa Cruz and county supervisor John Leopold after the vote to celebrate the victory. The Santa Cruz board voted last September to enact a 10-month moratorium on fracking and all oil and gas drilling. Tuesday's vote makes that decision permanent.

The vote came on the same day that the U.S. Energy Information Agency downgraded its estimate of recoverable Monterrey shale oil in California by 96 percent. Dan Haifley, executive director of the O'Neill Sea Odyssey, likened the Santa Cruz vote, along with municipal decisions around the state, to the effort to ban plastic bags years ago.

"This is very similar to the effort to ban plastic bags city by city, county by county, because it was felt that in Sacramento no progress can be made," Haifley told the Santa Cruz Sentinel. "This is taking matters into your own hands."

Butte, Mendocino, Monterey, Santa Barbara, San Benito and Orange counties are among those considering their own fracking and oil bans. Beverly Hills recently became the state's first city to ban fracking a month ago. Los Angeles working on its own ban after passing a moratorium in February.

“Santa Cruz is the first county to ban fracking in California, but it certainly won’t be the last,” said Rose Braz, Climate Campaign Director for the Center for Biological Diversity. “While Gov. Brown refuses to protect our health and environment from fracking risks, local communities across the state are moving forward with measures to fight oil industry pollution.”