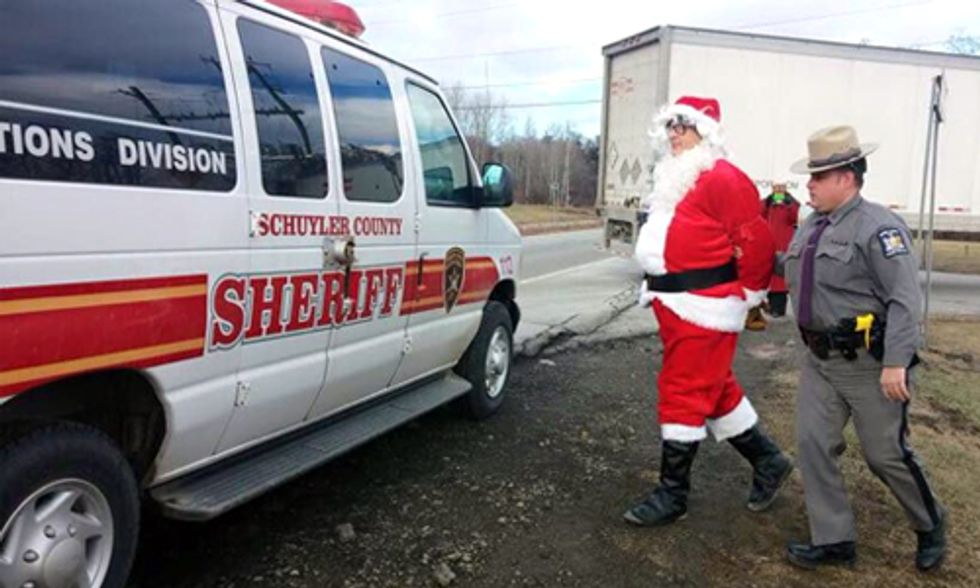 Yesterday morning nine people dressed as Mr. and Mrs. Santa Claus and their elves were arrested and charged with trespassing and disorderly conduct as they blockaded the gates of Texas-based Crestwood Midstream’s gas storage facility on the shore of Seneca Lake in upstate New York. These local residents were protesting the methane gas storage expansion project that will store highly pressurized, explosive gas in abandoned salt caverns.

The Crestwood project has faced unparalleled public opposition due to unresolved questions about geological instabilities, fault lines, possible salinization of the lake and public health concerns. Local residents are outraged that Crestwood was given approval by the Federal Energy Regulatory Commission to store two billion cubic feet of methane (natural gas) in the caverns along the western shore of Seneca Lake where the New York State DEC temporarily halted plans to stockpile propane and butane (LPG) due to ongoing concerns for safety, health and the environment.

“Don’t worry, boys and girls, I’ll be out of jail in time to deliver your presents,” said Mr. Claus, Stefan Senders of Schuyler County, as he was being handcuffed.

Yesterday’s arrests follow 28 arrests last week in a blockade lead by prominent local musicians. Members of the Irish folk band, The Grady Girls, along with acclaimed banjoist Richie Stearns and fiddler Rosie Newton, were among those arrested. While blockading a large truck from entering the gates at Crestwood, the musicians sang, danced, played instruments and held banners that read “This Land is Our Land” and “Gas/Water: Which Side Are You On?”

“When I was deciding whether to get arrested or not, I saw a sticker on my own car that said, ‘What Would Pete Do?,’” said singer and banjo musician Richie Stearns referring to legendary folk singer Pete Seeger.

The We Are Seneca Lake nonviolent, civil disobedience campaign is in its ninth week of blockades to stop construction at the gas storage facility with a running total of 170 arrests.

The project is opposed by more than 200 businesses, more than 60 wineries, 11 municipalities (including neighboring Watkins Glen) and thousands and thousands of residents in the Finger Lakes region who are concerned about the threat it poses to human health, drinking water and the local economy, including the tourism industry.