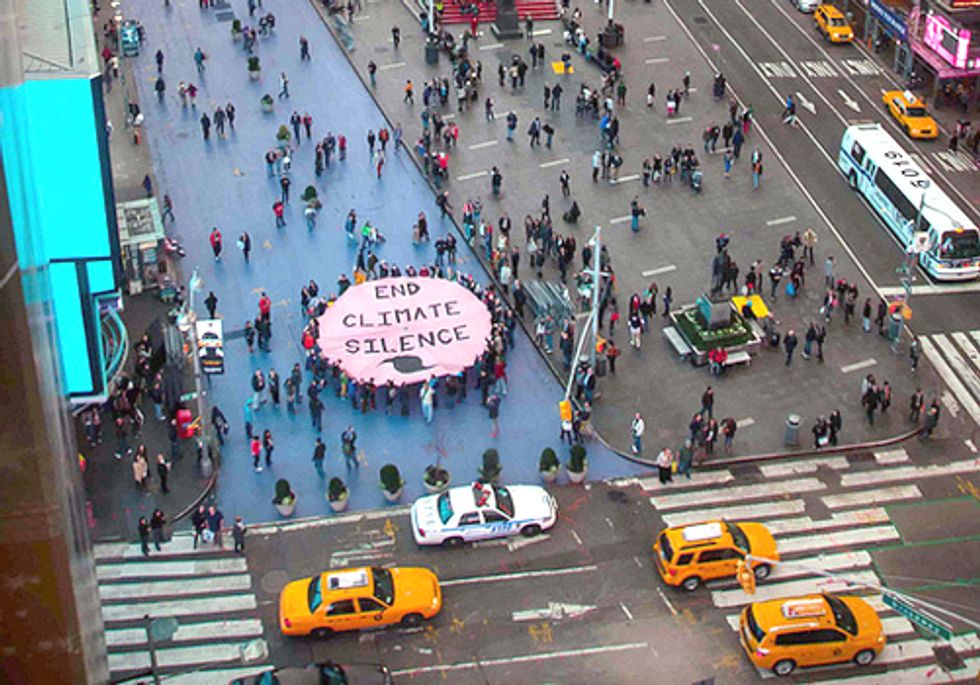 A big crowd of volunteers joined 350.org in Times Square yesterday afternoon to unfurl a giant parachute with the message “End Climate Silence” and an image of a hurricane.
Photo by Adam Welz

We woke up this morning with a deep sense of sadness.

Hurricane Sandy has brought serious hardship to many of the people we love and places we treasure. Large parts of New York City are underwater, millions are still without power and tens of thousands have been evacuated from their homes. Last night the floodwaters were swirling around the bottom floor of our Brooklyn offices.

Right now, the most important thing we can do is come together as a community and support the relief efforts that are already underway.

But we're not going to simply mourn our losses. The images coming out of the Atlantic seaboard, and from the refugee camps in Haiti, made us not just sad but angry. This storm was literally unprecedented. It had lower barometric pressure, a higher storm surge and greater size than the region had ever seen before. It's as out of kilter as the melting Arctic or the acidifying ocean. And if there were any poetic justice, it would be named Hurricane Chevron or Hurricane Exxon, not Hurricane Sandy.

These fossil fuel corporations are driving the climate crisis and spending millions to block solutions. Instead of buying climate silence, the fossil fuel industry should be funding climate relief.

We’ve set up a page where you can donate to relief efforts, as well as call on Big Oil, Coal and Gas to take the money they’re spending on political campaigning this election and put it towards disaster relief instead:

The fossil fuel industry has spent more than $150 million to influence this year’s election. Last week, Chevron made the single biggest corporate political donation since the Citizens United decision. This industry warps our democracy just as it pollutes our atmosphere. And we’ve had enough.

In the coming year, we’re going to fight both forms of this pollution. Our biggest organizing effort ever begins one week from tomorrow, the Do the Math tour that will, we hope, ignite a long-lasting campaign to force the fossil fuel industry to change. We need you to get involved—by coming out for the show, by spreading the word and joining this fight.

Sandy is what happens when the temperature goes up a degree. The scientists who predicted this kind of megastorm have issued another stark warning: if we stay on our current path, our children will live on a super-heated planet that's four or five degrees warmer than it is right now. We can't let that happen.

So let's get to work.