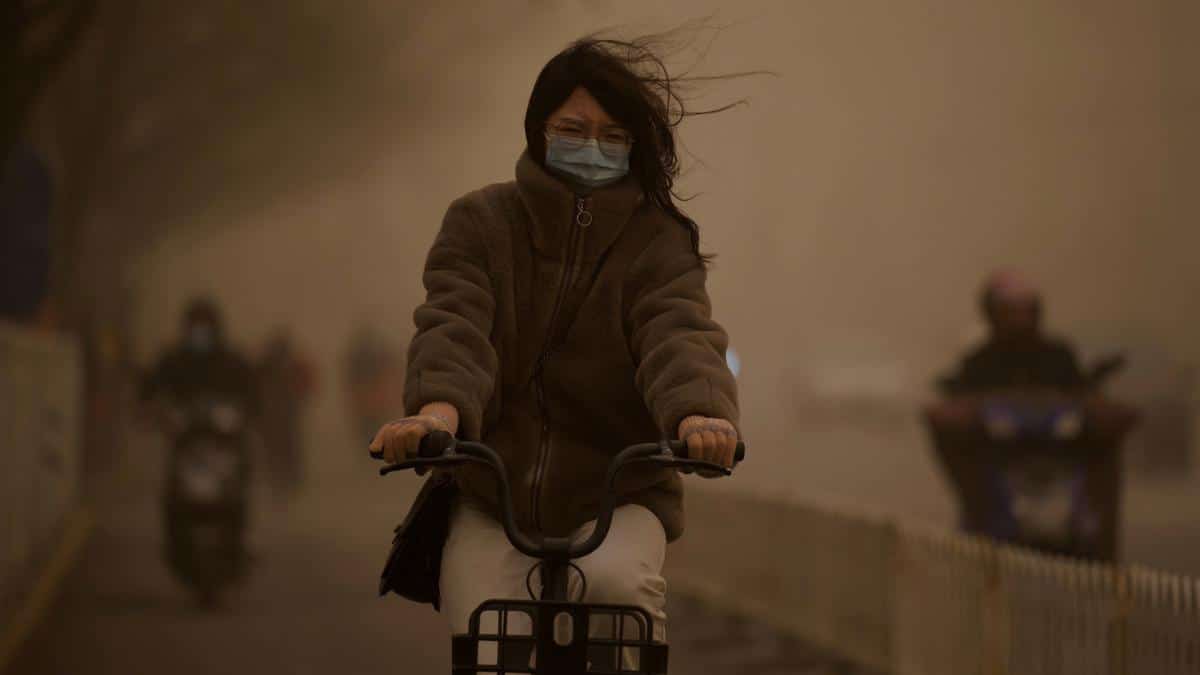 A woman cycles along a street during a sandstorm in Beijing, China, on March 15, 2021. Noel Celis / AFP / Getty Images

The sandstorm clouded northern China from Xinjiang in the far west to the Bohai Sea in the east, canceling flights and closing some schools, The New York Times reported. In Beijing, the Air Quality Index (AQI) reached a hazardous 999 at one point, according to The Guardian.

“Beijing is what an ecological crisis looks like,” Li Shuo of Greenpeace Asia wrote on Twitter. “After two weeks of smog and static air, strong wind carries a sand storm in, sending AQI off the chart. It’s hard to claim we are moving forward when you can’t see what’s in front.”

Beijing is what an ecological crisis looks like. After two weeks of smog and static air, strong wind carries a sand storm in, sending AQI off the chart. It’s hard to claim we are moving forward when you can’t see what’s in front. pic.twitter.com/m0wS5oYg6O

Beijing’s air quality had already been poor due to a resurgence of industrial activity as China emerges from the coronavirus pandemic. Li told The New York Times that industrial pollutants around the Chinese capital had surpassed the average for the last four years. Authorities in Tangshan, a steel-making city often responsible for pollution in Beijing and Hebei, said Saturday that they would punish companies for not carrying out anti-pollution measures, The Guardian reported.

Then came the sandstorm. It began as a snow storm in Mongolia over the weekend, where it cut power and led to at least nine deaths, according to The New York Times. At least 341 people in Mongolia were also reported missing, The Guardian reported.

The storm then sent the dust south, according to CNN. The concentration of larger PM 10 particles in Beijing passed 8,100 micrograms per cubic meter. The especially dangerous PM2.5 air pollutants, small particles that can infiltrate the lungs and enter the bloodstream and other organs, reached a high of 655 micrograms per cubic meter Monday. The World Health Organization has set the safe level at 25.

“In some places, there are strong sandstorms with visibility of less than 500 meters (1,640 feet),” the China Meteorological Administration said in a statement reported by CNN. “This is also the strongest dust and sand weather affecting China in almost 10 years.”

This combination of smog and sandstorm returned Beijing to the type of “airpocalypse” common a few years ago, before the government stepped up anti-pollution efforts, The New York Times reported.

“I couldn’t see the building across the street,” Wang Wei, a 23-year-old college graduate, told The New York Times. “I didn’t think the sky could be this yellow.”

The sandstorm is also a blast from China’s pre-regulation past, as they were common in the latter half of the 20th century, CNN reported. The storms used to occur twice in May, largely due to drought, a growing population and desertification in the country’s north and northwest.

Beginning in 2000, the government made an effort to implement reforestation projects and improve warning systems. These efforts paid off, and the amount of sandstorm days in Beijing fell from 26 a year in the 1950s to three after 2010.

This round of storms is expected to last through Tuesday.