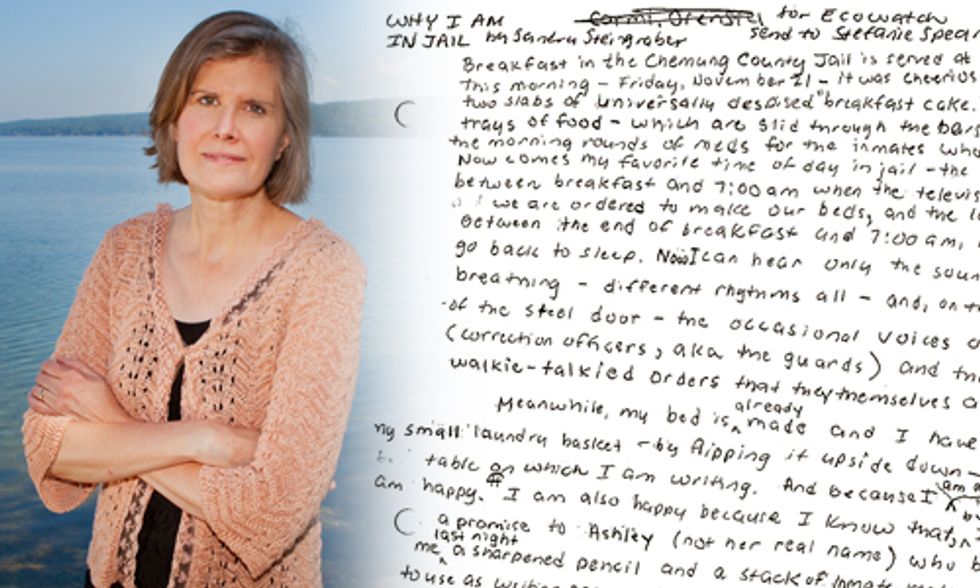 Breakfast in the Chemung County Jail is served at 5 a.m. This morning—Friday, November 21, 2014—it was Cheerios and milk plus two slaps of universally-despised “breakfast cake.” Along with trays of food—which are passed through the bars—arrive the morning rounds of meds for the inmates who take them. Now comes my favorite time of day in jail—the two quiet hours between breakfast and 7 a.m. before the television clicks on and we are ordered to make our beds and the loud day begins. Between the end of breakfast and 7 a.m., most women go back to sleep. Now I can hear only the sounds of their breathing—different rhythms all—and, on the far side of the steel door—the occasional voices of the C.O.s (correction officers, a.k.a. the guards) and the walkie-talkie orders they themselves are receiving.

Sandra Steingraber wrote this letter for EcoWatch from the Chemung County Jail this morning to share with our readers and beyond.

Meanwhile, my bed is already made and I have repurposed my small laundry basket—by flipping it upside down—into a table on which I am writing. And because I am a writer who is writing, I am happy.

I am also happy because I know that, by writing, I am fulfilling a promise to Ashley (not her real name) who brought me last night a sharpened pencil and a stack of inmate medical request forms to use as writing paper. After hearing my story—narrated through the bars of my cell as I am being kept in “keeplock” until the results of my TB screening come back—Ashley said, “I know about you Seneca Lake protesters. I read about that. But only once. You have to keep fighting. You have to write to the newspaper. You can do that from here, you know. You can’t just sit in your cell for 14 days and do nothing. You have to fight.” And then she ran off and found me paper.

Sitting on a stool outside my cell—which is welded to the far row of bars—Ashley freely dispensed advice last night for the We Are Seneca Lake movement. “Don’t give up. Keep writing the newspapers. They are always looking for stories.” She added, “I may be only 21, but I’m wise about some things.”

Here’s Ashley’s story: She was arrested two years ago—at age 19—for stealing a pumpkin. She is jailed now for violating probation. She has three kids—ages 6, 4 and 2—who are staying with her foster mother in Allegany County until she serves her time. She’ll be out the day after Christmas. Meanwhile, she’s studying for her GED and laying plans to go to college.

Half the women in my cell block are here for probation violation. One thing they all agree on: It’s almost impossible to be a single mother in search of housing and a job, both of which require mobility, and comply with probation rules, which restrict mobility. Better to do the time and then make a fresh start.

I get that. And it’s a logic that runs parallel to my own. I have come to believe that a successful civil disobedience campaign likewise depends on the willingness of at least some of us to gladly accept jail time over other kinds of sentences, such as paying fines.

There are four reasons for this. First, it shows respect for the law. In my case, I was arrested for trespassing on the driveway of a Texas-based energy company that has the sole intention of turning the crumbling salt mines underneath the hillside into massive gas tanks for the highly-pressurized products of fracking: methane, propane and butane. (The part of the plan involving methane storage has already been approved by the Federal Energy Regulatory Commission). Even before the infrastructure for this gas storage is built, Crestwood Midstream has polluted the lake with salt, at levels that exceed its legal limits. Crestwood’s response is to pay a fine and keep polluting. By contrast, I refuse to pay a fine to excuse my crime and so accepted the lawful consequences of my actions.

Second, extending one’s civil disobedience testimony in jail shows seriousness of intent. Four of the 17 civil disobedients who have so far been arraigned as part of the We Are Seneca Lake campaign have chosen jail instead of fines: 75-year-old Dwain Wilder, a veteran of the Navy who was incarcerated for Veteran’s Day; 86-year-old Roland Micklem, a Quaker, who is now incarcerated in the Schuyler County Jail [Roland Micklem was released yesterday due to health concern]; 58-year-old Colleen Boland, a retired Air Force sergeant who served in the White House; and me (I’m a 55-year-old biologist and author).

Colleen occupies the cell next to mine. We talk through the wall. Colleen, Roland and I are on track to find out what they serve prisoners for Thanksgiving dinner.

By our willing separation from our families, by our sacrifice and consent to suffer, by our very absence, we are saying that we object in the strongest terms to the transformation of our beloved Finger Lakes community into a hub for fracking. We object to the occupation of our lakeshore by a Houston-based corporation that seeks to further build out fossil-fuel infrastructure in a time of climate emergency, and in so doing, imperils a source of drinking water for 100,000 people.

Third, by filling the jails with mothers, elders and veterans, we peacefully provoke a crisis that cannot be ignored by media or political leaders. Of course, civil disobedience is always a method of last recourse, deployed when all other methods of addressing a grievance have been exhausted. We have turned over all stones. We have submitted comments, written letters, offered testimony, filed Freedom of Information requests for secret documents—only to see our legitimate concerns brushed aside. Our incarceration shows that the regulatory system is broken. So far, in the Seneca Lake campaign, there have been 59 arrests, and a majority of those have yet to be sentenced. There will be more of us in jail before the year is out.

And the fourth reason is this: spending time in jail is a time of personal transformation. Alone with a pencil, some inmate request forms for stationery, the Bible and your own thoughts, you discover that you are braver than you knew. You are doing time, and time offers the possibility of rededicating oneself to the necessary work ahead: dismantling the fossil fuel industry in the last 20 years left to us, before the climate crisis spins into unfixable, unending calamity.

Last night I learned how to create a tool for changing the channel on the television, which blares from the other side of two rows of bars. It involves twisting newspaper around a row of pencils and stiffening it with toothpaste.

Thus do the women of the Chemung County Jail—all mothers—exert agency over the circumstances of their lives and defy the status quo. That’s a skill set we all need. As Ashley scolded me last night, while passing a sharpened pencil through the bars, “You can’t just sit there for the next 14 days. Start fighting.”