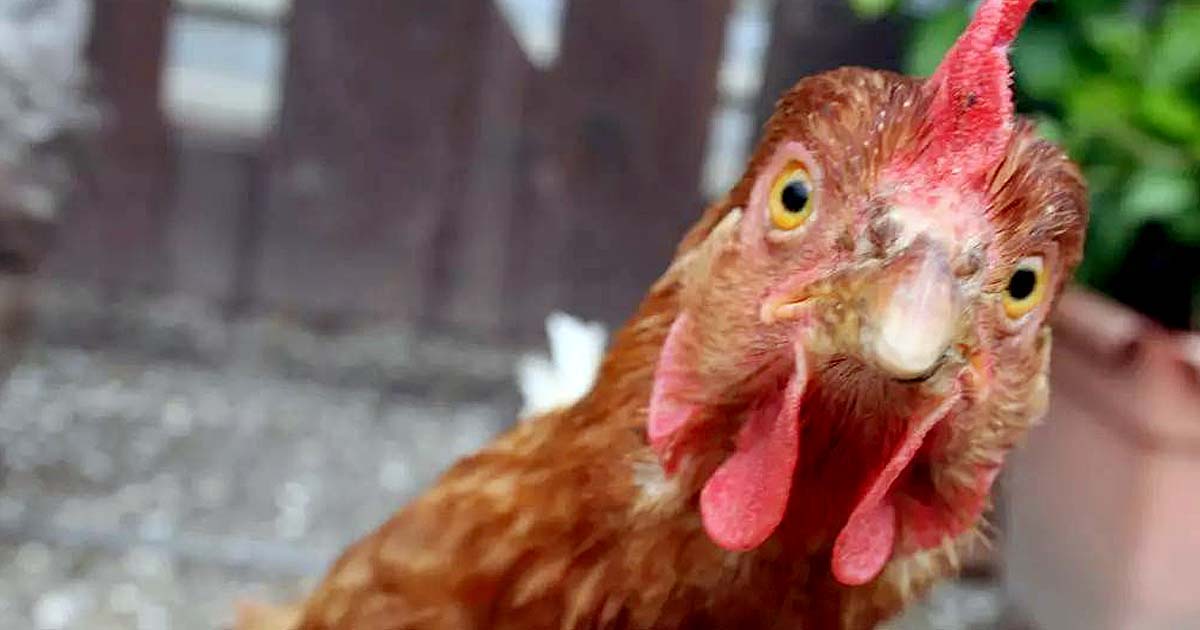 Many health conscious consumers are reducing their consumption of red meat in favor of chicken—especially products labeled and promoted as “100% natural”—believing they are a healthier option produced without routine antibiotics, artificial substances or other drugs.

Don’t be fooled. A lawsuit filed today by the Organic Consumers Association, Friends of the Earth and Center for Food Safety against Sanderson Farms for false and misleading advertising, reveals explosive evidence of drug residues and prohibited substances in Sanderson Farms’ widely promoted “100% natural chicken.”

Recent tests conducted by the National Residue Program of the U.S. Department of Agriculture’s (USDA) Food Safety and Inspection Service found traces of human and animal antibiotics, hormones, pesticides and other pharmaceutical drugs that consumers and public health experts would hardly consider “natural.” 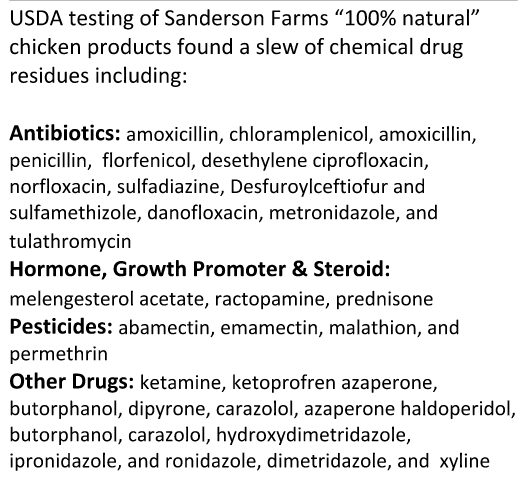 Some of these findings may sound small, but public health experts have long documented significant health risks stemming from cumulative toxic exposures in our environment and our diets, including low-dose exposures to hormones and chemicals that act like hormones in our bodies.

Residues and false marketing campaign are just the tip of an unsustainable, inhumane system.

These widespread residues are indicative of a much larger problem in our food system—the excessive use of antibiotics and other pharmaceutical drugs used to keep animals alive (and pharma companies profitable) while maintaining the filthy and inhumane factory-farm conditions that characterize industrial livestock producers.

The meat industry’s overuse and misuse of antibiotics has profound human health effects, rendering these vital life-saving medications ineffective. As documented in Chain Reaction II, at least 2 million Americans each year contract antibiotic-resistant infections, and 23,000 die as a result. The economic costs of this are huge: up to $55 billion in excess hospital expenses and lost productivity costs.

While leading firms such as Perdue and Tyson have adopted policies restricting antibiotics use, Sanderson Farms is unapologetic and outspoken against the need to address overuse of antibiotics. Yet, its ads shamelessly pronounce that there are no antibiotics in the chicken—misleading consumers when the research shows clear evidence of antibiotic residues in their chicken products.

Rather than clean up its act for the benefit of its own consumers, Sanderson has launched a highly deceptive marketing and advertising campaign, which it dubs “the truth about chicken.” Sanderson’s campaign of deception includes 5 TV ads that have received more than 200 million total impressions on broadcast TV, and misleading messages promoted via Facebook, print, radio and its website.

As described in the complaint, in one of its ads, a character named Bob says that “the slogan “raised without antibiotics” was invented to make chicken sound safer but that it doesn’t mean much because federal law requires that chickens be clear of antibiotics before they leave the farm. This gives the consumer the false impression that Sanderson’s chicken products do not contain antibiotics. This video has been viewed more than 1 million times on YouTube and 700,000 times on Facebook. Just this one commercial has an estimated 89,745,934 impressions on broadcast television, at an estimated cost of $2,293,431.”

In another video that takes place in a supermarket, Bob says that competitors used the phrase “raised without antibiotics” to get consumers to pay more money and that Sanderson Farms “doesn’t believe in gimmicks like that.” Bob then states, “No antibiotics to worry about here”—a patently false claim.

In fact, people who eat Sanderson Farms chicken, either from supermarkets such as Safeway or Kroger or at one of its big chain restaurant buyers like Darden (owner of Olive Garden), have plenty to worry about when it comes to the excessive use of antibiotics (and other drugs) in Sanderson’s chicken production. While most people don’t want a side of antibiotics or other pharmaceuticals in their chicken breast, they also worry about the public health threats stemming from the overuse of antibiotics in animal production.

“Routine antibiotic use breeds antibiotic resistant bacteria that can leave the farm on the chicken manure…on colonized workers, on vented air blasted out of poultry houses or in the soil or water, and on the meat itself … Sanderson Farms is most certainly a part of this problem. The Food and Drug Administration tests raw chicken sold in retail stores for the presence of drug resistant bacteria and routinely finds multi-drug resistant E. coli on uncooked chicken, including on chicken raised, processed, and packaged under Sanderson Farms’ control.”

Sanderson Farms’ videos, as well as numerous false and misleading statements on its website and in social media exchanges, show a repeated pattern of deceit. For example on its website, Sanderson claims, “100% natural means there’s only chicken in our chicken”—a claim that’s demonstrably false.

The lawsuit aims to hold Sanderson accountable and to empower consumers with the knowledge that there are indeed hidden substances in many Sanderson products. This leading firm is not selling pure “100% natural” chicken.

Companies like Sanderson Farms invest millions of dollars in false and deceptive advertising campaigns to persuade consumers they are getting a high quality natural product. That’s because 87 percent of purchasers, according to Consumers Reports, are willing to pay more for products called “natural.”

The case of Sanderson Farms’ deceptive product promotions is a wakeup call for consumers to stay vigilant about claims in the marketplace—and to recognize that if you are not buying a third-party certified organic or third-party certified pasture-raised, grass fed, high animal welfare product, there could likely be a cocktail of drugs and pesticides in your meat.

Kari Hamerschlag is the deputy director of the food and technology program for Friends of the Earth.