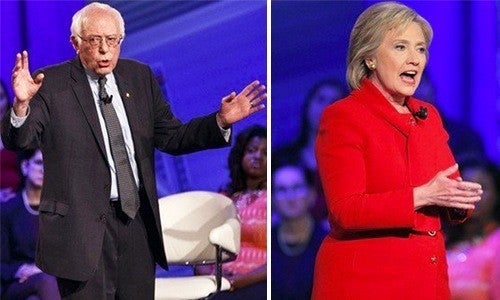 The hope of the campaign trail and the pragmatism of governing clashed at an Iowa town hall meeting Monday night, as both Bernie Sanders and Hillary Clinton each said that they had the better judgment and experience to be the 2016 Democratic nominee and nation’s next president.

It was an impressive display of two strong candidates, who, despite sharing many goals such as lessening the many forms of inequality afflicting the country, are offering decidedly different paths to achieve them. Sanders called for a political and economic revolution, where the money to meet many of America’s needs would come from confronting the wealthiest interests and using the full force of federal government to redistribute that money to benefit middle and working classes.

Bernie Sanders and Hillary Clinton battle in Iowa ahead of next week's state caucus https://t.co/xVFAnajXCQ pic.twitter.com/zCi8PgWvAJ

Clinton, for her part, emphasized that she wanted to continue the progress made under President Obama—from the Affordable Care Act at home to resurrecting a diplomacy-centered foreign policy abroad. She poignantly said that she has been fighting all forms of inequality for decades, starting with her work as young lawyer representing jailed youths to her efforts as Secretary of State championing women’s and LGBT rights.

She said Democrats are starting to realize that “the stakes in the election are really high” and that they cannot let the GOP “rip away the progress” of the Obama years. When asked by college students why she hasn’t earned their trust and affection like Sanders, Clinton replied that she sees plenty of young people working on her campaign and she simply keeps going and ignores the naysayers, because, she said that’s what she has learned to do in decades on the public stage.

“I have been on the front lines of change and progress since I was your age … I have taken on the status quo time and time again,” she said to a student before turning philosophical. “You have to keep going. Don’t get discouraged. It’s not easy.” Clinton said being president is the hardest job in the world and “you have to have a proven fighter, someone who has taken them [all the adversaries] on.”

But Sanders, in his 40 minute segment in the town hall, brushed away Clinton’s critique of his call for a political and economic revolution by reassuring Iowa voters that his career was filled with pivotal moments that showed he had the better judgment and experience to be president. In short, Sanders said that when he faced the same tough calls as Clinton, that he made the correct decision—as proven by the events that followed—and she did not.

“Yeah, I do think I have the background and the judgment to take on this very difficult job of being president of the United States of America,” Sanders said, responding to the CNN moderator who played a Clinton ad that said she was “prepared like no other.”

When CNN’s moderator played a Sanders ad for Clinton to respond to—the one with faces of Americans and a soundtrack of the Simon and Garfunkel song America, she replied, “I think that’s great. I loved it.” But Clinton continued, “You campaign in poetry and govern in prose. I love the feeling, I love the energy [of Bernie’s supporters] … But I believe that I am the better person to be the democratic nominee and president of the country.”

She then told everyone in the room that all of them would be needed to defeat the Republicans in the fall.

The town hall meeting at Drake University was the last major forum for the candidates seeking the Democratic nomination before Iowa’s 2016 caucuses on Monday. The format was a moderated discussion, where the candidates made opening and closing statements and answered audience questions pre-screened by CNN. A third segment featured former Maryland Gov. Martin O’Malley, who trails in the single digits in polls, compared to a virtual tie between Sanders and Clinton.

Sanders used the forum to sum up his campaign thus far by striking hopeful but serious notes. He said that he was surprised that his message of ending economic inequality and promoting better social safety nets has “resonated much faster (and) much farther than I thought it would.” He said that the response to his talk about confronting inequality, the rigged economy and other injustices showed that “establishment politics are just not good enough. We need bold changes. We need a political revolution.”