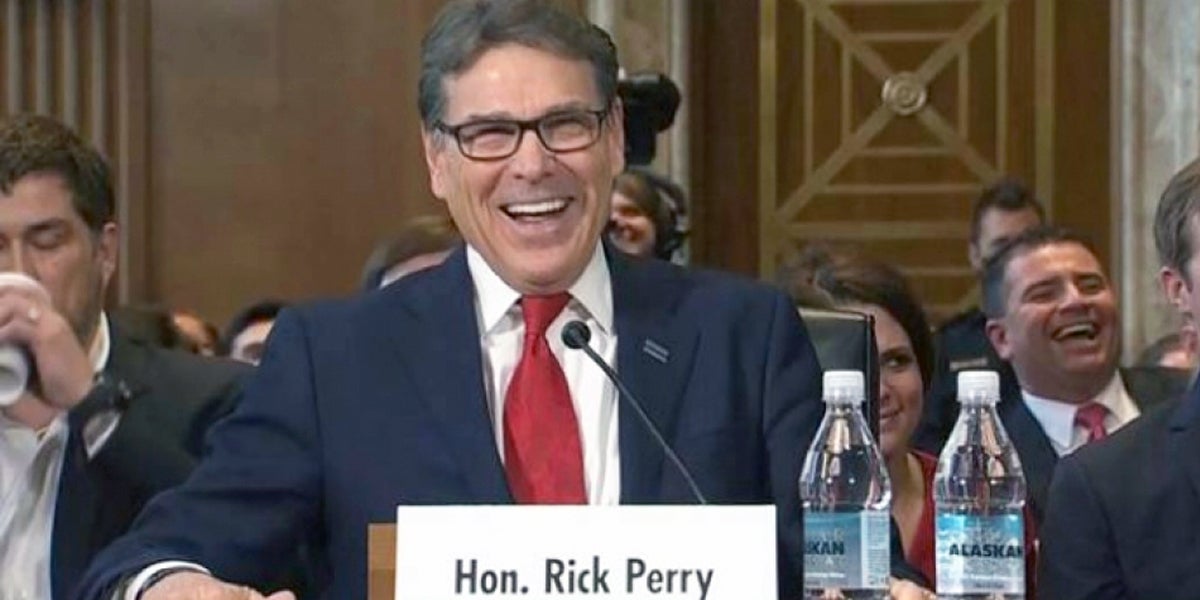 During his confirmation hearing on Thursday, former Texas Gov. Rick Perry was able to laugh off having once called for abolishing the Department of Energy, which he is now poised to lead, but Sen. Bernie Sanders (I-Vt.) refused to let him get away “sounding like a hung over frat boy,” as one observer put it, when speaking about the crisis of climate change.

Sanders repeated Perry’s own 2011 statement that he does not believe in global warming that America “should not spend billions of dollars addressing a scientific theory that has not been proven.”

“That position is a variance with virtually the entire scientific community that has studied climate change,” Sanders observed before asking, “do you still hold the views that you expressed in 2011? … Do you agree with those scientists that it is absolutely imperative that we transform our energy system away from fossil fuel to energy efficiency so that we can leave this planet in a way that is healthy and habitable for our kids and future generations?”

Perry responded by delivering what The Hill described as Republicans’ “new line on climate change.”

“I believe the climate is changing,” Perry said. “I believe some of it is naturally occurring, but some of it is also caused by manmade activity. The question is how do we address it in a thoughtful way that doesn’t compromise economic growth, the affordability of energy or American jobs.”

“Governor, I don’t mean to be rude,” Sanders interrupted. “We are in danger of spending God knows how many billions of dollars to repair the damage done by climate change. Drought is becoming a major crisis, it will impact agriculture in a very significant way.”

“Let’s get beyond the rhetoric,” Sanders continued, “the majority of scientists who study this issue think that climate change is a global crisis. It’s not a question of balance this and balance that. It is a global crisis that requires massive cuts in carbon and transformation of our energy system.”

Then stopping Perry’s interjection about his record of lowering emissions in Texas, Sanders said: “I am asking you if you agree with the scientific community that climate change is a crisis and if we need to transform our energy system to protect future generations?”

It is worth noting, as Climate Progress’s founding editor Joe Romm did, that Perry’s retort about lowering carbon and sulfur emissions speaks to his lack of knowledge as well as how Republican efforts to rollback emissions regulations are at odds with climate science.

As Romm reported, “the reductions in sulfur dioxide and NOx that Perry is now bragging about were due to EPA [U.S. Environmental Protection Agency] regulations that Republicans like Perry fought against from the get-go. And now team Trump wants to kill the EPA regulations that would keep lowering carbon emissions.”

Sanders also pressed Perry to state whether he thinks that “testing nuclear weapons is a dangerous idea.” Perry sidestepped, saying he wants “a nuclear arsenal that is modern and safe” and that he will look to nuclear scientists for answers on whether they should be tested.

Perry added, “I think anyone would be of the opinion that if we don’t ever have to test another nuclear weapon, that would be a good thing, not just for the United States, but for the world.”

Watch the exchange below:

Sanders is not the only lawmaker who took issue with Perry’s past statements on climate change.

During the hearing, Sen. Al Franken (D-Minn.) quoted Perry in 2014, when he declared: “I don’t believe we have the settled science by any sense of the imagination. Calling CO2 a pollutant is doing a disserve to the country and a disservice to the world.”

“Now,” Franken continued, “I see in your testimony that your views have been evolving on this and you note that man is responsible for some climate change. How much climate change do you think that science shows is due to human activity?”

Perry interjected: “It is far from me to be sitting before you and claiming to be a climate scientist. I will not do that.”

To which Franken retorted, “I don’t think you’re ever going to be a climate scientist, but you are going to be head of the Department of Energy.”

What the exchange below: