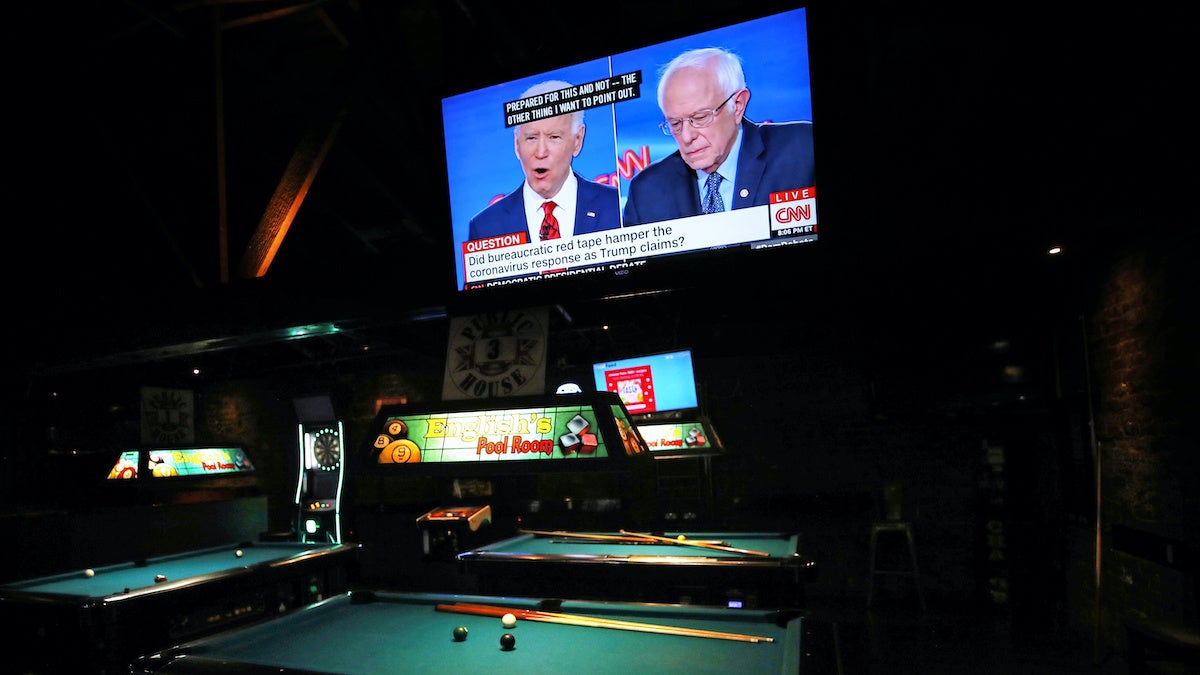 Joe Biden and Bernie Sanders speak about the coronavirus crisis on a live broadcast, in a nearly empty restaurant/bar in Los Angeles, California during the 11th Democratic Party 2020 presidential debate on March 15, 2020. Mario Tama / Getty Images

With their podiums placed six feet apart as a precaution against the coronavirus, the two leading Democratic presidential primary candidates Sen. Bernie Sanders (I-Vt.) and former Vice President Joe Biden faced off on public health and the climate crisis at the 11th Democratic debate.

Sunday’s debate came two days after President Donald Trump declared a national emergency to combat the new disease known as COVID-19, which has so far sickened nearly 165,000 people in 146 countries and led to 6,470 deaths. To help stop the spread of the virus, debate organizers CNN, Univision, the Democratic National Committee and the campaigns moved the venue from Phoenix, Arizona to CNN’s studio in Washington, DC and broadcast the debate without an audience, as moderator Ilia Calderón of Univision explained in a debate transcript provided by Rev.

But the unusual set-up led to one of the most in-depth climate discussions to date, as Grist’s Shannon Osaka pointed out.

“It only took 10 debates, a worldwide pandemic, and the winnowing of the Democratic field down to two men in their late 70s — but on Sunday night, for about 12 minutes, the American public finally got to hear a substantive debate about climate change,” Osaka wrote.

But first the candidates were asked how they would respond to the new disease. Biden called for more testing and hospital beds to be made ready, and also spoke of the need to assist people impacted by the economic cost of the pandemic, such as providing interest-free loans to small businesses.

Sanders emphasized the need to ensure that no one would have to pay for treatment if they fell ill, called for more ventilators in hospitals and also spoke of the need for economic relief.

Sanders also criticized Trump for his misleading statements about the coronavirus, such as stating that Americans with the illness would be well enough to go to work.

“Well, first thing we have got to do, whether or not I’m president, is to shut this president up right now, because he is undermining the doctors and the scientists who are trying to help the American people,” he said.

The first climate question came nearly 14 minutes into the second half of the debate. CNN’s Jake Tapper asked the candidates how their climate plans would address the fact that the climate crisis is also a “health crisis” that could lead to the spread of infectious diseases, as the World Health Organization has warned.

However, neither candidate directly answered the question. Instead, both spoke in more general terms about the seriousness of the climate crisis and the need to act immediately, though Biden did mention that the crisis already had health costs.

“[T]here’s an awful lot of people today who are in fact getting ill because of the changes in the environment,” he said.

The debate then shifted to whose plan would tackle the crisis most effectively,

“Is your plan ambitious enough to tackle this crisis?” Tapper asked.

Biden insisted it was, saying he would reinstate the environmental regulations rolled back under Trump, install 500,000 new electric vehicle charging stations, rejoin the Paris agreement and work with other world leaders to provide billion to Brazil to help protect the Amazon rainforest.

Sanders countered that Biden’s plan was “nowhere near enough.” He likened climate change to the threat posed by the coronavirus.

“[W]e started this debate talking about a warlike situation in terms of the coronavirus and we said, ‘We have to act accordingly.’ You said it. I think you’re right. I said it. We have to act dramatically, boldly, if we’re going to save lives in this country and around the world,” Sanders said. “I look at climate change in exactly the same way.”

Sanders emphasized the need to end subsidies for the fossil fuel industry, stop all oil and gas drilling and push for international action that goes beyond the Paris agreement.

Biden defended himself based on his experience of tackling the climate crisis, pointing to the fact that he wrote the first climate change bill introduced to the Senate in 1986.

“I’ve been way ahead of this curve,” he said. “This idea that all of a sudden Bernie found this out is amazing to me.”

Voters in Illinois, Florida, Arizona and Ohio will have a chance to decide which candidate’s approach they prefer when they vote in their states’ primaries Tuesday. So far, Biden is leading Sanders in the delegate count 880 to 706, according to NBC News. A candidate needs 1,991 of 3,979 total delegates to secure the nomination.