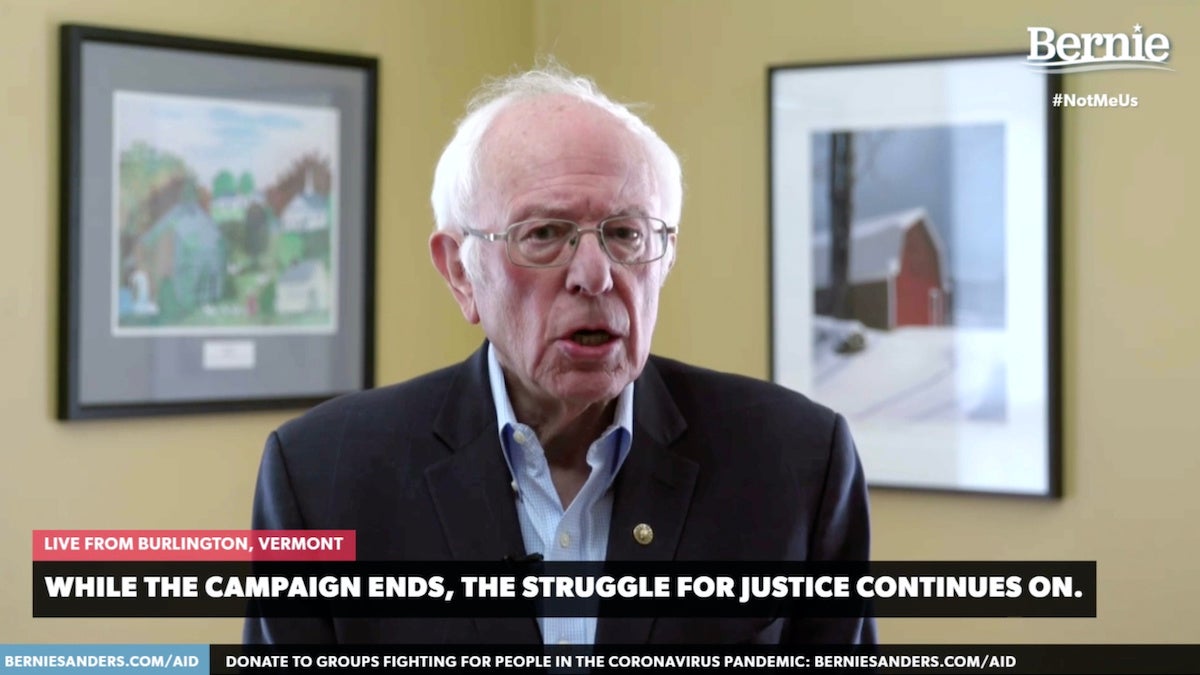 Bernie Sanders announces he is suspending his campaign via a livestream Wednesday. berniesanders.com via Getty Images

Bernie Sanders, the Independent Vermont Senator who campaigned for aggressive action on the climate crisis and environmental justice, has dropped out of the 2020 Democratic primary race.

His announcement, made Wednesday morning during a conference call with his entire staff, means the more moderate former Vice President Joe Biden will face off against President Donald Trump in November, POLITICO reported. In a speech livestreamed to supporters, Sanders said his campaign had won the “ideological battle” on issues ranging from universal health care to climate action, but that he could see no clear way to secure the nomination.

“Together we have transformed American consciousness as to what kind of nation we can become, and have taken this country a major step forward in the never-ending struggle for economic justice, social justice, racial justice and environmental justice,” he told his supporters, according to a transcript provided by The New York Times.

Today I am suspending my campaign. But while the campaign ends, the struggle for justice continues on. https://t.co/MYc7kt2b16

When Sanders first entered the race in February of 2019, he promised to release his own version of the Green New Deal, an ambitious plan to transition the U.S. from fossil fuels to renewable energy while providing jobs and addressing inequality.

When his plan dropped in August, many said it was the most progressive of the proposals of the Democratic candidates contending for the nomination. Verge summed it up at the time:

At .3 trillion spent over 15 years, Sanders’ climate deal is by far the priciest of all the Democratic candidates left in the primary race. It’s also arguably the most progressive — pushing for the US to have a carbon-free economy by 2050. The senator from Vermont also set a 2030 benchmark goal of reaching 100 percent renewable energy in the country’s two most carbon-intensive industries, transportation and the power sector, by investing in solar, wind, and geothermal power. Sanders’ plan would also declare climate change a national emergency, bring the US back on board with the Paris climate agreement, and commit 0 billion in funding to help developing nations cut their emissions and adapt to the effects of climate change.

His plan earned a 94 out of 100 on Greenpeace‘s climate scorecard and an endorsement from pro-Green New Deal group the Sunrise Movement.

But after early primary victories in New Hampshire and Nevada, Sanders began to falter beside the more moderate Biden, who won in South Carolina, and then in 10 out of 14 Super Tuesday states after other more moderate contenders threw their support behind him, POLITICO explained. Biden continued to do well throughout March, and now has 1,127 delegates compared to Sanders’ 914, according to the most recent delegate count from The New York Times.

Biden’s climate policies are more moderate than Sanders’ as of now. His plan has a much lower price tag of .7 trillion dollars and a score of 72 out of 100 from Greenpeace. The organization applauded his commitment to achieving climate neutrality by 2050, investing in clean energy and restoring international climate leadership, but faulted him for not promising to ban all oil and gas drilling on public lands and to end all federal permits for fossil fuel infrastructure.

There is a chance Biden will ultimately run on a more ambitious plan, however. Sanders said he would keep his name on the ballot in the remaining primaries to boost his delegate count in order to have more influence over the party platform.

The Biden campaign is also working to bring in Sanders’ supporters by incorporating some of his policies, The New York Times reported. In a virtual fundraiser Wednesday, Biden hinted he would add some more progressive ideas to his climate plan, and POLITICO reports he is in talks with the Sunrise Movement.

The Sunrise Movement is also one of a coalition of youth-led groups that sent a letter to Biden urging him to endorse certain policies including a Green New Deal.

But he wasn’t able to win over the vast majority of voters under 45 in the primary.

“If Joe Biden is going to be the nominee on the Democratic side, we are going to champion Joe Biden and put all muscle behind” his election, Sunrise Movement Executive Director Varshini Prakash told The New York Times. But then she addressed Biden directly, suggesting he also had work to do. “You haven’t earned our vote yet,” she said.